Here’s a handy checklist of the New Newness in single issues from DC this week, courtesy of readdc.com:

So, what are you looking forward to from DC and beyond on SDCC Eve? Kermit sure looks excited for new comics, doesn’t he? He’s cute. 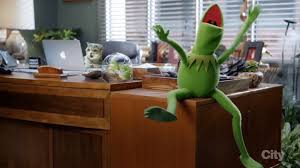 Batman #75 is also a YOTV tie-in. But it’s basically this:

Lex: Okay, what do you want?

Bane: Make sure the government doesn’t interfere with what I’m doing in Gotham.

Bane: Okay, what do YOU want?

Luthor: Tell me why you’re doing all… this.

Picked up:
Gideon Falls #15
Little Bird #5 (the final issue! This series has been so amazing!)
League of Extraordinary Gentlemen: Tempest #6 LOEG is officially over, and Alan Moore is now officially ‘retired’, for whatever that’s worth. TBH this Tempest has lost me. Was still on board through Century and the Nemo one shots, but really not sure what to make of Tempest yet. Need to re-read from the beginning.

@HCQ I had an inner inkling that Batman #75 would have something to do with YOTV. That’s good to know it is.

Anyone read Jimmy Olsen yet? It was a gas.