Hi everyone!
So I’m very new to the world of comics, I love DC’s theme (and some DCEU movies) but love their animated movies and I wanted to get some help with a few things!

Again, I’m very new to comics and I don’t even know like how to keep up with one series (I’m a little embarrassed) but how would I even keep up with a series? Like does all series start at #1?
Plz help!

Hi Genevieve! Welcome to comics! Let’s get one conception out of the way: there is no one true starting point for getting into reading the DC Universe. It’s a lifelong pursuit of discovery, and there’s absolutely no shame in starting from zero. Where to start is entirely dependent on what your tastes are.

If you like the DCEU, you might want to start with the comics which at least partially inspired them. Here’s a few for each film:

If you liked Man of Steel, try Superman: Birthright and Superman: Secret Origin.

If you’re trying to keep track of modern release schedules, leagueofcomicgeeks.com is a great resource. You can just pick a character or title that interests you, ask for an ideal starting point from any of us here, and stick with it. In the meantime, DCUI has thousands and thousands of archived comics for you to read!

As for animated movies, which ones are your favorites? I can provide some good starting points for you based on your tastes.

Some comics to consider:

Here’s a helpful video I recommend

Welcome @Genevieve21, I have read DC most of my life and I can recommend so many great series for you. Here are a few off the top of my head. Sorry if most of them are Batman related, I’m a big Batman fan

First, I will recommend stuff if you like the movies and animation.

All Star Superman
Aquaman - Most of the film stuff is based off of this run
Gotham by Gaslight
The Killing Joke
The Dark Knight Returns Snyder took huge inspiration from this book, also check out the animated film
Batman: Year One - Christopher Nolan based Batman Begins Heavily off this, and check out the animated film
The Long Halloween - The Dark Knight is based off this and is getting a animated film
Justice League: Origin - Has back up stories re-telling the story of Shazam, Served as a inspiration for Snyder’s Justice League, and has a film adaption called Justice League: War
JLA: The Tower of Babel - Inspired Justice League: Doom
Flashpoint
DC: The New Frontier
Superman: Earth One - Served as much of the inspiration for Man of Steel
Suicide Squad - The re-vamp served as base for the 2016 film
Wonder Woman and WW84 - Many concept are based off the 87 series

Now, I will recommend other stuff worth looking up on here

Other series worth checking out
Swamp Thing (Original Series) - If not the biggest fan, skip to #20 of Saga of the Swamp Thing
Saga of the Swamp Thing (Sequel Series)
Crisis on Infinite Earths
Animal Man
Doom Patrol (start at #19)
Starman
The New Teen Titans
Suicide Squad (87 series)
The Question
Harleen
Mister Miracle
Kingdom Come
Superman Rebirth
Whatever Happened to the Man of Tomorrow?
Hellblazer
Preacher
Sweet Tooth
Green Lantern/Green Arrow: Hard Travelin Heroes
Zatanna
The Sandman and Black Orchid - Not on here, but worth finding
The World’s Greatest Superheroes

@Genevieve21: Welcome to a world of action, adventure, mystery, suspense, romance, and magic. I started 55 years ago with Batman #183 and I was hooked. I hope there is a book on here that grabs you the same way. Good luck and happy reading, and remember half the fun is the journey.

In that hour and a half you will get a good overview of most of our comic book library. It was filmed in.2009 so of course can’t talk about newer than that

This is my complete list for New DC Readers. It is intended to introduce most of the major characters of the universe at a basic level. It is by year.

Comic Book Roundup is what I use to determine

What comics I buy each week

This is animation
In order

Batman Soul of the Dragon 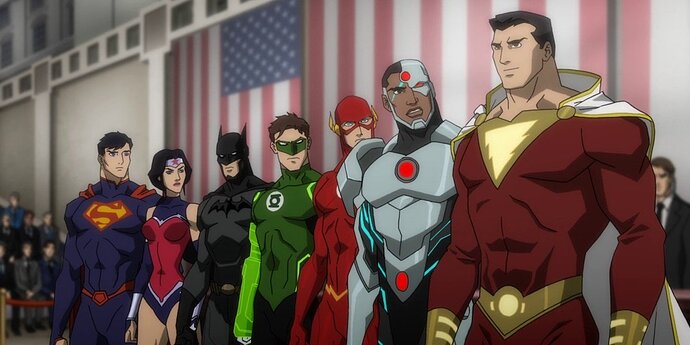 The DCEU wasn’t the only on-screen shared universe DC provided in the last decade.

The film was released on DVD and Blu-Ray July 30, 2013 and is based on the comic book series “Flashpoint” by Geoff Johns.

The film was released on January 21, 2014 and is based on the comic book “Justice League: Origin” by Geoff Johns and Jim Lee. It features the voice talents of Jason O’Mara as Batman, Alan Tudyk as Superman, Michelle Monaghan as Wonder Woman, Christopher Gorham as The Flash, Justin Kirk as Green Lantern, Shemar Moore as Cyborg, Sean Astin as Shazam, Steven Blum as Darkseid, and Rocky Carroll as Dr. Silas Stone.[6] A sequel to the film, Justice League: Throne of Atlantis, was released January 13, 2015.

Son of Batman (2014) Edit
Main article: Son of Batman
Gotham City-based vigilante Batman discovers he has a son Damian Wayne trained by the League of Assassins as Slade Wilson vows revenge on Damian for being chosen to be the heir of the League instead of him.

The film was released on January 13, 2015 and is based on comic book “Throne of Atlantis” by Geoff Johns and Ivan Reis. The film introduces Aquaman to the universe. A tie-in film titled Nightwing and Robin was released set during the events of the film.[7]

Batman vs. Robin (2015) Edit
Main article: Batman vs. Robin
Damian Wayne, Bruce’s son and now the current Robin, becomes angered at his father’s moral code. He trains with the mysterious assassin Talon to become a member of the Court of Owls, a secret organisation lurking in the shadows of Gotham.

The film was released on April 7, 2015. The film features the Court of Owls. The film is loosely based on the comic book “Batman: The Court of Owls”,[8] as well as sharing influences from “Batman and Robin: Born to Kill”.[9] A sequel to the film, Batman: Bad Blood, was released in January 2016

The film was released on January 20, 2016. It features an original story by J.M. DeMatteis. It introduces Batwoman and Batwing to the universe.[10][11] Batgirl (Barbara Gordon in the Burnside costume) also makes a non-speaking cameo appearance at the very end of the movie, right before the end credits.

The film premiered at WonderCon in Los Angeles on March 26, 2016. It introduces the Teen Titans to the universe.[12] It features an original story by Bryan Q. Miller.

Justice League Dark (2017) Edit
Main article: Justice League Dark (film)
Batman is sent to find John Constantine after a supernatural threat occurs in Metropolis, who recruits a group of other magical heroes to fight the being Doctor Destiny, revealed to be behind the threats.

The film was released April 4, 2017 and is based on the comic book “The Judas Contract” by Marv Wolfman and George Perez.

The film was announced at the 2017 San Diego Comic Con and was released on DVD and Blu-ray on April 10, 2018. It features an original story by Alan Burnett.

Despite the story being previously adapted in the first DC Universe Animated Original Movie (though not in the DCAMU), Superman: Doomsday, this said, the movie greatly altered and condensed the original comic story to fit it within a 75-minute runtime. The Death of Superman was written to be much more faithful to the original story; according to DC’s Tim Beedle, the film is “much less condensed and will include many of the fan-favorite moments from the story that were left out of Doomsday”.[17]

The film was announced July 2019 during San Diego Comic-Con.[26] Previous DCAMU voice actors are set to reprise their roles from previous films with Hynden Walch replacing Tara Strong as Harley Quinn from Suicide Squad: Hell To Pay.[27] It released on digital platforms on May 5, 2020, and is scheduled to be released on 4k/Blu-Ray DVD on May 19, 2020.[28] Christina Sotta and Ernie Altbacker provided the script while Matt Peters and Sotta directed the film. It is the final film in the DC Animated Movie Universe.[29]