I popped into a Big Lots tonight for kicks, and scored Dark Suit Batman (seen below) as well as a Robin figure in the same style box. They also had Rebirth Batman, Rebirth Nightwing and a Capullo Joker from this line. $5 each.

On the 12" figure front, they had (also from Batman Missions) Stealth Suit Batman and Clown Prince Joker (a repaint of the older black suit Joker, this time in his purple duds) and Anti-Fear Toxin Batman, who goes along with Scarecrow, whom this store didn’t have. From the Justice League movie line was a 12" Superman in battle armor. These were all $12 each (a buck an inch, what a deal!).

Dark Suit Batman might just be the most obviously named Batman figure ever. 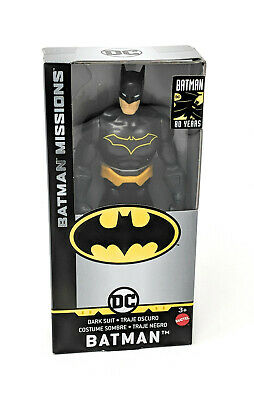 I went by two other Big Lots tonight (Tuesday):

Store A had brand new 12" Batman Missions figures, such as:

-Batwing (in his Rebirth garb, he comes with removable wings too!)
-Sub-Zero Batman (he goes with Mr. Freeze, who they also had, but he’s an older release at this point)
-Detective Batman (a blue and gray repaint of the regular 12" Batman)

They had the 6" Dark Suit Batman from my OP too, but no Robin.

Speaking of 12" Batman Missions figs, I saw the Anti-Fear Toxin Batman at Target (two of them). First time I’ve seen him at Target. No Scarecrow or Nightwing there or at Big Lots.