I am an enormous Swamp Thing fan, and I have finally read through the New 52 run.

This was…all right. Honestly, out of the 5 solo series he has had, this earns 3rd place. I do have a number of problems with it, but a lot of them can be connected more to the general New 52 initiative itself rather than just this series. It wants to restart this character from the beginning, but it also keeps events from before Flashpoint canon, except for the random stuff it retcons out. From that perspective, it is a mess.

But there is stuff that I like. The addition of The Rot is actually very cool and having Abigail Arcane choosing to become the avatar for that parliament actually does add some emotional depth. I loved Abby from the other previous Swamp Thing series, but it’s nice that she is actually having a larger role. The last story involving the birth of a Machine Kingdom is actually a very interesting idea and one that I would like to see explored in a potential future Swamp Thing series, if not in the current Justice League Dark series. There was also a couple of things involving The Green I liked, but it seemed like they made the Parliament of Trees even bigger ***holes than normal.

All in all, this series had some admittedly pretty cool and interesting stuff. A number of problems for sure, but honestly I am glad that I finally got around to reading up on this series.

I never got into New 52 Swamp Thing, I love Scott Snyder’s Batman, but his Swamp Thing feels like it’s a re-due of Len Wein’s original run, but with more of the drama and darkness of The New 52

I understand what you mean. There is some repeat, and a number of issues are more related to the general New 52 issues that plagued most series. But there was a number of new stuff that I thought was interesting and even a little cool

Some of it was good, but “The Swamp Thing Bar” was set pretty high with Alan Moore. There are bits I like, the quiter issues are the my favorites and the crossover with Jeff Lemire on Animal Man I thought was cool, but it clearly isn’t Scott’s best work, nor the best series to come out of The New 52

I agree with you there. But if we are putting it up against the past 4 Swamp Thing series, I would still put this at number 3. At the very least, we have the addition of The Rot which is actually cool and Abby was more than a simple love interest.

Yeah I would agree, not the best but has it’s moments.

Overall it was okay, the ending was rushed as hell in my opinion. there were a lot of plot holes with the Rithm, however I love the concept. also liked the Calculus b (the blue one) i felt he could be a interesting character to revisit. I like the expansion of the mythos, but its seemed all the kingdoms were disconnecting further and further as the series were continuing which was wired. I agree Abigail arcane was served justice in this series and looked very cool as the avatar of the rot. but what makes Abigail a perfect character for me was the relationship between her and swamp thing and think they lacked on that a little bit, especially towards the end. what made me love Abgail in Alan Moore’s swamp thing was the love she had towards swamp thing and there wasn’t enough of that in this series. the fungus could have been explored more as well, and at least conclude with a new avatar. i thought Woodrue could have took that place that would be very interesting. overall though I liked it, but didn’t hit me as hard as Alan Moores of course. not that it should. Scott Snyder should keep staying with batman, he understands that character way more then swamp thing, but still did a okay job.

I honestly couldn’t get into it much until Snyder left.

When Charles Soule took over (from #19 all the way to #40), I really enjoyed the comic. Having Jesus Saiz as the regular/semi-regular artist sure didn’t hurt it. That guy’s art is so wonderful. 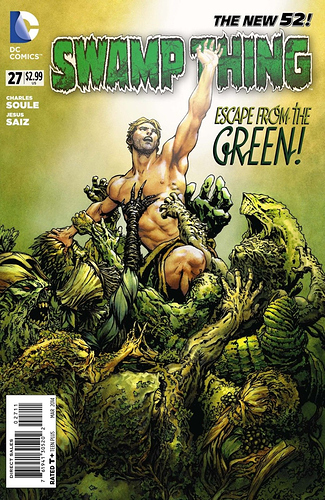