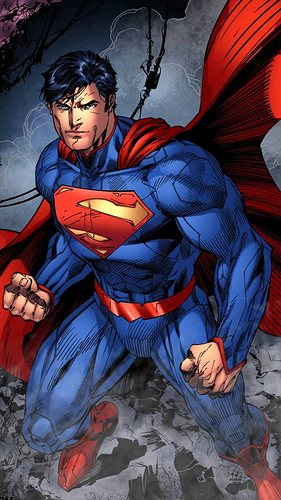 image602×1070 526 KB
I have been reading New 52 Superman and about 20 books away from finishing this series. It is easy to pick on this era due to some changes that I am not a fan of. The idea of this topic is not to dwell on those things. Instead, let’s take a step back and say things we liked or even loved about this era.

One thing I have really enjoyed is watching Cat Grant step up and become a more central figure. The clarkcatropolis.com story was great and added depth to Cat’s character. Another thing that I have noticed is that this era embraced science fiction. There are some great science fiction stories with Men of Tomorrow being one of my favorite storylines.

Does Morrison’s Action Comics run count in this era, or because of the way he wrote it is it seen as more of a prequel…?

That was New 52 era. The only reason I didn’t read Action was because I bought a bunch of Superman TPBs for like $3 a book at Ollies.

I loved Morrison’s run on Action Comics, andI loved Scott Snyder and Jim Lee on Superman: Unchained. Both were great Superman stories that were able to sidestep my least favorite aspect of the new 52- the Superman and Wonder Woman relationship.

I have noticed that they have downplayed that relationship in Superman as well. It exists but it is kind of an afterthought. There were some issues in the beginning of the series that had more Wonder Woman appearances but by the time that Geoff Johns and John Romita Jr got to it they have become slim if at all.

Morrison and Snyder’s runs were definitely a highlight, but I will say that I didn’t inherently hate the SM/WW relationship.

At the time I thought, “okay, so we’re setting up a new continuity, pulled back some old status quos, so why not do something completely new? We all know they’ll get back with their respective paramours eventually, so let’s see what can happen.”

My problem with it was that it was established, they played around a little with it for, like, a year, and then it just went no where. It was never really mentioned again in JL after Throne of Atlantis, and even in their own book together, it was constantly so bogged down with events that they never really got the chance to have stories where they were a couple together.

I think if they actually made an effort to tell more stories about the two as a couple, that little era would be more remembered.

I think if they actually made an effort to tell more stories about the two as a couple, that little era would be more remembered.

This is a good point. I wasn’t exactly a fan of it at the time but reading it again I don’t hate it. The idea is kind of weird, especially after I read the run from 2000 with the story about Superman and Wonder Woman going to Asgard for years and years and Superman would never kiss Wonder Woman because of Lois, even after he has accepted he will never see her again. However, they could have done a little more with the relationship to help sell it. There are some moments that I truly like about Clark and Diana’s relationship. In a Superman book during the Psi Wars Clark sees Lois open the door but she is in Wonder Woman’s costume. That was a lot of fun!

Yeah, it also had Diana channel her inner Han Solo, which was fun.

I cannot believe my eyes

. A thread saying something positive about New 52 Supes? You sure you’re a true DC fan, not a pretender like yours truly? Just kiddin’. Funny side story: I was just in the process of posting a comment about how my likes and dislikes seem at odds with these boards (generally speaking) and New 52 Superman was part of the comment. Ended up discarding, only to browse and find this topic. It’s fate!

First and foremost, if not for New 52, and New 52 Superman in particular, there is a big chance I would have never started this love affair I have with DC (the Trinity in particular). I’ll never forget when I curiously clicked an online add or something rather that took me to Comixology promising a whole new entry point for complete noobs like me. I was 31 years old, and other than checking out friend’s collections, I had never regularly read comics before. No preconceptions, no idea what post or pre crisis meant… only solid knowledge I had was from the movies and some shows. As I read and enjoyed what I was reading, I had no idea that fans were fuming online

. That experience in itself, has always made me feel a bit different than the typical Superman or DC Comics fan. Weird feeling that I’m not articulating very well right now. Anywho back to New 52 Supes:

Several stories that I find rather memorable:
Doomed, the Ulysses story (whatever it was called), Unchained, the Morrison run…

I am actually in the middle of the Ulysses story, Men of Tomorrow. I was reading from TPBs and while I want this to be a positive zone, they really bungled the TPBs. For example, Superman only had one chapter of Doomed and that appeared in the TPB with no backstory and it didn’t fit in with the rest of the “chapters” of that book. I did happen to have H’El on Earth and was able to catch when they did the Return to Krypton story. I figure I will read Doomed when I read all of Action Comics.

As for the costume, I wasn’t a fan of it originally but I did enjoy the story they had for it. It wasn’t just a change for visual effect but it had an actual purpose.

You are right about the no nonsense Superman. He barely has time to breathe in between all of the action, let alone write a story for Perry on time or even text Lois and Cat.

I have always read comics but it has been more of an off and on thing for me. I came back in 2011 right before New 52 so I was pretty excited for it and enjoyed it for what it was. There are problems throughout the era but I always found that I enjoyed it more than disliked it. I think I will read Unchained, Death of Superman, and Steel after this and probably move into the Rebirth stuff, which is an era of comics I have not read enough to judge one way or another.

And, this is one of the things I like to see in a Superman story. Don’t get me wrong; characterization and storytelling are foundational elements, but I really enjoy the action bits, especially when done right (i.e. they’re exciting). I sound like a total noob that has no idea what he’s talking about now

Hope you enjoy your journey into Rebirth. For me, when Rebirth came out (right after Convergence, I believe?)… I was about 5 years into the hobby. I understood what they were doing and why. However, I still remember being sad about New 52 Superman dying. It was pretty dramatic, the way they did that.

Most stuff worked, while a few things didn’t, but for me at least, it was stuff that didn’t result in the train being run off the tracks. The positives absolutely outweigh the negatives by an overwhelming longshot.

My top three favorites of the New 52 era of Superman:

Good to see you around Vroomy!

I think when there is a good balance of the action and Daily Planet crew is when Superman comics are at the best. Maybe that is because it shows Clark’s awkward humanity to balance his powerful Superman. Well that and I really like the supporting cast.

I gotta say in regards to the suit, I like how it looks in action figures and statues. As crazy as this is going to sound, I think that New 52 design stands out in plastic form.

That makes perfect sense, they were able to add more detail because of the different lines in the suit.

In terms of the comics, as it went along and they found a groove for him, I started to like the New 52 Superman. I was genuinely surprised when he died. If you had told me when the New 52 kicked off that I’d feel something when the character died, I would’ve called you a liar lol

This does bring up a challenge that they faced with New 52 and this is for the whole line. How do you recreate legacy characters? Aquaman took the lead in the beginning. I really liked Wonder Woman as well. I think that was the only time I cared about Batman comics. The hardest one to win people over is Superman. Batman and Wonder Woman they didn’t make too many changes to the character, minus relationships for Wonder Woman. On Superman they initially said everything that you know about this character is gone. He wasn’t working for Daily Planet, they took away Lois - even the will they, won’t they element, and they even took away his parents. It was too much all at once. However, once people started reading the comic that stuff seemed to not matter as much at least when it was written right.

Agreed. Both Mattel and DC Collectibles produced nifty renditions of the New 52 Superman.

Sadly, nobody has made figures of any of Superman’s three t-shirt and jeans outfits.