Name the craziest villain in Arkham! 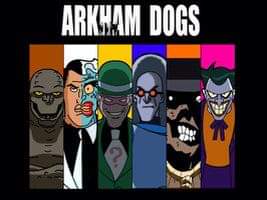 I would have to go with The Joker, he’s so unpredictable and crazy that you have no idea what’s he is going to do next!

or up, cause he’s robbing me.

I want to be an edgelord and give an answer other than the Joker, but I can’t really think of one that wouldn’t be wrong.

I mean, I guess we should define “crazy.” Almost none of them are legally insane (and thus would not be committed to Arkham in the first place, but whatever) because they understand perfectly well that their behavior is wrong and just don’t care.

The Joker’s behavior is the most unabashedly antisocial, of course. But he does have a certain internal consistency to him. He likes to behave in unexpected ways, but ultimately everything he does is essentially a twisted comedy routine he puts on for attention.

Amygdala comes to mind as an essentially good-natured man who happens to have prodigious strength and a mental disability, but is able to function when properly medicated, so he’s at least ill in a fairly straightforward and treatable way.

The Mad Hatter’s not a bad choice. He seems to have the flimsiest grasp on reality.

I have a head canon that NONE of the villains in Arkham are actually insane; they’re just pretending so they won’t get the death penalty.

I’m gonna be the black sheep and say I think Joker is one of the sanest ones in there (but also the most evil).

Correct me if I’m wrong…but does two face not practically literally suffer from D.I.D? Hence, an actual, treatable mental disorder? In comparison to most other Batman villains, who have already been discussed on this thread to not actually be “insane”, that would make him “the most so”. I don’t know though, those are just my two cents. Also, loved the mention of professor pyg on here, that’s a sadistic wack job right there if I do say so myself

Easy! Aaron Cash. What kind of psycho would choose to work at Arkham after everything. (Hey Aaron, that looks heavy. Need a hand?)

Followed by Joker. Even if he’s just pretending, he’s nuts.