Allowing it to be the biggest and most important crossover event for the entire entertainment industry content franchises for all time not just for marvel comics and dc comics which is what they have always done in the past crossing both marvel comics and/or dc comics with each other or single one of the other franchises not ever before attempting a gradual multiple crossover super project in gradually crossing as many franchises as possible. In order to neocanonically tie in/intertwine/interconnect them all in the ultimate crisis on infinite multi-multiverse judgement day fight for survival. For them, matter and spirit constituted the two fundamental and opposing components of reality. Spirit was good and matter was not just imperfect and transitory as Plato had described it, but inherently evil and therefore not the work of the true God, who was completely spirit, but of a lesser deity. And the Gnostic myths served largely to explain how the calamitous creation of the material world resulted from a perversion in the divine realm (Ehrman 164-5). Although with the characters attempting to incorporate Ying Yang cosmological balance as the solution to the Gnosticism matter and spirit cosmological dualistic conflict. With the Gnostic Creation myth possibly being the origin story for everything within Entertainment industry multimedia content franchises including marvel comics franchise, dc comics franchise, doctor who franchise and any other franchise.

These are a lot of thoughts. It’s something I’m guilty of doing from time to time, so let me rattle some idea of what you’re talking about.

In Doomsday Clock, where the prospect of a 2030 crossover with Marvel comics does appear, writer Geoff Johns bring upon the concept of Metaverse to readers that I really like. It’s the idea that in the DC universe, when changes happen in their main, continuity earth, they will change the history of the universe, which in turn change the multiverse, which in turn affects the omniverse. It’s the concept of reconing but the idea that it’s constant and alive. That the metaverse pinpoint to superman can move his trajectory to earth in time to any era and circumstances can change, but he will still become superman. The greatest hero in fiction. Now what does this mean to other fictional universes?

Despite the concept of Metaverse being recent in dc comics, understand that since ideas and writers can jump to different fictional universes, it’s likely existed in some capacity, but we don’t recognize it.

Frequently mentioned in the fantastic 4 books is a unique power source or rather multiple power sources that all heroes or superbeings in the marvel multiverse are connected to that come from a unknown energy beyond even their normal reach. Reed Richard is unable to obtain more information as of yet, Dr. Doom assume it’s a realm of infinite energy, that might be true, but he also believes it is accessible to him, that could be true but it’s most likely not.
Called the godpower theory or Doom particles by Doom himself of course. It changes fundamental concepts of how heroes are created in the marvel universe, as to why certain characters are more powerful than others. They simply are more connected to towards the sources.
It’s more innuendo than anything else, but I believe the sources are actually primordial energy of pre-existing heroes. Untapped potential of powers and ideas of what makes those sources from the heroes powerful. Ideas that are sometimes complicated by pastiche heroes and villains who corrupt it.

What God power and Metaverse have in common is the principle of being constant, abstract concepts that explain how these respective universes operate. But unlike the new gods, beyonders, Celestials, monitors, anti-monitors, endless, tribunals or even the one above all and the presence, they aren’t physical beings, nor are they partipants in a story like those mentioned above. The Metaverse and Marvel’s god power dimension in a degree are alive because they exist to be ever present, but not so much alive that they are able to interact with it. I mean you can’t talk to the sun right?

The idea of a interlocking universes is possible in all cases. With omniverse we got potential of a endless loop of our fictional favorite worlds, whether they affect each other is up to your interpretation.

Your topic was really interesting and hope you found a interesting conversation with it because everything matters, especially in the meta world of comics.

I’m sorry if I couldn’t bring in Doctor who in the conversation… I just didn’t know what to do with the star trek people involved. 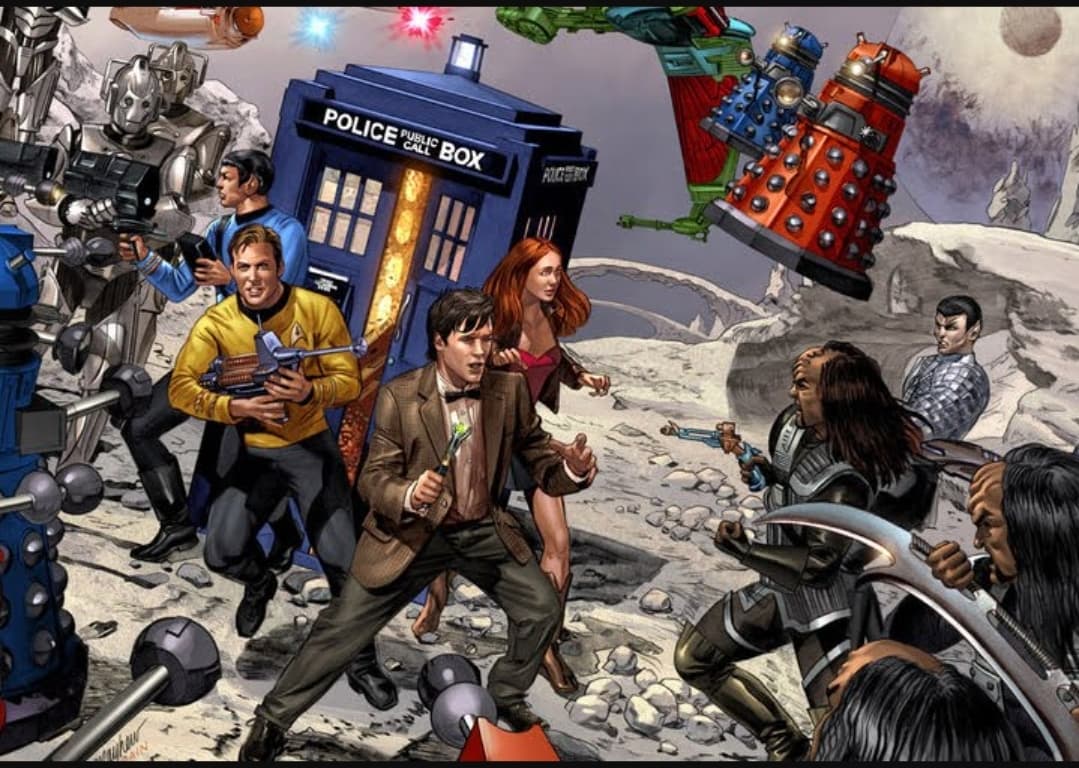 I would recommend you to research/google DC comics multiverse, DC comics Hypertime DC comics greater omniverse, Marvel comics multiverse Marvel comics Omniverse Doctor Who multiverse and Doctor Who Omniverse on fandom wiki. Since they are all mostly called the same things they are still basically given different structural characteristics that clash which sadly ultimately defeats their whole reason of being thought of to exist to explain the existence of the various intercompany crossovers within a interlocking universe and that is what i hope could be considered in overall exploration in continuity and canonical repairing.