It’s safe to say that everyone who uses this site & these Community forums is a Batman fan to some extent. As for Spawn, I decided to get into his lore starting at the beginning. And I’ll admit that I’m a strong fan of the character and his universe. Not perfect obviously. But it has a good amount of creativity and has some strong moments. Of course, it was a matter of time before I decided to share my thoughts on all the crossovers he has had with the Caped Crusader. This time though, we’ll focus on just the first one - the one penned by Frank Miller.

Let’s go easy and start with the art. Todd McFarlane’s art in the early days was a little bit hit or miss. It was more consistent in Spawn’s own book and there are some iconic shots. But it also had a lot of traditional early 90s traits to the artwork. That is especially so in this one shot. There are some panels that work well enough. However, there are more where it is too exaggerated and some spots where the drawings don’t make it clear what exactly is supposed to be going on.

And now, time to talk about the actual writing. Which brings us to…Frank Miller. It’s true that he became a comic book legend with “The Dark Knight Returns”. Between that, his story “Batman: Year One” and his work over with Marvel on the Daredevil title earned him the reputation as someone showing that comics can be for adults just as much as kids. Having said that, there is something that people need to recognize - Frank Miller fell off HARD after that. If you need proof, check out one of his most recent works, “Holy Terror”. Admittedly, this one shot is not nearly as bad as that. But it is still bad.

You remember how Frank will use bold lettering to put emphasis on certain words? That is one small aspect that deteriorated over the years. And he puts emphasis on random words throughout this book. It makes the narration and dialogue come off as erratic. But that’s the least of the problems with the writing. Miller writes Batman as some sort of parody of his version from TDKR. Always angry, impossibly stubborn, and he is only operating as a fighter. He fails to actually utilize his intellect. The story starts off with him going to New York to investigate why a bum’s head was inside a cyborg body. But he gets completely sidelined by his blind hatred for Spawn and his willingness to kill. He doesn’t even realize that the woman who asks him for his help to take down Spawn is clearly the bad guy in the story! Seriously, from her very first panel in the one shot, you can tell she is the villain in this story. She gives a speech before the big climax that is clearly one a villain trying to copy Doctor Doom’s style would present. It’s about as good as some of the stock, repetitive dialogue Batman & Spawn shoot at each other that doesn’t sound like it should be coming from either of them.

Another issue with Frank writing this story - he is clearly favoring Batman in this story. There are a couple of points where the narration is sucking up to Batman by trying to tell us just how cool and awesome he is. And when it comes to the two title characters fighting each other…we only see Batman beating Spawn. Sure, there are a handful of narration boxes telling us that Spawn is using magic to fight Batman. But did you notice that we don’t actually SEE that happening on page? Even after their first fight, we see Spawn suffering and dealing with pain, but Batman is just stoic and only puts a couple of bandages on. The only time we see Batman take a beating is from a surprise attack by cyborgs during the second fight between the title characters.

But what’s really weird about this one shot is that Spawn isn’t actually presented in a negative light. He is the one who actually realizes that the woman who sent Batman after him is behind turning bums into cyborgs. He is the one who convinces Batman they need to work together. And after the climax, even though Batman is repeatedly telling Spawn he is a menace that he will put down himself one day, Spawn is the one who still tries to offer a hand in friendship. And Batman’s response is to throw a batarang at Spawn’s face. Now, one argument I’ve heard in defense of this comic is that it is supposed to be over the top, indulge in the 90s fun. But that doesn’t work for two reason. First of all - that is out of character with what people know Frank Miller for. Sure, writers are free to write any kind of story they want anytime they feel like it. But Frank was always about proving how mature comics can be. Why would he be so willing to write mindless drivel like this, especially when he wrote TDKR not too long ago? The second reason this argument doesn’t work - while Batman is written as an exaggerated 90s grim character, Spawn is actually written to be working with some logic and has a sense of humanity and tries to show camaraderie to Batman. This story working as an over the top adventure can only work if both characters go extreme. But Spawn is actually grounded and is presented as more like-able than Batman.

So those are my thoughts on the first Batman/Spawn story. It’s pretty bad. Hopefully the next two one shots prove to be better.

I always got “laughing all the way to the bank” vibes from Miller on that one. I don’t think he took the story particularly seriously. The result was dumb but I enjoyed it well enough. Doubtful they were tossing confetti around the Library of Congress, but it was entertaining.

The DC Batman/ Spawn book took itself more seriously, but it suffered from being obviously derivative of “Gothic” from LotDK (drawn by the same artist) and having three different writers who each wrote a chunk in their own styles. Denny O’Neil knew it was a cha-ching assignment and didn’t want to show favoritism between the three Batman writers, so he gave it to all three.

One thing I liked about it was the light subversion of some classic crossover team-up maxims. I mean, the book features a lot of them – the opening fight, the two heroes narrowly beating each other, then having to work together to face a common foe. But in most of these stories, the characters end up respecting each other and saying they should work together sometime (even though their corporate overlords will likely never allow it again). We get something sort of like that in the War Devil story. But in the Miller/McFarlane story? Screw that, the characters hate each other from the start, and are still giving each other ■■■■ by the end. I wouldn’t want that kind of team-up to become the norm, but for these two, it was pretty funny and made some sense.

Fun fact about this story – it actually ends up being in continuity, in a certain sense. At the end of the story, Batman pulls a big a-hole move in throwing a batarang straight into Spawn’s face. Al carries the scar of that batarang hit for several issues after that story. 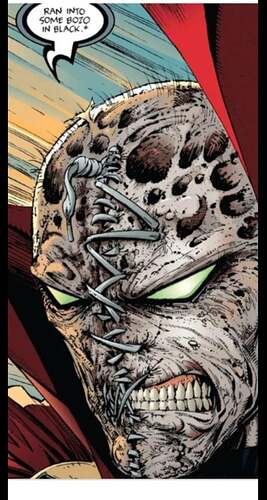 I also got that hardcover you have. It feels weird having that face scar confirm the Miller crossover is in Spawn canon because War Devil is set in it’s own separate world seperate from that crossover, general Batman canon & Spawn canon. It will be interesting to see where the 3rd crossover goes in terms of continuity.

But I’m sorry, I still think the Miller crossover is trash. I can’t call it a subversion because it isn’t actually doing anything new or smart. And while Batman is harsh to Spawn, Al is still trying to meet Batman on common ground, acting more human and grounded. It just feels like an insult to Spawn fans in several major ways.