We all knew that James Gunn’s Suicide Squad would be rated R, but not for this…

The Suicide Squad has been rated R for "strong violence and gore, language throughout, some sexual references, drug use and brief graphic nudity."

Well I guess there is another DC thing that my kids can’t watch. SMH… Does DC just want to be dark or darker for the sake of being dark or darker?

I could be wrong, but I am hoping with the Rebellion (“PG-13”) trailer, that there will be a PG-13 version.

There is very much a push for R rated films lately, and I am overall against it, but with a name like “Suicide Squad” it should be expected to be darker than stuff like “Justice League” or “The Batman.”

For the most part R Rating simply means 2 F words, which the creators like since that makes it easier to get the rating they want. With a description like that I imagine whoever dies will die in a very gory way.

I mean, it’s called “Suicide Squad.” It’s not billed as a family-friendly property.

As for DC things for your kids, well… there’s that DC Super Pets movie coming down the pipeline, and DC Super Hero Girls and Teen Titans Go are both continuing strongly apace. Plus a very strong middle grade and young adult comic line!

I think that initial trailer was a good indicator whether or not to show this to kids. It’s always up to the individual, though.

Won’t be watching it, that’s fore sure.

I get that, and my kids are 15, and they want to watch the films (not really into DC Super Pets anymore), but I am not letting them see male nudity (which "brief graphic nudity) tends to mean.

graphic nudity has to be R

they would get a lawsuit if not

After “The Suicide Squad” it looks like DC has some non-R-rated things down the line. I doubt anything other than TSS is R-rated personally. 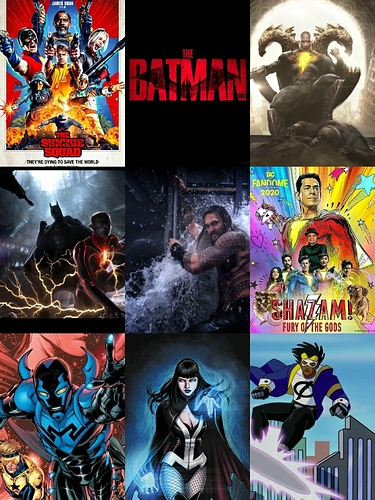 At least 6 of the first pics have release dates now everything else in question (still in development).

Edit: Hmm maybe Zatanna could be R if it’s like a Horror or Static Shock if they deal with heavy subjects. Who knows. But there’s still a fair amount of choices if that’s the case.

Part of me is hoping this fails just so the push towards more graphic content could be quelled a bit. I know Gunn is a Troma guy but still.

Call me old fashioned but I don’t like extreme graphic violence in entertainment and I’m uncomfortable with the amount of explicit nudity and sexual content in modern entertainment (especially as most of it serves no purpose other than to fill time). Modern mainstream TV and movies make 80s slasher movies look tame. And the thing is, since the shock value is no longer there they need to reach for more and more extreme stuff to try to get the same reaction.

It’s like there’s no middle ground anymore. I feel like you now only have entertainment aimed at very young children and aimed at 17+ edgelords. And I feel one of the reasons the Superhero genre does so well in cinemas in general is because it really is one of last bastions of entertainment that generally has an “all ages” appeal to it and doesn’t constantly express and reinforce a nihilistic worldview.

I’m not against darker superhero narratives (I mean Batman Returns is a favorite of mine) but a mix of tobns with the films is what i’d prefer. One of the reasons I loved Flash in ZSJL was because he seemed to love using his powers and helping people. Is it too much to ask for more of that feeling? There’s room for both I guess but I’m afraid of more of the extreme stuff. It makes the franchise as a while less accessible.

Damn it! This sucks!

Why not form a petition? Not sure of the backstory with Deadpool 2, but it worked before. Frankly, I’d rather keep it PG-13 theatrical, optional R director’s cut. But, the first Suicide Squad movie had some scenes that I think borderlined R- Harley practically being tortured by the Arkham guards to name one.

@ashleywilbanks @KingOfTheWickerPeople I agree with you both. Even though DC/WB says they don’t want to continue the Snyderverse they seem to still lean into the grim and gritty Edge Lord world.

Has PG-13 become the new G? PG-13 is for sissies and little kids. Real movies that are “adult” have to be rated R! We can’t be like Marvel, those movies are too family friendly.

Guess what? The real world is grim and gritty. I go to the movies to get away from that and ENJOY MYSELF! I don’t want to be reminded how bad the world is.

And ironically, for as much dark and grimness as MoS and BvS had…ZSJL was pretty hopeful and optimistic. And the violence, despite the R-rating…was relatively restrained. The biggest example for me being WW’s bank scene. Yeah, the guy got obliterated but it was off screen and done relatively tastefully.

And I’m far from a Snyder apologist.

Honestly this, among a few other idiotic choices (IMO) is why I have a lackluster interest in DC right now. All the new movies announced, I should be hyped, but this type thing is killing it for me…

15? There’s a good chance they’ve already seen male nudity. I wouldn’t feel comfortable watching that with my 15 yo sister but she can watch it on her own.

It’s very enlightening reading how others feel about ratings for DC movies - that being said, I will be noting your feelings so that the people up top can take into consideration details like these from our community members. Thank you for sharing your thoughts and concerns

I’m not against darker superhero narratives (I mean Batman Returns is a favorite of mine) but a mix of tobns with the films is what i’d prefer. One of the reasons I loved Flash in ZSJL was because he seemed to love using his powers and helping people. Is it too much to ask for more of that feeling? There’s room for both I guess but I’m afraid of more of the extreme stuff. It makes the franchise as a while less accessible.

Darkness has its time in a movie, but the WB films can’t seem to figure out the balance like Disney has been able to do with the Marvel films. It’s either extreme dark or extreme kookiness.

Shazam has probably been the only DC film to get this balance in a good way. Josstice League is an example of how that goes bad.

Some of these heroes take joy in what they do for people. They need to show that, as it provides an example as to why we all should be like that, even if we’re not super powered.

It’s why Batman has Robin.

If that’s the case then let me add that I think an R-rating is just fine. It makes it so the creators don’t have to be handcuffed and limit what their vision is. As HubCity said it’s called “Suicide Squad.” This isn’t the one to get all prudish about.