My (No Longer) Measly Mezco Menagerie

I am slowly accumulating One:12 figures and since they’re expensive and detailed I bought a case to minimize dust. Then due to their detail I wanted some gargoyles, then a background, then some lighting. It’s all amateur and I am ok with that. I have the Supreme Knight and Mafex Batman on order but who knows when they will be released amidst the pandemic. 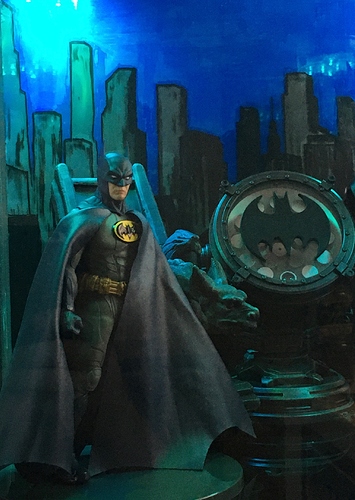 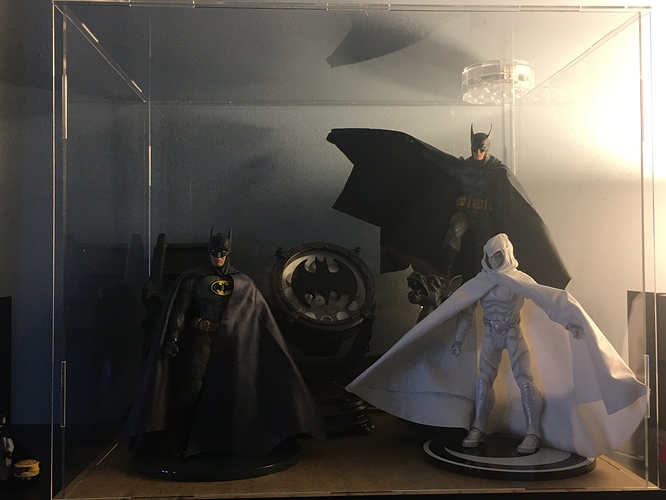 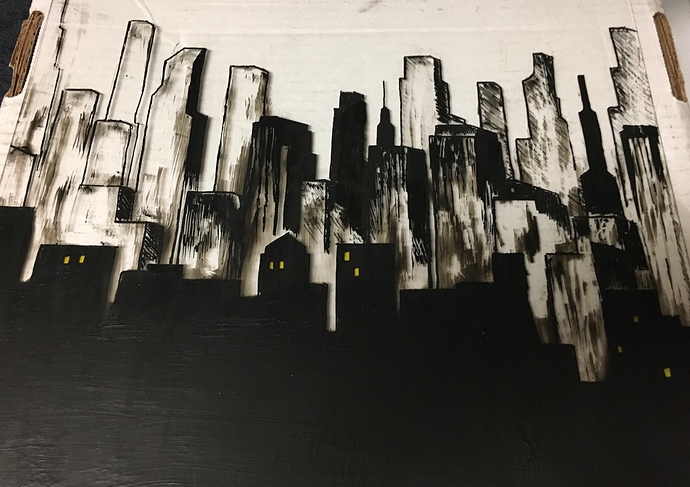 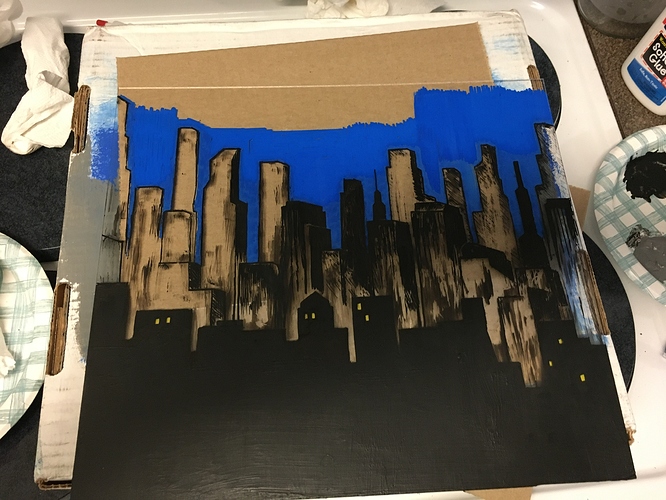 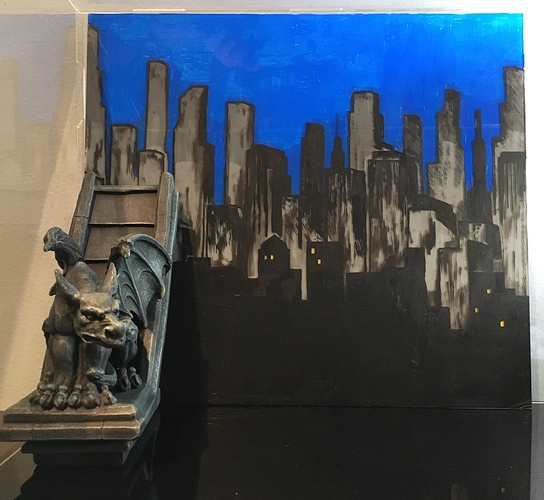 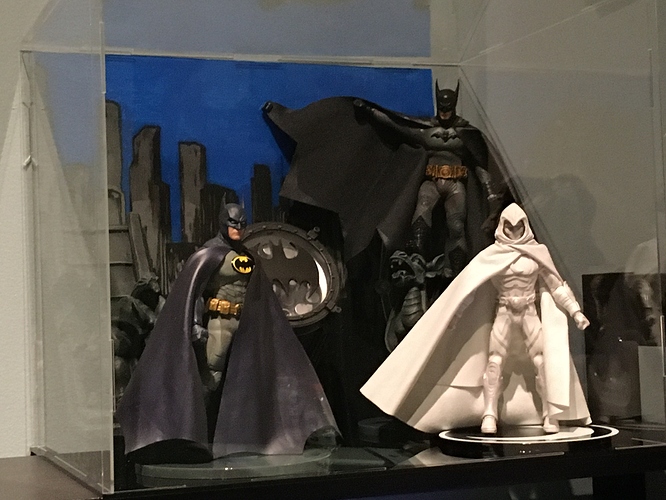 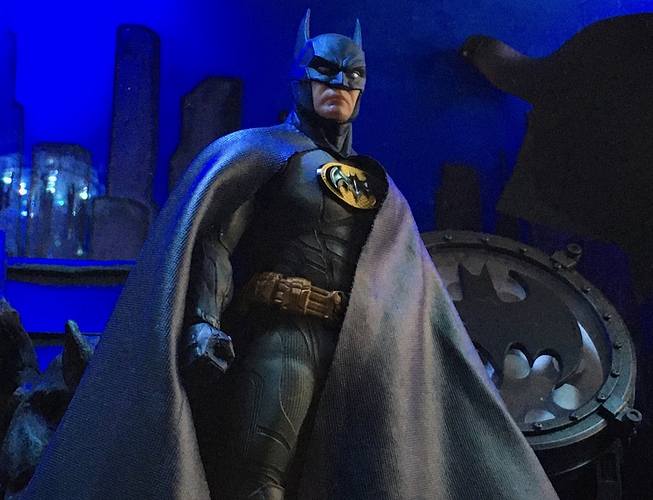 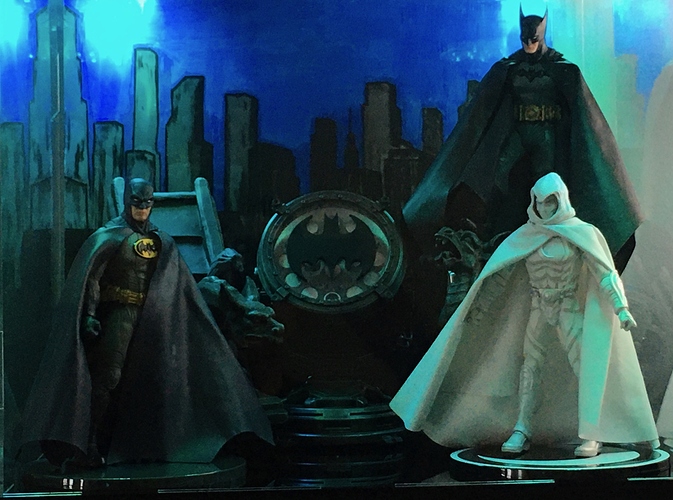 The background I painted on acrylic with black in front and gray and blue on the back. The cityscape is heavily borrowed from a Phantom City Creative print. The lights are led, about the size of a coaster. They give a nice effect but don’t photograph well.

This is such a cool display! Well done!

Thanks. It was a quarantine project, which really means work from home procrastination. I might do a background with a different color just to keep busy. I was hoping it would look cool with light behind it but it just looked streaky.

It doesn’t look amateur to me at all. I really love what you did there.

Thank you. I’m ok with amateur but I mean as a description because I don’t know the processes as well, especially the paint, not a self-dig.
Anyone know if there’s a type of paint that light could shine through but not be streaky? It was too obviously brush strokes.

This is very cool!

Thats so awesome! I picked up my first one the other day(Sovereign Knight) but I don’t have a sick backdrop like that!

Thanks. I have a large poster frame that posted so cut up the acrylic to paint on. I have some more and want try different colors and see if I can make something that can be backlit. I have Supreme Knight on preorder so I might need a new case soon.

@SWhite, this looks absolutely awesome! The figures themselves are super cool (nice to see that Anarky) but even more impressive is what you’ve chosen to do with them. I agree @ralphsix - this doesn’t appear “amateur” at all! In reply to the streakiness of the paint, I’d argue that it actually adds to the look and feel of a gritty Gotham City! Perhaps try layering with acrylic on multiple sheets or with a metallic paint. I’m a big fan of those techniques. If you’re trying to pump up the realism a bit, maybe try some Chibi lights. They’re not too expensive and are very versatile and fun to work with. Can’t wait to see you expand on this killer display! Thank you for sharing!

Thank you, that was a well timed read after a long day.

You are most welcome @SWhite!

Got Mezco Darkseid and I’m experimenting with backgrounds. I didn’t think to turn on the eyes and regret it very much. I did this by “painting” a piece of acrylic with food coloring and clear glue. So far it’s just taped to the back of the case. I’m working on a new background for the Batman case using the same idea. The light here is just my patio door. 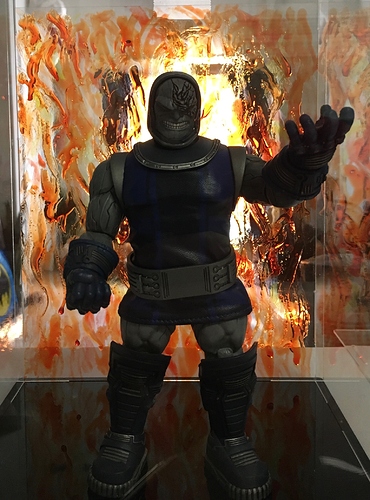 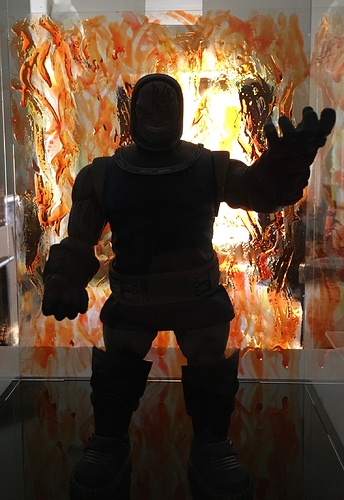 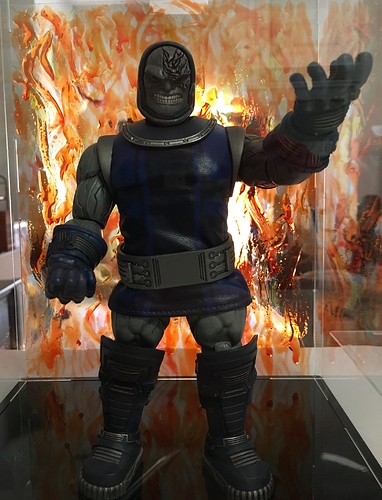 @moro. So this happened. At this point, including preorders, I am only missing the blue Ascending Knight. I may need to start a support group for Mezco impulse buying.
Still working on Darkseid from the above post. The sheet I am painting on isn’t as tall as the case so I might do some kind of city scape on the bottom. 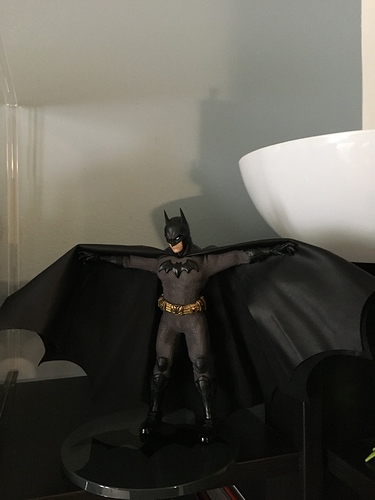 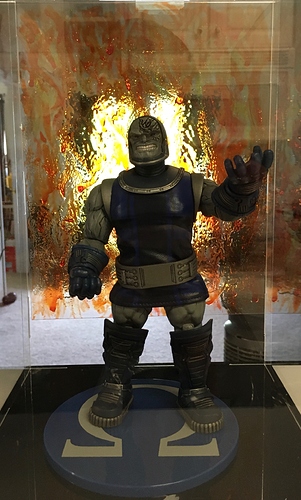 @SWhite Nice. My biggest worry with Mezco figures is posing them. For my fat fingers, manipulating those joints under the cloth costumes is a bit challenging. Feels like I’m gonna ruin the costume. I never do; but always feels like I’m about to. Still my favorite figures at that scale though.

I like how you’re getting creative with these little guys

. Instead of a cityscape, maybe some fire pits for Darkseid?

Still haven’t pulled the trigger on modern Wondy and Supreme Knight. Feels like I’m nearing a saturation point with collecting, both generally speaking and specifically with 6"-7" action figures. I say that… until the next pre-order. It’s a cycle!

Thanks. I don’t take advantage of posing because I know some costumes end up folding and creasing if left static. I haven’t heard that directly about Mezco though.
I did add a haphazard semicircle fire pit at the bottom and like the idea. The “problem” is that the sheet is shorter than the case so it’s either gap at the top, gap at the bottom, or secondary piece. It’s also shorter now because I trimmed part to try a light source that the sheet could slot into but it didn’t do much of anything.
I really need to stop with the Mezco. Besides preorders, I am claiming to myself I will only get a Superman whenever they do another but there are plenty of characters that would break me (Dr Fate, new Batman Beyond spring to mind). Thank god I don’t care much about Marvel. 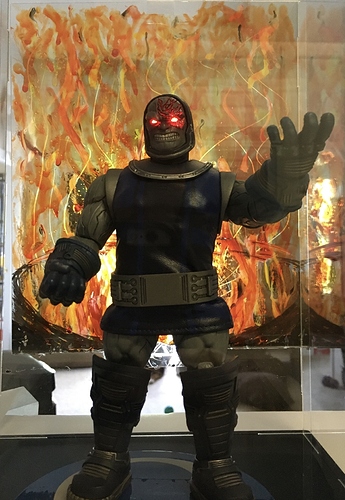 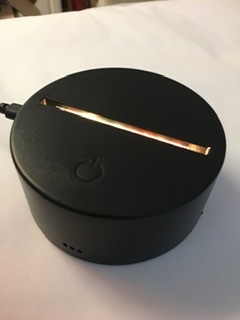