I wanted to write about my favorite Superman story of all-time and why it’s my favorite. The story is called “Clark Kent’s Incredible Delusion,” and it can be found in Superman Vol.1 #174 from January of 1965 (20 years before I was born). 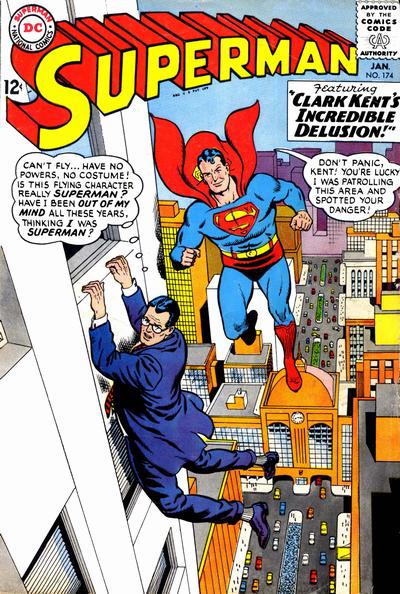 Superman 174 Cover400×594 79 KB
Unfortunately, this issue cannot be found on DC Universe, but I’ve scanned some key images for you.

It begins with Clark Kent going into The Daily Planet like it’s any other day. Then this dude rolls into Clark’s office, introduces himself as Adam Newman, and tells Kent that he has a story for him.

Superman 174 21198×543 288 KB
Obviously, this must be some kind of hoax. Clark Kent is Superman. We all know this. Yet, when Clark tries to track Adam Newman using his telescopic and x-ray vision, they don’t work. And…

Superman 174 31210×535 296 KB
Clark has no idea why he’s lost his powers. He knows it’s not Red Kryptonite because there’s a distinct tingling feeling he experiences when he is exposed to it. He knows who he is, but he’s starting to panic. He needs proof that he really is Superman.

Clark rushes to his apartment, but his Superman robots are not where he left them. Supergirl is away on a space mission so he can’t call her… But there’s Batman! Batman has known he’s Superman ever since Superman Vol. 1 #76. He’ll be able to confirm it! 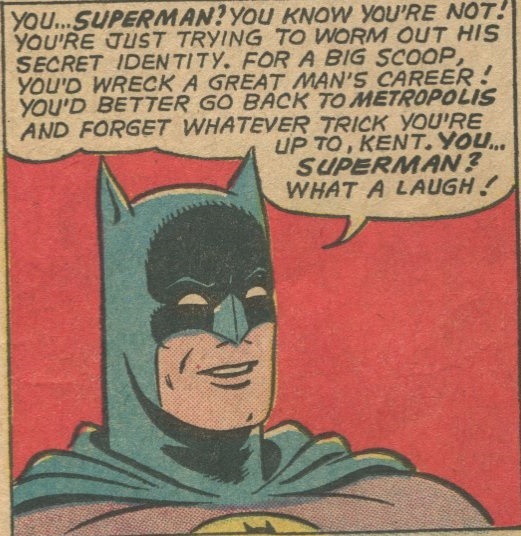 Insult to injury, the Adam Newman “Superman” prevents Clark’s plane from crashing as he returns from Gotham City. At the end of his rope, Clark accuses this Superman of being an impostor both loudly and publicly. That’s when the cops show up…

The police chief tells Kent that they won’t have him held in a psychiatric ward if he agrees to willingly see a therapist. So, Clark Kent goes to share his feelings, and, of course, they end up talking about Clark’s childhood.

Superman 174 61192×531 292 KB
The breaking point comes after he leaves the therapist’s office and watches as Adam Newman flies by with Krypto at his side. Et tu, Krypto? Clark goes home to have a depression nap.

However… disaster strikes at the new Metropolis nuclear power station. When the Adam Newman “Superman” attempts to fix it:

Superman 174 71193×538 291 KB
Adam flies to Clark’s apartment and tells him it was all a ruse. Adam tells Clark his powers will return if he simply takes off his shoes. Clark does, his powers return, and, faster than a speeding bullet, he speeds off to fix the power station and save the city. He does so easily.

When Superman returns to his apartment, Adam Newman explains what happened. You see, Adam is really an android that Superman created a few weeks prior. Superman thought his secret identity would be better protected with a more lifelike double than his Superman robots. So Superman created Android-I. Unfortunately, Android-I didn’t work out as expected:

Superman 174 81201×531 302 KB
Anywho, a freak event occurred that made Superman believe Android-I had been destroyed. The event actually just made the android smarter. Android-I vowed revenge for being rejected. He practiced to improve his coordination then set about to work at a complicated, detailed plot to replace Superman. This plot involved putting red sun transistor-receivers in Clark Kent’s shoes to deprive Superman of his powers.

Adam is telling this story to Superman with his final breaths. He is soon to die. Superman sees that his android managed to do the right thing in the end by putting the safety of Metropolis over his plot for vengeance. Because of this, Superman makes sure his android dies with a fitting tribute: 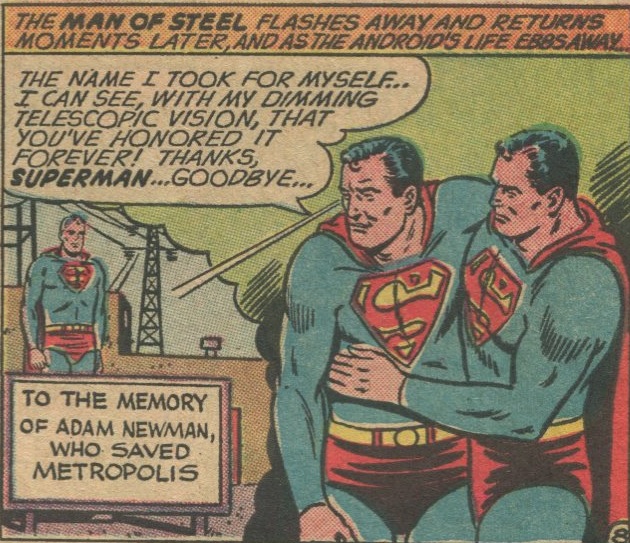 I’ve always liked the Clark Kent interpretation that he is just an act at being mild-mannered. I like the idea that Clark’s friends and co-workers see him as timid, weak, and ordinary. In reality, he’s Superman- Earth’s greatest champion, and he knows that. Yet, no one else sees it.

Don’t we all get that feeling sometimes? That the people closest to us don’t really see us or know us for who we really are.

And… sometimes people will try to tell you who you are. Much like when the therapist tells Clark that he’s a shy introvert with an inferiority complex OR when Superman tells Android-I that he’s a reject at being Superman’s double.

Yet, both Clark and Adam prove those assessments to be absolute garbage. You know who you truly are and you are the only person who gets to decide that.

“The name I took for myself…”

That quote will stay with me.

That’s why “Clark Kent’s Incredible Delusion” is my favorite Superman story. It helps get me through the hard times when I’m doubting myself or others have made me doubt myself. I hope it’s helped you too…

Thanks! And thanks for reading!