Look, I know I should pay more attention in class, but I focus better on a computer and this class is 30% material I did just last semester anyway, so… instead of notes, I have Nightwing and the Riddler. 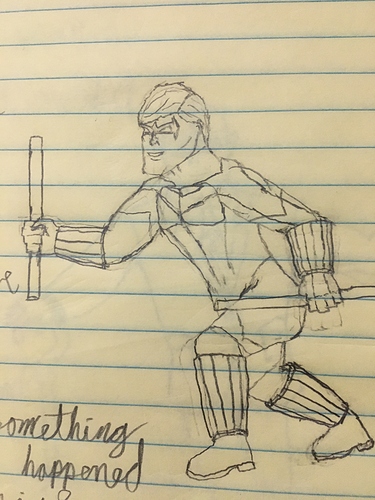 Nightwing Sketch3024×4032 2.22 MB
Second attempt at drawing Dick. Something’s off about the proportions and the perspective on his head is all weird. 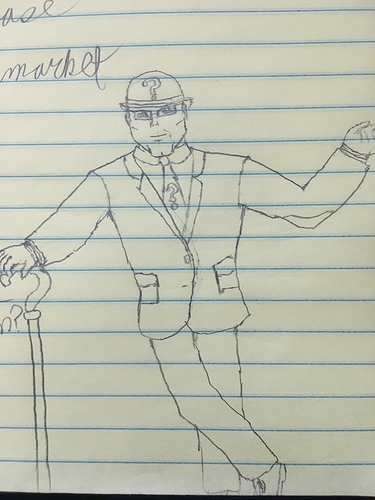 Yeaaaaaah, Nightwing!! I don’t see him get enough love in the fan creations section, so this made me super happy

… but at least as a pretense in class, shouldn’t you be sketching Dent?

I love those pictures. I have so many of my old pics from back when I was younger and SO many of them are on lined notebook paper like yours.

Thanks for sharing yours!

I worked fast today and took better notes than usual. 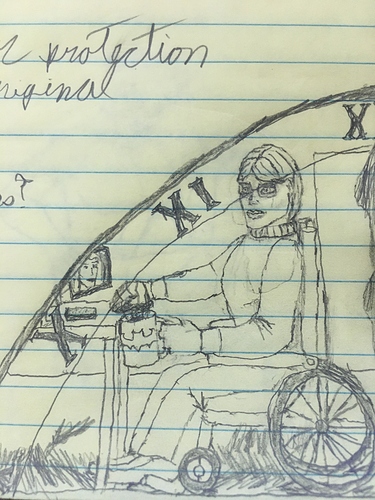 Oracle Sketch3024×4032 2.36 MB
Was playing around with a little more complex shading on this one. The numbers on the clock are pretty rough, and that computer is tiny. And that’s supposed to be a two-monitor setup but one is running off the edge. 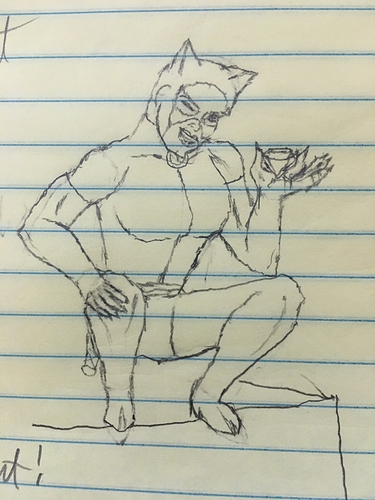 Catwoman Sketch3024×4032 2.11 MB
This is the second time I’ve drawn Catwoman and the second time she’s come out much better than usual for me. Though that said, I was having a hard time making it look like she was actually eyeing the diamond and not just winking, but in trying to fix it I ended up just turning the open eye into an indistinct blob.
10 Likes
CynicalPink February 4, 2020, 11:51pm #5

Very cool. I especially like the composition on the Oracle piece. The clock is a nice touch (-w- and yay dick).

And I don’t think Selina’s eye is blobby! Soon as I opened at a bigger size, I could make it out just fine. Looks way better than stuff that’s out there. I could do a whole thread on hilariously awkward art from real publications. I had the best icon of Tim looking essentially like

for the longest time on dA ages ago. 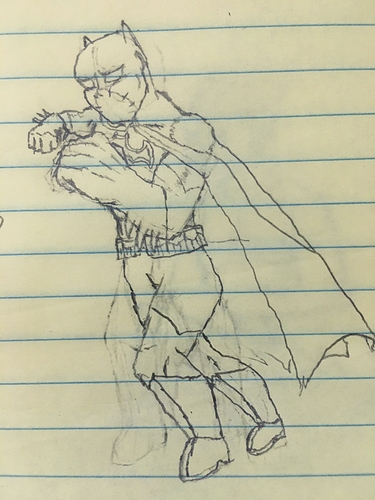 Batgirl Sketch3024×4032 2.12 MB
I was doing so well until I tried to switch the positioning of the legs, and then realized they made more sense the way I had them to begin with.

Anyway, I’d say I feel bad for whoever she’s punching, but… 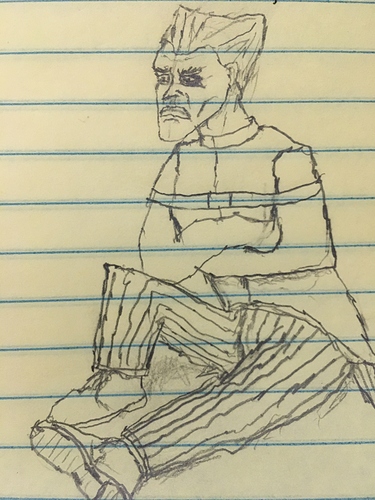 Also I started drawing this and realized I had no idea what a straitjacket looks like. I actually got closer than I expected, though.

They look pretty good. Also, it is my personally philosophy that as long as I know the material and don’t get Fs, It doesn’t matter if I pay attention to class all hour. Seriously, most of the comics I read get read in either Math or Science class. Once Mr. Harvey caught me reading the Flash in class, and so I told him I was applying properties of sciencee to Sci-Fi characters to se what is realistic and what isn’t. he just stared at me for a minue, then walked away.

Well, I’m a grad student (law school, to be specific). So the professors don’t care as much what I’m doing, but it’ll hurt on the final if I don’t know the material.

Dang man. I was bored in art class and sketched a Batman but it looks like a seven year old drew it 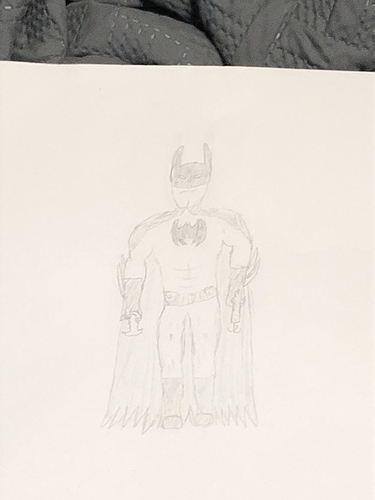 See what I mean

I know there was a time not that long ago when my art looked a lot worse than that. It’s just a practice thing. I mean, getting really good is hard work, but what I do is just a matter of finding one little detail to improve at a time.

Oh. Yeah, I don’t know how to BS it in college. (I’m a HS freshman). I bet it probably is harder to pull procrastination off for you though. Well, hope you ace the final. Also, are going criminal or civil law? If civil, are you going more in the domestic side of things, or business side? (I know the terms are wrong, but I know if I try to use the right ones it’ll come out wrong)

Hoping to go into business, ideally copyright contracts. In fact, my Intellectual Property professor is the one unwittingly helping me with these drawings by not allowing laptops in class.

Don’t want to seem rude, but piece of advice: when drawing bat-family characters, if you mess up, just make it a different character. Like when I make Jason too short, he is now Damian. When I make Barbara without hair, she is now Cassie. I think what I would do here is make This a Batman. You just made the musculature a little too masculine. Don’t worry though. Girls are always harder to draw. IDK why.

huh. I used to think that criminal sounded fun and exciting, until I sat in on my uncle’s session once. (he was the attorney, not the defendant.) Turns out, they tend to be a really suspenseful roast, with a bunch of weird objections.

With Cass, my thinking was that given what a close-combat juggernaut she is, she’d be more muscular than she’s usually drawn. I was kind of shooting for more of a lean-but-toned look and made her a bit too bulky, but this was quasi-intentional. I had the same issue with Dick (my first attempt, which I didn’t post here, looked a lot more like how I draw Batman but with no cape and a different head, so I had to slim him down), so I might give her another attempt. I was also doing kind of a tough pose with the perspective on the fist.

Well, I think perspective was aced. And as far as bulk, you pulled it off. I just meant that there was a lack of femininity (gosh, I hate that word) makes it hard to tell it is a girl. I understand though. My early Powergirl and WW Drawings always looked like scary, cross-dressing guys on steroids. It is always harder to draw women. Again, idk why.

I think I have a problem. I almost got four done this time. Though to be fair, one was surprisingly easy, one sucks even by my standards, and one is just unfinished. 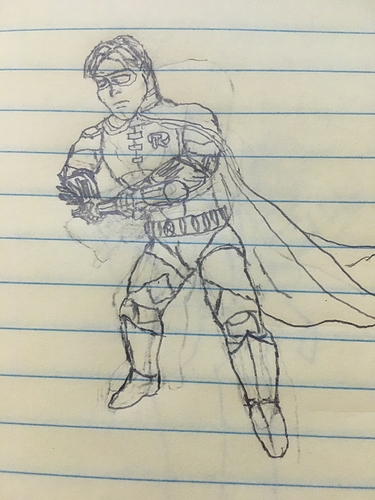 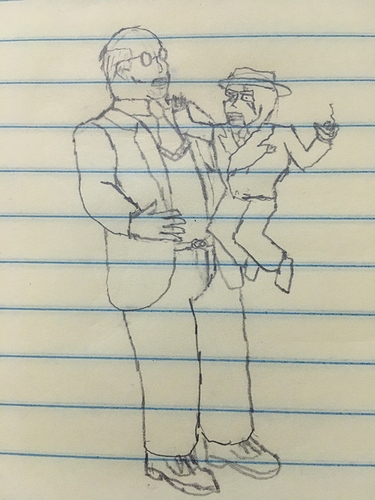 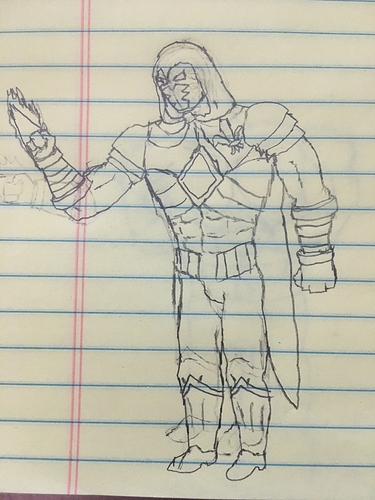 Lousy Azrael Sketch3024×4032 1.9 MB
Proportions are weird, and I didn’t really think through his costume so I couldn’t do as much detail work. Also, those feet. 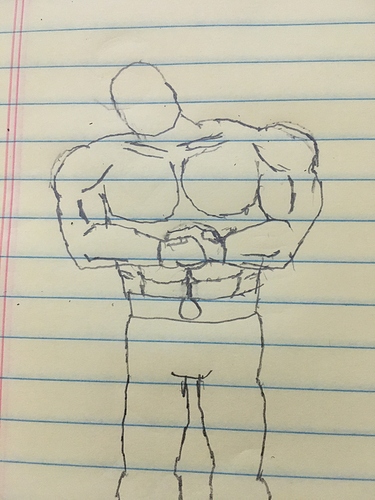 Unfinished Bane Sketch3024×4032 2.15 MB
Head and hands are too small, but this one was actually coming out alright.
7 Likes
next page →