Monthly Sweepstakes – Birds of Prey: And the Emancipation of One Harley Quinn 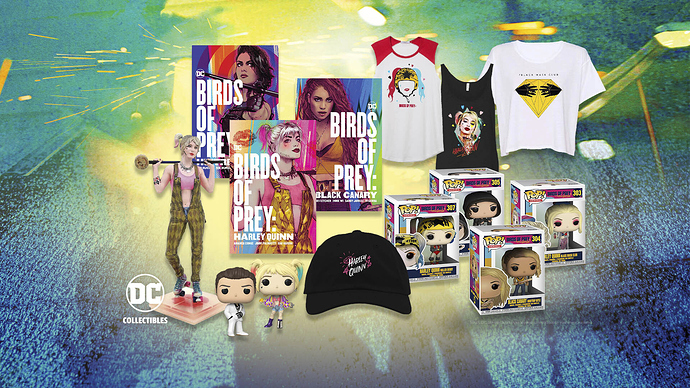 Have you met the Birds of Prey? They’re a fighting force of four fearsome females who combat criminals in Gotham and now you can catch the adventures of Harley Quinn, Black Canary, Huntress, and Renee Montoya on the big screen in Birds of Prey: And the Fantabulous Emancipation of One Harley Quinn!

With a movie this big and this extra, it only makes sense that we’d have a sweepstakes that is just fantabulous as Harley Quinn herself. With this Harley-sized prize package you can dress like a Bird of Prey with an exclusive Black Mask Club Crop Top, a Mayhem Women’s Exclusive Tank Top, and an exclusive Breaking Hearts & Faces Tank. Plus, you can deck out your lair with not one, not two or not even three, but SIX Birds of Prey exclusive Funko figures. And if you’re more of reader than a fighter, you can get to know the members of the Birds of Prey with three comic books featuring Harley Quinn, Huntress, and Black Canary. It’s a sweepstakes so epic, it’s like Harley herself looted the DC Universe shop just for you!

Enter this giveaway for a chance to win now through February 29th!