🎶 Mixtape Monday: What Song Would You Play to Rally COIE's Heroes? 🎶

Our Birds of Prey playlist is complete, and, we’re excited to share the final song list below! Take a looksee at the goodies, dear friends:

This Week’s Theme:
What Song Would You Play to Rally COIE’s Heroes?

Last time we delved into COIE, we did so from the perspective of the fallen, but now, in anticipation of the two-part finale, we’d like to dedicate this week’s songs to those who live on to fight another day on behalf of the DC Universe and all it entails!

One of our lovely Mixtape Mixers chose “We Will Rock You” before to signify that the fight’s not over, and in similar spirit, we’re asking: what song would you choose to rally our heroes together for what’s to come during these final hours of COIE? Let us know below, and feel free to choose something focusing on a particular episode, or group of heroes (if you like the dynamics of a specific one), you want to see most.

While lyrics must abide to Forum Guidelines, the songs can be anything, of any genre, as long as it meets each week’s theme!

Every week, we’ll post the title of our latest Mixtape, and you post a track of your choice in the comments below! We’ll follow up next Mixtape Monday with the full list of tunes collected from the week before. And if our “What’s the Last Song You Heard?” thread is any indication, you all have superb taste in tunes!

Hmmm, for this week’s theme, this was one of the first songs to come to mind (I really like that version of it), but when it all boils down, I think I like The White Stripes’ “Seven Nation Army” for this. It’s one of my go to’s for when I need a good pick-me-up (I alternate between the two, usually).

This is another of my favorite songs of all time and it came to mind first when I thought about the beginning of a powerful and meaningful battle: Wonderwall by Oasis.

Theme music from Rocky! Time for our heroes to go back in action and save the day!

Another song that came to my mind that would fit, Clint Black, ‘No time to kill’ if you think about it, our heroes really have no time to kill!

I still haven’t watched crisis because I’m still seasons behind.

I pick this song because it’s very upbeat and together feeling.

We Will Fall Together by Streetlight Manifesto

Modern English- I’ll stop the world and melt with you. For the moment Firestorm makes the ultimate sacrifice.

After watching the final 2 episodes tonight, I think this would do it! It’s called,‘The Touch’ by Stan Bush. For Oliver!

Sure it’s from another hero property but one of the episodes is a Legends episode, so it’s ok.

BIG Kung Fury fan. I considered that one too.

Everybody wants to fight back after listening to the Rocky theme.

I got 1 more song, here’s from Les Misérables ‘Do you hear the people sing?’ Now that’s a good war cry against Anti-Monitor!

@KeyFamily - I can understand why that’d be a favorite. Wonderwall’s such a good one to sit back and get into the zone to, and brings back such good memories from the past (Vroom and I were talking about some of the old teen movies a few MTM threads back, and that’s what comes to mind when I hear it - such good days!). This would be a great background song for at least one scene, definitely!

@Reaganfan78 - Ahh, yes! Gonna address your first three songs on here and add a new post when I finish up to get your last one. But for now… if a good Rocky theme doesn’t pump you up, what in the world will? Thank you for that… oddly enough, outside of thinking about the movie, itself, the first thing I see in my head when I hear it is always the training scene from that old Nintendo game, “Punch-Out.”

That said, I like what you did in mixing up genres with your choices. I wouldn’t have thought of Country, but now I’m face-palming for not thinking of it (especially with all of the Westerns I’ve watched that have had some superb background soundtracks of similar “pep talk” quality). Hadn’t heard “No Time to Kill” before, but that’s a song worth listening to again. I love both it, and your rationale! Transformers, too, though? You’re really getting me with the nostalgia today!

@seitan - No worries, there, I’m seasons behind on… well, everything, too, so I understand.

You’ve gotta let us know when you end up watching it, though - would love to hear how you like it! As for the song, it won me over with the video, as it was, but the song’s so good! It gives me Sum 41/Billy Talent vibes, but has its own special flavor that makes it all its own. I especially like how the lyrics you quoted connect. Awesome choice!

@TornadoSoup - Oh my, thank you for the two-for-one!

Bon Jovi automatically gets two thumbs up, and as for “Hell No!” hate or not for others, put me firmly on the side of liking that song.

You all really know how to make me feel like I’ve been missing out on some exquisite bands, and what I like about your choices this week, is that I can imagine specific characters rocking out to each of the songs as they prepare for battles, which makes it all the better this week. Fabulous choices!

@dago-mage - Ooh, yes, I can see that! That’s not one that would’ve come to mind for me upon first thought, but when you listen to it all the way through, it becomes clear why you’d choose such a song. Along with it just being a great song on its own, the way you apply it makes the difference. It’s also been a long time since I’ve heard that, so giving me the refresher with a chance to hear it again is another reason to thank you for sharing it.

@TravisMorgan - I can definitely get behind a choice like that! What I love is that it’s the type of song that, even if you don’t know the lyrics, is just a really good rallying call song on its own, and it has the ability to put you in that mental space without any prep needed. And if one did do the prep to find out about the song, its lyrics, and background, you have the added cool factor of it to go along with it, so it’s win/win.

@Coville - I concur with @KeyFamily! On top of the fact that the lyrics for that song are a perfect match for superheroes getting ready for battle, since games like the one shown in the vid were some of my favs growing up, I can’t help but like your choice all the more.

“The hero stands alone, When all is said and done, the enemies have fallen, one by one” - lovely! Lyrics like that make me go to the cheesy zone of being so proud of all of you, and how you take each MTM theme per week, go “challenge accepted!” and then surpass any and all expectations!

@ralphsix - Right? When @Reaganfan78, posted it, I ended up thinking of Gary Glitter’s “Rock and Roll (Part 2),” too. It’s no wonder they play these songs at sports events. After going through this thead, I felt like training for… something, be it marathon, or saving the world, too!

@Reaganfan78 - Decided to just add this to the main post instead

To your last song, I don’t know how you manage to couple together our MTM themes with songs from movies such as Les Miserables, and The Phantom of the Opera like you do, but I really enjoy it when you do! That’s such an inspirational one to pull from! Thank you for another unexpected addition!

Oh it comes to me when I think about the theme.

@MissInkBlot Yes, I considered both the propulsive beat and lyrics context.

@Reaganfan78 - ahh, your mind works faster than mine does, then!

But with the range of genres and time periods you listen to, it’s no wonder! Looking forward to your addition this week!

@TravisMorgan - Then, it’s a win/win, indeed!

I’m glad I’m not the only one who checks out the background info when it’s officially available. Knowing what the artists were thinking of when they created each piece adds such a nice layer of depth when interpreting lyrics. 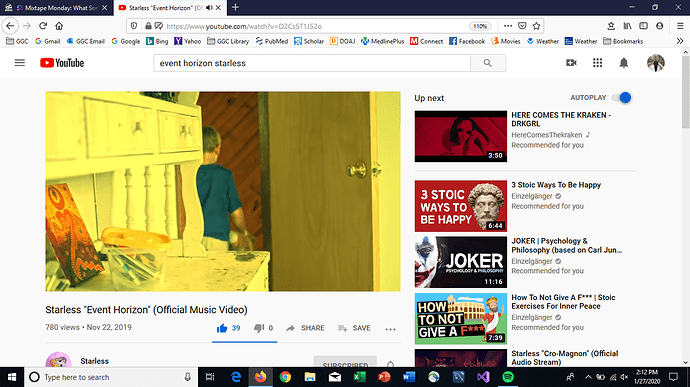 Screenshot (44)1366×768 493 KB
Event Horizon by Starless off their 2019 EP: I believe this song encompasses the full-scale of the crisis- as far as the heroes accepting their fate and overcoming their fears to fight the threat that comes, some of the heroes hubris led to their demise. the anti-monitor’s emergence and the promise of an end that can enact change.
1 Like
next page →