🎶 Mixtape Monday: What Song Hypes You Up for Harley Quinn? 🎶

@seitan, why thank you! It’s one of the first things that popped into mind that I can imagine her singing.

Ooh, but I quite like your suggestion. That music video’s crazy on its own (am I the only one a little creeped out by puppets?

), but the lyrics are just as great!

@ralphsix, haven’t heard that in a long time, but happy to take a listen to it again! So, what is your answer to the question the lyrics ask with, “does that make me crazy?” If the HQ group asked me, I’d undoubtedly deliver a deadpan “why, yes, yes it does.” o.o lol

@manifest, wow, that’s an intriguing perspective to look at the theme from. Have always liked “Bad Romance” as it was, but the added layer of what you applied is a great addition. Very out of the box.

@Vroom, ahh, Limp Bizkit’s a welcome mention, too, I agree! It’s strange how that song seems to do double duty, at least for me, since it tended to be used for both good and bad days, so I’m wondering if she’d eventually come to use it for both, too. Was it just a bad day song for you? Can definitely see those two becoming friends, as well, though.

and thank you for helping @Jay_Kay!

@Jay_Kay, you know, that’s one of those songs I remembered hearing, but never knew the name/artist for, so I thank you for sharing that! I played it aloud and it had heads bobbing in the house, so it’s definitely a winner! Great choice!

Happy listening to everyone until then!

So, what is your answer to the question the lyrics ask with, “does that make me crazy?

If you have to ask the question, then you probably already know the answer!

@MissInkBlot Break Stuff wasn’t a bad day song for me when I chose it. It just struck me as something Harl would cue up when she’s in the mood to, well, break stuff.

@Coville - Now, that’s a song I’ve never heard before, but wow, do I love that beat. That music video, though… what in the world! lol If I’m honest, I feel more confused after it than I did before… but I like when that happens, especially on an HQ-inspired week, so this is good, lol.

@Anonymousbluebeetle - That’s lovely! And quite unexpected in how well it fits. I have to start listening to more music like that. I’ve slowly come across similar tunes and they’re always so good! Was that something that automatically popped into mind for you? (as in, do you listen to lots of music like that?)

@Reaganfan78 - You’re most welcome! Your pick this week’s just as superb as last week’s, as well!

It’s been a while since I’ve listened to Sheryl Crow, and for some reason never knew she sang that song. I completely agree with you, though, she does give off a very HQ vibe - very cool how it applies so well to both this week’s theme, and 007! Who knew?

@Applejack - I love the Alice in Wonderland tie-in with yours - the lyrics fit her and the overall feel of the show’s trailer so well, along with that being a delightfully creepy video (that poor donut at the end, though! lol). “So what if I’m crazy? The best people are…” stands out as perfect!

@Nogoodchuck - That’s awesome! It’s does a great job in pumping a person up, and reminds me a little of “Killing in the Name Of,” oddly enough. Same sort of tempo, maybe. That said, your song would’ve been great in the actual HQ trailer. Really well suited, and goes hand in hand with the “Freedom!” theme.

@maggie11385.65674 - The back beat for that’s addicting, and it definitely fits HQ well, from the title to the lyrics. I can see why you chose it, and why others have also dedicated it to her in their videos. To say it has a powerful chorus is understating it!

@Dcgoddessofmayhem - I agree, that definitely does fit to a T. I’m always interested in songs that were specifically created with characters in mind, just to see what the artists come up with with such a narrowed line of inspiration in mind. Thank you for sharing it, it was really well done!

@ralphsix -True enough. I’ve asked it many a time, and the conclusion always confirms it.

@MissInkBlot It’s ironic (to quote Alanis Morrissette, “don’t ya think?”) that I’d highlight Britney Spears, as I generally don’t like her music. However, I was in high school when she hit big, so her music kind of stuck with me.

I’ll admit that I liked “You Drive Me Crazy” more than other fellers my age around the time it was popular, due to the movie “Drive Me Crazy”, which starred “Dee-Dee from Batman Beyond: Return of the Joker” herself, Melissa Join Hart. “Clarissa” did indeed “Explain It All”.

The tune below is more my speed, and something that I feel could fit Harley as well as Britney’s poppy, bouncy, bubblegum tunes do.

@Anonymousbluebeetle - Nice! Such are my playlist goals, as well, and yours is an enviable time range of songs to have.

@Vroom - Can completely understand why those would stick out for you, especially with a movie like that. They seemed to be particularly good at getting songs stuck in our head (and just like that, “Kiss Me” by Sixpence None The Richer pops into my head as a perfect example from the She’s All That movie).

Would’ve never thought to associate “Smooth Criminal,” but I can definitely see that, now. Hmm… also, Alanis and Alien Ant Farm are going on the listen list tonight, now. Thank you for mentioning them! Honestly, these threads are becoming worse than YT related video lists for me, lol.

@MissInkBlot Funny you should mention “Kiss Me”, as it’s also in Not Another Teen Movie, which is a brilliant spoof of teen movies, especially She’s All That.

Fun Fact: @DCDaily’s Samm Levine is in Not Another Teen Movie, as are many other folks who went on to assorted DC productions.

See, facts like that are why I love movies like that so much. I had no idea! I might have to play a DC-based game of “Six degrees of separation” on that, tonight. As for “Not Another Teen Movie,” I always liked how the spoof movies like that were just as good, if not better, than those they were based on (at least for me, since I’m into silly movies like that).

Not Another Teen Movie is also one of the few spoof movies with “movie” in it’s title that doesn’t suck.

Date Movie, Disaster Movie, Superhero Movie and the rest are complete crap and just missed the whole point of satire (to say nothing of being funny, which they weren’t), but Not Another Teen Movie absolutely nailed it!

Kentucky Friend Movie is another spoof with “movie” in its title that is quite hilarious. It features many of the fine talents that went onto Airplane!, The Naked Gun, Hot Shots!, etc. 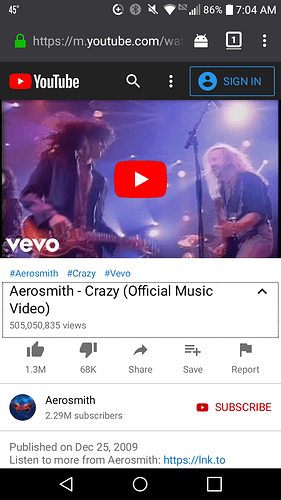 Aerosmith- crazy- joker to harley. How she feels​

@Vroom - There are too many movies on that list that I haven’t seen, actually. I kind of like watching bad movies as much as good ones, so that’s going to have to change lol Thank you for sharing those!

@Nok - Hey Nok, welcome to the party, and thank you for the new song (I could never turn down Aerosmith