Welcome, and hello, everyone!

With your help, last week’s list of tunes had us feeling the feels, from a bit morose and introspective, all the way to terrific, and then some. Thank you, DC Family, for treating us to such an exquisite playlist!

Although our Black History Month MTM Spotlight is winding down, our celebration’s just as turbo-charged as it’s always been as we end the month with a week devoted to the electrifying Static Shock!

After suddenly finding himself equipped with the ability to control, generate, and absorb electricity, Static’s journey is one that’s both profound and inspiring. Having overcome a number of obstacles to eventually reclaim his life’s purpose, he uses his powers to protect his family, friends, and neighborhood with a style and finesse that’s magnetic, bold, and truly all his own!

What songs do you think adequately represent so influential a superhero?

Let us know below!

Love Static as much as we do? Don’t forget to enter our sweepstakes for the chance to win!

Click below for a quick overview of Static Shock’s background:

While lyrics must abide to Forum Guidelines, the songs can be anything, of any genre, as long as it meets each week’s theme!

Every week, we’ll post the title of our latest Mixtape, and you post a track of your choice in the comments below! We’ll follow up next Mixtape Monday with the full list of tunes collected from the week before. And if our “What’s the Last Song You Heard?” thread is any indication, you all have superb taste in tunes!

Going with two songs this week. For the first, I think Imagine Dragon’s “Radioactive” applies to the situation in Static’s past related to the Dark Side Club (and yes, I do listen to a lot of ID lol).

But when choosing a song I think he’d like to listen to in general, I’m going with Fall Out Boy’s, “My Songs Know What You Did In The Dark (Light Em Up)”

I’m making it easy for myself this week:

: One of the pioneers in electronic music, Jarre was in 1981 the first western pop artist to be allowed to play in China after the cultural revolution.

ooh baby. I loved the series. Lets charge this playlist up!!
Toxicity-System of a Down
One, toxin gave him powers. Two, he is a black youth fighting crime in a big city. He’s had his fair share.

Black- Pearl Jam.
That whole Terror Titans thing must have been, well, terrifying. World ending, Darkseid impending. His world was drenched in a dark blackness.

Monster-Starset.
The pressure he a teen feels, working for a prestigous tech company, STARLabs, being a superhero and being a teen.

Clocks-Coldplay
The pain he felt after Clock King (i know) forced him to battle and hurt his friend, Rose.

To possibly be continued…

Deep Purple: Space Truckin’.
The Animals: We Gotta Get Outta This Place.- in relation to his desire to escape the meta facility in YJ & giving Daisy Watkins a better life.

This month was hard

I think because personally I’m not that interested in Black Lightning, Mister Terrific, and whoever else it was. But Static Shock is the one I like. I loved watching his animated series when I was tiny.

I was thinking of paying tribute to the man who help created Static Shock and wrote many great story, Dwayne McDuffie. 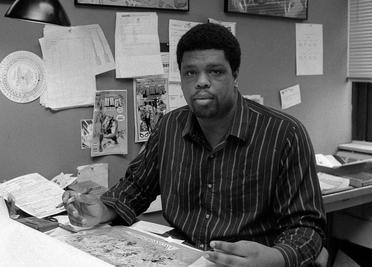 And as Tribute here’s Frank Sinatra ‘My Way’ Dwayne did it his way.

This one is tough because most of the songs I was going to pick didn’t fit the forum guidelines once I looked at the lyrics. HOWEVER Here is a clean version of Planetary [GO!] by My Chemical Romance I found. I can see this being on his playlist!

@Coville - I love it! Well, both the song, and the trivia (I’m such a sucker for unexpected tidbits like that, lol. They always make me take a second, and third look at the song, the artist, and how the two fit together in a way I hadn’t seen before knowing the new info)! For me, it’s surreal and outlandish in a good way, because of how amazingly well it translates a the concept of coursing electricity into sound. Have you ever seen videos on cymatics? That’s what listening to that makes me think of - would love to see the effect a song like that has on matter.

@anon52107441 - I really do adore how your knowledge of both the character’s story, and your thorough understanding of the songs you listen to regularly, manifest in so applicable a list of tunes, and this week’s no different - you manage to go into the details I miss. With the TTGO theme, we hit the good area of nostalgia, and with Coldplay, got me right in the feels.

Would never have thought to look at his life from the perspective of what influence toxicity plays, let alone from the point of view of anxiety caused by his job, but both really deepen the discussion one can have about his character. Add to that how your list of songs makes for an excellent choice in SOAD, and your rounding out everything with Pearl Jam and Starset (the last of which I’d never heard before, so I love how they remind me a little of band called Submersed), and it’s such a well-rounded list of songs! Thank you!

@capo-mage - What an interesting combination! The sound of the two together, especially when played one after the other, is intriguing. A song like “We Gotta Get Outta This Place” settles well in the mind as a choice for that part of his background, I agree. I can only imagine how long a list of songs one would need to cope with such a situation, but that’s one I’d certainly put on the list (I love that it’s not a 100% dreary song despite the topic). I’m curious what made you choose “Space Truckin’”?

@seitan - Aww, I’m sorry you had a hard time this month, but am delighted you were able to end the month on such a high note, by comparison!

I agree with going with his theme song, too! Short, sweet, and accompanying some great memories of the past, it fits well with what’s become my “woosah” mantra as of late: if it ain’t broke, don’t fix it!

Thank you for sharing!

@Penguinfan78 - Ooh, that song’s one of the earliest ones I learned to play on piano, so it has a special place in my heart, too, and I’m happy to have seen you choose it. Thank you for that, and for reminding me that I need to add more choices to our Black History Month thread celebrating creators like Dwayne. That was a beautiful tribute!

@thrakaboom - Yay for the clean version!

I listen to older MCR songs often, but took a break from listening to new songs, so I missed out on that one. It’s a happy surprise to listen to, though! I can see that being on Static’s playlist, as well, and certainly being something that could be used during an episode or two of the show. Loving how it manages to give off something of a static electricity feeling throughout it, too. Superb choice!

@MissInkBlot I was just thinking of him traveling on his Dakota City manhole cover thru the air. Plus I’d just watched YJ season 3 & JLU where he was in space in YJ (traveling/trucking in space) & the episode in JLU where they go the future & meet Terry McGinnis & the future JL as their future selves. So Space Truckin’ thru space & the future on his manhole cover.

Cymatics are a treat to watch. I haven’t seen any in a long time. You revived my interest and made me look into it again.

While I don’t know if Jarre has worked much with the medium of sound turning to something you can see, he is very famous for the opposite. He is famous for playing the laser harp where the interruption of the visual turns to sound.

He plays the laser harp at about 4 minutes in on this video but I really recommend the start. It’s such a treat.
(Water for life concert in the Sahara Desert, Morocco)

Hey, give me a break. I could remeber, and I felt like G would’ve been cheating.
PS: I’m back, baby!!!

Alright, but just this once

@capo-mage - It’s great being able to hear about the convergence of all that you were thinking about when deciding what songs to share - I would’ve never known about just how applicable the “space” portion of the song’s title was without it. I agree, that’s a perfect choice for him, both on earth, and off it!

Now it has me wondering what I could use as a song to apply for the time travel aspect (and wanting to see those episodes now, lol). Thank you for explaining!

@CrazyQuilt - Thank you for helping out with that!

@Coville - So glad to hear there’s someone else who looks up those videos, too! In case you haven’t seen it, this one’s a recent fav I’ve added to my collection. I hope you like it, and have a great time seeing what new has been posted on the topic! As for that video, thank you! Wow, that performance was magnificent, and well worth the full 10 minutes spent watching, so I’m glad I didn’t skip ahead and miss out on anything. Oh, to be in Morocco, and see that in person - what an experience!