An alien confrontation tests Icon and Rocket’s limits, while assistance from a mysterious newcomer puts Rocket’s skepticism on full display.

This issue takes place on Paris Island, which you’ll recognize from the original Milestone days as the home base of the Blood Syndicate, and an area where the police rarely travel to.

The art in this series is phenomenal, and this is easily the most action packed of the Milestone Returns books so far. Where it falls flat for me is the dialogue.

If the original milestone books felt like they were written specifically for me (even at 30), this new Icon & Rocket series feels like it’s aimed more toward today’s kids. But badly.

It’s like my father trying to speak to my daughter in today’s slang. At one point, Rocket launched the Alien 50 yards into the sky while yelling “YEET!”

Lol I just need Reggie Hudlin to chill on the slang. It feels gimmicky, almost to the point of caricature.

What did you guys think of this issue? It’s available on DCUI now if you want to read it. 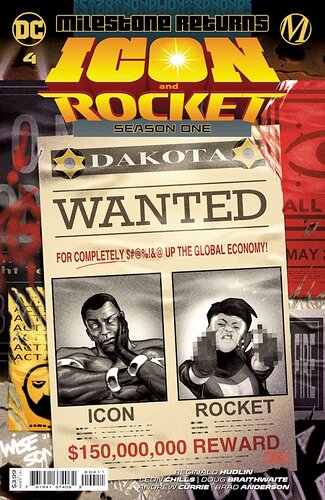 First, welcome back to DCUI!

I haven’t read this issue, yet. I have been reading the series and I can agree on the dialog. Overall, I have been giving it a pass as I am sure this is not aimed at a 40 year old, nor do I have children to keep up with the slang.

I am enjoying the story being told and the artwork has been great as well. I haven’t read the original comics so I am not sure how the new ones compare.

I will be back once I read this issue with my thoughts.

P.S. I enjoy your YouTube channel and is one the 3 that I watch on a consistent basis, when I find the time. (Omnidog and Casually Comics are the other 2)

Thanks man! With everything going on, I always forget this community section is still a thing. I’m so glad you’re enjoying the channel! I’ve been hard at work on some really cool things that I’ll be launching later this month.