It’s all been fun and games until now… But as we enter the Semi Finals of Meta Madhouse, it’s time to get SERIOUS!

The upsets, the victories, the popularity contests and the reasonable decisions- they’ve all been part of an emotional roller coaster as only DC can do it.

After four excruciating weeks, we now present to you our finalists:

These champions will get a chance to prove their mettle by battling for THREE STRAIGHT DAYS. And if that’s not enough, the last ones standing will be forced to duke it out all weekend long. Will they save their strength for the end? Or will they take out their opponents as quickly as possible with one powerful burst?

Tell us all your theories in the comments below!

To reiterate. My picks are Flash and Doctor Fate.

Those stipulations bury The Flash and Nightwing. 3 Straight days doesn’t bode well for the two combatants that need to eat and sleep (though Nightwing has proven he can stay up that long, he couldn’t do it without eating). Either way, Darkseid and Flash is the only fight that would take more than a few minutes. Dr. Fate would trap Nightwing in a pocket dimension, blast him out of his boots, or just turn wrap him up in some kind of magical energy the second the fight starts. Or, you know, he just flies out of reach, puts a force field around himself, and keeps firing until Nightwing tires himself out, seeing as Dr. Fate has near limitless energy.

Darkseid would Omega Beam Flash after a few minutes of chasing him. Flash may be fast, but Darkseid isn’t some snail. Plus he’s got 2 beams jutting about in every which way, making it much harder for Flash to react. If that’s not a good enough explanation; Darkseid just stands there and takes all the punches Flash throws at him til Flash tires himself out. He could also destroy the ground around him or just straight up fly out of Flashes reach and shoot at him from a safe position.

@bmckeniff.12460 Key issue with your statement on Flash beating Darkseid is, he has no help in this fight. He has no Black Racer or Radion Bullet. No Batman to help. No other Flashes. This is a one on one. Flash gets stomped.

Darkseid for the win!!!

This is Darkseid, all day, all night, from every direction at the same time.
Most people are coming to see the Nightwing vs Dr. Fate match-up and getting to their airports & teleports early, to avoid the rush and maybe get a cheap stand-by ticket.

Final Crisis showed that in that continuity Darkseid is multiversal and never really quite completely dead. Even of you take the “Miracle Machine” as the be all/end all. It is both that and Superman singing (seriously…they went with that) to finally “end” Darkseid.

Certainly using his pre-COIE, Great Darkness Saga power set: transposing two planets in different solar systems, mental control over the entire planet of Daxam, instantly absorbing all the info from the mind of another being and creating, in tangible form, an opponent’s worst possible fear. The entire Legion of Super Heroes and HighFather had to combine all their powers to defeat him. Darkseid was also on of the team of the last 4 entities used to defeat the Anti-Monitor.

Oh…did I mention he also has the anti-life equation? (All the New Genesis gods ran and hid on earth when that happened.) Reaction times in nano, arguably, even pico seconds. Ha can battle multiple Kryptonians simultaneously to a stand-still. Since he is multi-versal, he is right on par with the power of the speed force.

Taking out The Flash in a flash or toying with Nightwing for an hour, just for the sheer humor of it. What ever makes for the most amusement at that moment.

But, wait…Dr. Fate will take out Nightwing on the other side of the bracket. He can save us in the final…yeah…about that…

Brushing aside a single one of the Lords of Order…that’s not even breaking a sweat for the Lord of Apokolips. Even under the assumption that Fate goes full “Nabu”. What’s Nabu really going to throw against him…hmmm…let’s see what’s in Dr. Fate helmet of tricks, shall we…

Super strength, but not as physically powerful as Darkseid.
Flight…well Darkseid’s a match for him there.
Telekinesis and/or telepathy…is Fate’s telekinesis capable of swapping two planets from two different solar systems…uhmmm…not feeling the love about level of telekinesis. Telepathy not really a highly useful super power in a one-on-one battle.
Fate’s force shields can’t last indefinitely against Darkseid’s physical power and omega beams.
Lighting and fire…Have you seen Apokolips?
Using the dead to predict the future (aka necromancy)…all of those predictions show Dr. Fate the same thing. Avoid the hospital bills and don’t even show up.
Time travel, teleportation, phasing & astral projection….If you missed the bit above about Darkseid being multi-versal…you might want to go re-read that bit.
Let’s not forget about invisibility…Darkseid can’t turn invisible. So that’s really the only power Dr. Fate has that Darkseid can’t meet or exceed.

Darkseid reigns supreme. They might as well just put the “Final Four” on Apokolips. Darkseid might be a bit more considerate about the destruction around him if it was on Apokolips…maybe…just maybe…if he’s in a particularly benevolent mood that day.

Maybe a silly question, but can anyone come up with better emojis to represent each of these characters?

@AppleJack Thanks for the shout-out.

The closest I could find.

in homage to his visual appearance.

because we know who’s breaking out the bubbly at the post-Final after-party.

(My personal favorite) because you know, when ever Darkseid shows up, in books or film/tv, it means one thing. Get your popcorn ready, cuz this is gonna have to be an epic throw down to have a hope of taking him down.

Look. Dick Grayson is my Bae

and as much as I love to imagine him all hunky, roughed up and rugged, bringing Daddy home that

even I have to admit, this is Darkseid’s game to win. It’s not fun imagining Nightwing take a beating from any of these competitors

Flash all the way!

I was hoping it wouldn’t come to this…

This is a real-life candid photo of Darkseid, untouched by his PR team (have you ever noticed how processed images we usually see of him are?). He’s ten inches tall and machine washable (because children snot on him). 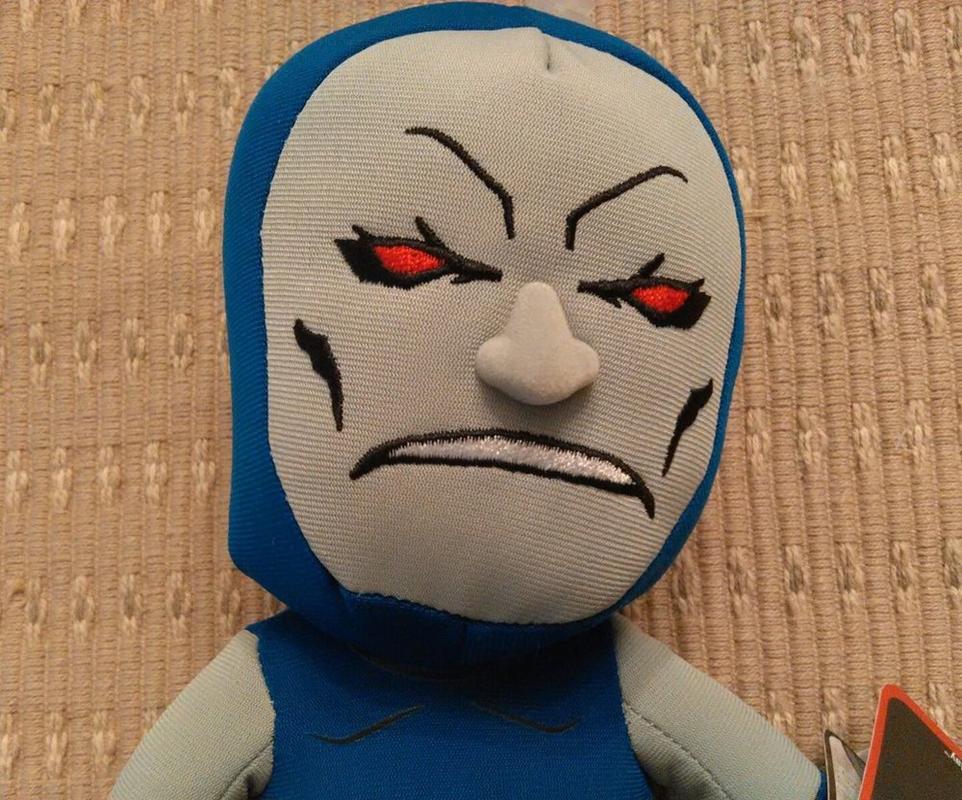 Flash, every day. All day.