MEGA POLL: Who is Batman’s most ACCOMPLISHED protégé? (Robin Edition) 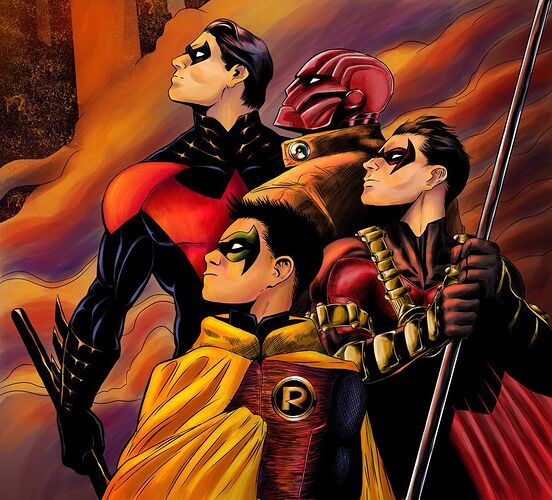 Alright everybody, this ones a doozy! It may seem obvious to some and difficult to others but nevertheless I am interested to know which Robin grew to be the most accomplished man. You may think that sounds vague or left for interpretation, and intentionally so. Please let us know who you think stands above the rest and not only that, help us believe you by telling us why you think he deserves the title.

)
Thank you to @Izzy11 for reminding me Stephanie definitely deserves a mention.
And thank you to @LeonardoMyst for not letting us forget about the amazing Helena!

The Robin Square Off

Dick was the first Robin. He moved on to a new identity and led a team that took down world class threats. He took on the mantle of Batman successfully for a time.

This was hard, because when I think of accomplished, I think about leading or being on teams, doing specific things or events that would be an accomplishment to us as normal people… basically the literal meaning if accomplishment. I voted for Dick because he has accomplished quite a lot, but I also would have voted for Tim as well, as both of them have led teams (Teen Titans) but Dick is one of the leaders of the Titans team, while Tim hasn’t yet. Dick has also been a secret agent (whether you love it or hate it, it happened), he’s had multiple jobs as a civilian, but we all know about his time being a cop. Tim has quite a few accomplishments himself, such as traveling around the world by himself as a teen, and he’s been said to be a better detective than Batman. But for now, I do have to go with Dick. (I love Jason but I must be truthful here)

Well for me it was a close call between Dick and Tim. They are both good leaders of teams that work well together. They both lead in a way that makes it feel like a family but also fair and commanding when need be. I think I remember there being some crossover event where it mentioned that when all the people there needed a leader they automatically looked to Nightwing (and this was a group of both titans and Justice League members). Really they are both just great people when they are in or out of costume and I had trouble deciding which was better for this answer.
The deciding factor ended up being while I was thinking my finger slipped and clicked on Tim. So there you go i guess lol

I had to go with Dick, because not only is he basically the OG sidekick that all such characters, DC, Marvel and everywhere in between are based on. Then there is his experience as leader of the Teen Titans, being Batman multiple times, a super-spy, and everything in between.

having simply been around the longest dick has done the most

I have to agree with you there. He does seem to be the one they look to when bats is MIA, says a lot about the guy.

Haha I’m sure Dick wouldn’t be to happy about that fingers slip! I agree with your thoughts though. Especially the family aspect. That was a good call out as they are both very approachable and kind leaders, yet like you said, command the scene when need be.

The accolades speak for themselves don’t they! I never really thought about it but you’re totally right about him being the OG sidekick. Brings in a whole new element to an already amazing character.

In this case I think you’re right, but length of time does not always equate to more things achieved. Sometimes you get kidnapped by the joker and while your being tortured all your teammates are out there growing and learning and leading teams. Gotta make for lost time somehow though! Even even that means finishing the race last!

I chose Dick because despite Batman being my absolute, I feel Dick is a more successful version of Batman.

Poor Damian getting no love

Was just thinking of where they started from to now. Yes Graysons is a favorite and along with tim probably the most stable and put together. As Matches mentioned the accolades speak for themselves but who he is now and he’s personal growth from his first day as Robin I think Jason is my choice. Not sure if he or Grayson would win in a fight but I beat it would be very close. He only joined the TT here and there but he has the outlaws, he didn’t come from a loving family and he lost them too anyways. Grayson in a way came back from the dead kinda with the whole bullet to the head thing if folks are counting that as canon. But I’d say Jasons death was more to overcome and grow as a person. Tim he’s the most normal for sure but looking at backstory’s and what they’ve come from besides homing in on his detective skills and combat he prob would have ended up doing just fine if he never joined the bat fam maybe would’ve ended up a detective or cyber analyses tech anyways. Damian is awesome to me and on of my favorite robins but his growth since becoming robin has been mostly moral inner growth Ra’s and his momma had givin him a big head start with the combat. And his ethics are still a struggle for him and thats something he and Jason share but Its Jason for me. Yeah, think about what that kid came from to who he is now sure he’s not the gold standard for capes or cowls but he’s good, he saves people, he’s overcame more than the others I believe.

Holy crap wasn’t expecting to go on a ramble first thing in the morning. Okay heading out. have a good one y’all.

I would have to say Tim because of what he was able to accomplish in such a short period of time.

I feel that these make him much more accomplished then Dick and it’s a shame we don’t get more of him. I will admit Dick is just as good as Tim, but I feel Tim has done more as a person than Dick. He put on the suit because no one would and he is always putting others in front of himself. It’s something I greatly admire and hope will be cared into his first live action appearance.

I just want to point out Stephanie is also very accomplished, has been spoiler, robin and Batgirl
succesfuly did college and superheroing
gained batman’s trust despite his reservations
sparred with Cassandra Cain on weekly/daily basis
and bunch of other cool stuff

That was a magnificent ramble!! And exactly the kind of response I was looking for. I stand by Dick but man I was really leaning towards Jason reading your post. I really like how you pointed out that there’s a big difference between where Jason started and ended compare to the rest of the gang. His whole life was a tragedy and he somehow does his best to overcome all of it. Quite the accomplishment of you ask me.

You make an interesting point, being a good man IS just as important as good hero and Tim does an amazing job at both. His accolades also speak for themselves like Dick but I don’t know, it’s be a close match between those two. Thanks for the great reply!