Meet the Authority, the Anti-Justice League 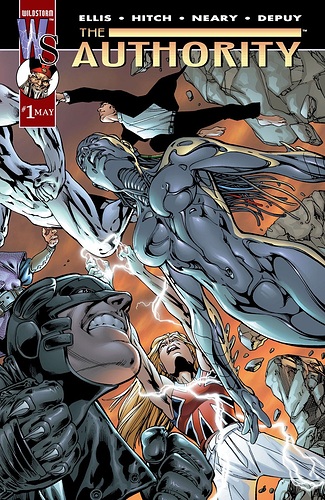 In Grant Morrison and Mikel Janín’s Superman and the Authority, the Man of Steel taps Manchester Black to help him recruit a new Authority when it becomes clear he needs a team that’s willing to bend rules and work on the sly. It’s a decision that makes a lot of sense if you’re familiar with the Authority, but if you’re not…well, you’re likely scratching your head and wondering what’s going on. After all, the Authority hasn’t appeared in any of DC’s movies or TV shows and it’s barely appeared within the DC Universe. There are A LOT of rabid DC fans—including several here at DCComics.com—that know next to nothing about the Authority. So, if that’s you, we’ve put together a little primer on the team to help. Here’s everything you need to know about the Authority!

What is the Authority?
To put it simply, the Authority is a team of cynical, brutally pragmatic superheroes. The group first appeared in 1999’s The Authority, a title by writer Warren Ellis and artist Bryan Hitch. Some of the team members and concepts originated during Ellis’s run on Stormwatch.

Wait, What was Stormwatch?
Stormwatch was a team book created by Jim Lee (maybe you’ve heard of him?) published for the WildStorm imprint. The title followed a superhero black-ops group funded by the United Nations. Consider it a prequel to the Authority.

How Did the Authority Form?
After the United Nations shut down Stormwatch, Jenny Sparks (more on her in a moment) gathered some of the group’s former members along with a few new faces to form a new team. Jenny realized that disbanding Stormwatch left the world vulnerable to attack and she wanted to stay one step ahead. However, unlike Stormwatch, this new team wouldn’t have to worry about the United Nations or any political implications as they dealt with enemy threats. In other words, they answer to their own authority.

Who are the Members?
Like most superhero teams, the Authority has a rotating roster of powerhouses. Here’s a brief rundown on their original lineup:

To learn more about The Authority and find answers to your questions, head over to DC Comics!

Are you a fan of The Authority? Let us know in the comments below!

Fan isn’t a strong enough term for my love of The Authority. By far my favorite team book. If you haven’t read volume 1 you are doing yourself a disservice. Yes several of the characters are derivatives of characters you know, but they do evolve into drastic differences from their templates.

I wasn’t very supportive of Superman & The Authority when I first heard about it and I’m still not completely supportive of it now, no Jack Hawksmoor or Engineer, but if this book does well maybe, hopefully we will get more Wildstorm characters in the DCU.

Are you a fan of The Authority? Let us know in the comments below!

Yeah…you might say that, considering The Authority v1 is one of my absolute all-time favorite titles ever and it’s my second favorite WildStorm book of all time.

Somebody should put a Spotlight Collection together for The Authority, especially since there’s a renewed focus on them, thanks to Superman and The Authority.

It’d be a good way to promote the WildStorm stuff in our library that we (for whatever reason) hardly ever promote, afterall…

I agree love the Authority, it’s art and writing on the original run, can’t wait to see the new Authority.

Have you read Superman and The Authority #1 yet?

As Ferris Buller once said, “It is so choice. I highly recommend you pick one up.”

I just picked it up at the store yesterday, will probably read tonight. One can never go wrong by following Ferris’s advice or Spicoli’s.

One can never go wrong by following Ferris’s advice or Spicoli’s.

Imagine if those two could have been in a movie.

It would be…“Ferris Bueller’s Day at Ridgemont High”.

Cam would probably get wasted with Spicoli, while Sloane and Linda become BFFs as Mr. Rooney (played by someone other than Jeffrey Jones) pokes around Ridgemont as he, once more, fruitlessly tries to catch Ferris.