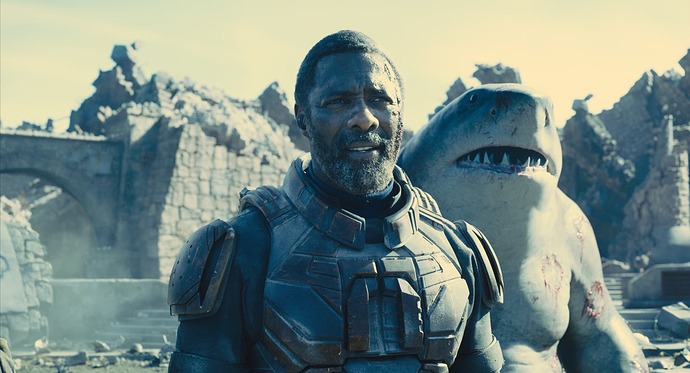 Since 1987, Suicide Squad has always been about shining the spotlight on DC’s lesser-known characters, giving them a unique chance to show off what makes them an asset—if not as a super-villain, then as a member of Task Force X. Love her or hate her, Amanda Waller often isn’t picky with whom she gives a shot on the Squad. And there are few better at lining up shots than Robert DuBois, better known as Bloodsport .

But what is Bloodsport’s deal, exactly? What separates him from the Deadshots and Deathstrokes of the world? Well, for starters, when it comes to his enemies, it’s hard to aim much higher than DuBois has. Just as Bane is forever known as the man who broke Batman’s back, Bloodsport’s most famous feat is pulling the trigger on the Man of Steel. 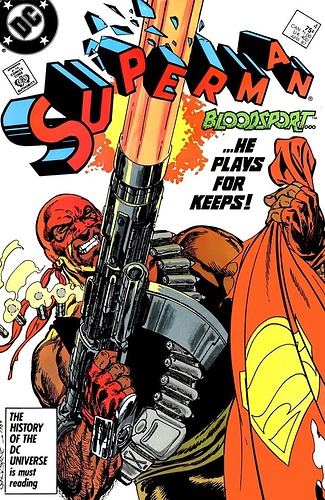 When John Byrne reinvented Superman for the 1980s following Crisis on Infinite Earths, readers were presented with a modern Superman who faced modern problems—corporate greed, cults of personality, equal rights for women in the workplace. But one of the first new villains created for Superman in this era, Robert DuBois, stood in for the post-war trauma still lingering from the Vietnam War.

Bloodsport’s story is told for the first time in 1987’s Superman [#4] —and if you’re only going to read one comic about him, that’s the one to read. Burdened with survivor’s guilt for allowing his brother to go overseas in his name, DuBois was identified by a psychologist in Lex Luthor’s service as a prime candidate for supervillainy, turning his anger and fear against Superman. He was given the codename “Bloodsport,” and a small teleportation device which he could use to access an unlimited supply of weaponry. But while Luthor’s intended target was Superman, Bloodsport’s rage spilled out towards the people of Metropolis itself. In DuBois’ view, they were squandering the safety and freedom denied to his brother and, in his own warped perspective, to himself, now believing himself to have gone to fight in Vietnam as well.

In his first rampage through the city, Bloodsport killed at least twenty-five people. With Superman unaware of Bloodsport’s teleportation device, DuBois summoned a handgun in their first confrontation loaded with Kryptonite bullets and took the big man out of commission with a shot to the shoulder. It was the intrepid Jimmy Olsen who unraveled DuBois’ origins, and by confronting him with the truth of his history, led the killer to surrender.

To learn more about what Bloodsport’s deal really is, head on over to DC Comics!

Are you a fan of Bloodsport? Let us know in the comments below!

This is a trick question. Nobody’s a fan of Bloodsport. One is a deluded draft dodger and another is a white supremacist. But hey, maybe this new version will change people’s minds.

Can confirm, this version’s pretty awesome