Joshua Hale Fialkov is miscredited as co-writer of Red Lanterns #21-22. He was originally solicited to work on those issues, but exited the series before he began and Charles Soule took over. Fialkov is not credited in the issues themselves. 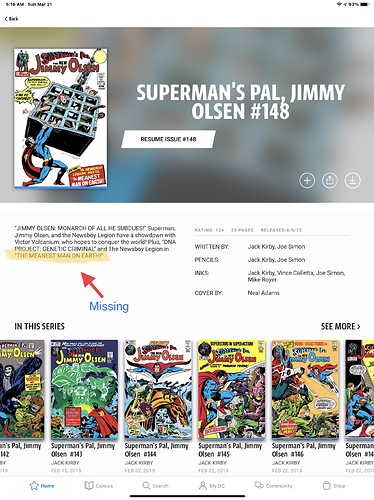 Thank you for letting us know @HubCityQuestion! I’ve handed this upwards to be looked at :).

Thank you for reporting this @mostly42harmless! This has been passed upwards to the team.

Thanks Kookie! I’ve reported this to the team for them to take a look at

All of the issues for the above two series also have incorrect publication dates. It looks like whoever put them together simply chose the first Wednesday of each month, rather than the exact date that the issues were released. The accurate release dates for each issue can be found here and here.

To be as detailed as possible:

I’ve added these to the list and re-reported your Ex Machina report. Ty @KookieSuperApe!

The 2009 Red Tornado series miscredits Greg Weisman as a co-writer. Weisman was originally slated to write this series but was replaced by Kevin VanHook. Weisman’s name does not appear in the issues.

Thanks for the heads up, HCQ! I’ve let the team know

Hello! Welcome to the community

Thanks for the reports, I’ve added them to the list for the DC Team to take a look at.

A good chunk of new 52 batman Tom kings run has the same problem.

Hi @margopk33.23700, I’m sorry to hear you’re having this issue. Are you having issues with images loading in any other issues? And what device are you reading them on?

i’m reading on an evoo which is running up to date android 9. New 52 batman stops working at 18 and continues not working for at least 3 more issues. Keep in mind the comic book opens, but its the images on the pages that are failing to load.

I reached out to support and havent gotten a second response after “did you delete the app and redownload it” which i have done.

Thank you so much for responding

We’ve sent ya a DM regarding this issue, just posting here too so we have a record of it. Thanks!

(Side note: it would be cool if the digitization team could re-do those two issues so that the back-up stories could be included as intended.)

I’ve taken note of these reports and will send them on up, thanks so much!