Comic writer Martin Pasko passed away Sunday. He wrote a ton of great Superman stories for Action and Superman titles in the mid 70s through the early 80s. It would be a nice way to honor him by making more of his work available digitally.

Before he wrote professionally for DC Comics, Martin was a grade A letter hack. He sent in scores of missives to the DC editors often taking them, and their creative teams to task, and getting the sobriquet “Pesky Pasko” for his persistence. He was the first Superman writer to intelligently tackle the Lois and Clark relationship. He christened the new DC Comics Presents team-up book in 1978 with s spectacular two-part Superman/Flash race. And he “put” Nabu in Doctor Fate’s helmet in First Issue Special #9. He followed that up later with a stunning Doctor Fate run in the back of the current Flash comic. His plots and stories were solid and entertaining, and his characterizations of current DC heroes were deep and nuanced. I am sad to hear of his passing, and I will say a prayer for him and his family.

His run on Swamp Thing is an underrated treasure: a gloriously rambling road trip/conspiracy saga/ supernatural mystery 10 years ahead of the X-Files.

Of his work, the Superman output is what I’ve enjoyed the most.

The next time I’m in a comic shop, I’ll thumb through their Action and Superman bins and pick up a few of each to salute Mr. Pasko.

I just finished rereading his FIRST ISSUE SPECIAL Dr Fate story with Walter Simonson. I did some looking on DCU trying to find the issues of FLASH that had the “Dr Fate” series by him and Keith Giffen only to find that they’re not available here. Can we please do something about that, DCU?

I followed Mr Pasko on Facebook and even got to interact with him a few times. He was a very kind and witty gentleman and I enjoyed seeing his thoughts and musings in my FB feed.
RIP, Martin Pasko. Thanks for all the great stories.

Why are so many of his comics missing from the service? The Superman comics are littered with holes.

As @baseballmaniac01.45870 noted, Mr. Pasko was a prolific letter writer and often published by DC. One of his letters was published in the legendary Green Lantern #76, the first GL/GA story by Mr. Dennis O’Neil and Mr. Neal Adams. I had the opportunity to review the original comic recently. That letter, published across two pages in that comic, is reproduced below. 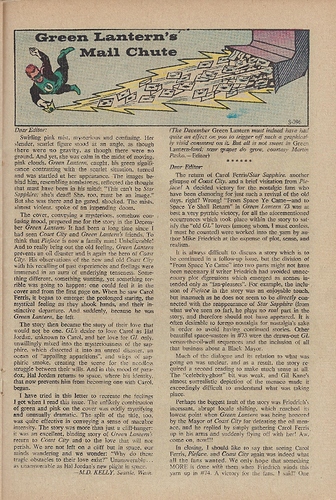 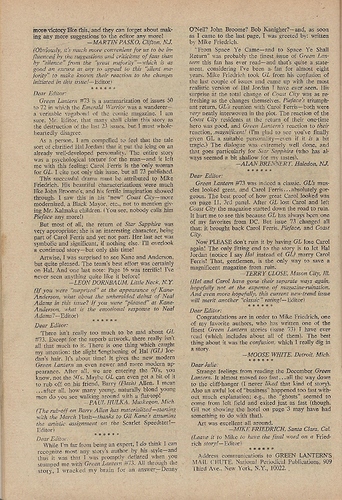 Mr. Mark Evanier has a few words about his long time friend, along with the suggestion of possibly another story to follow.

Thanks for sharing. Here’s our salute to the great Mr. Pasko… We Remember DC Writer Martin Pasko with 5 Essential Stories

I truly do not understand some of the holes in their runs for even the more prominent characters, especially considering what they DO have available in some cases. I feel blessed that we have all 25 issues of “Hourman,” one of the greatest series of all time, in my opinion. But we don’t have all the issues of “Action Comics” and “Superman”? What on Earth?

So I’m not crazy. Thank you. Whenever I’ve brought it up in the past, people shrug it off like I’m asking for some obscure series to be finished. It sucks that you can’t sit down and read every superman book from Crisis to Crisis like you can for Batman. They’ve been digitizing comics for over 10 years now.

Definitely not crazy. And it’s even crazier when we get into the “Triangle Era”: Some of the titles are digitized, and others are not, so you go to read the next issue in the storyline and it just isn’t there. Holes are crazy enough, but they’re crazier when a reader can’t even finish a story and DC is spending its time digitizing “Eclipso” instead. (Really. They are.)

They never finished H-E-R-O, stopping 6 issues short of the end.

They never finished Volume 2 of Green Arrow, even though you’d think that they’d want their Green Arrow stash FULL for all the people who became Green Arrow fans in the wake of the CW show.

They don’t seem to have all the issues of Dixon’s excellent “Birds of Prey” even though there was a surprisingly good movie.

They are a dozen or so issues shy of having finished “Justice League Unlimited” comic series and a few short of the “Batman: Brave and the Bold” animated series comics even though those animated series are beloved.

No, you’re not crazy. They are.

@Kal-L & @rexmanning: Thanks for voicing your consternation aimed at the paucity of Superman books on this app. Action Comics is well represented (albeit with some holes), But the main Superman title is woefully represented. The entire Silver Age of “Superman” is one book; Superman #123. The run than resumes 110 issues later with #233 at the beginning of the Bronze Age. I could list what’s missing, but I don’t want to embarrass DC. Suffice it to say, there’s a lengthy run of Sheldon Moldoff, “bug-eyed alien Detective Comics” featured but not Superman #199 (Superman’s Race With The Flash)? This absence–among dozens of others–is criminal.