‘On Leather Wings’ is the pilot episode of Batman: The Animated Series. It introduces the iconic villain Man-Bat to the show and explains the background story behind the character. This episode also marks the first appearance of Harvey Bullock, Harvey Dent, Alfred Pennyworth, Hamilton Hill, Dr. March and Francine Langstrom. This is also the first time on the show that the Batmobile and the Batcomputer are portrayed.
Despite being the first produced episode, it was the 2nd to be aired.
Batman is labeled as the culprit in a series of aerial attacks on pharmaceutical companies. But the caped crusader’s own investigation leads him to Dr. Kirk Langstom, whose experiments at crossing species have turned him into the fearsome Man-Bat!

I decided to mix it up with this piece and use Batman’s The New Adventures costume chasing the classic looking Man-Bat from BTAS. 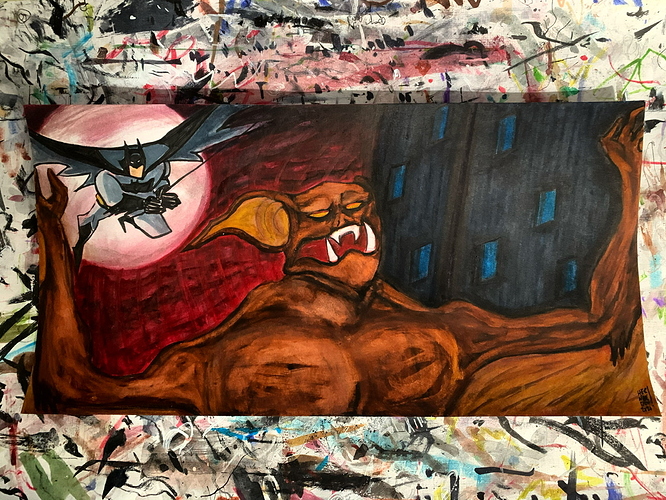 I like this a lot! I just recently watched this episode, and you definitely did a great job of recreating the feel of it.

Thanks! Glad you dig it! @Green.Lantern I also watched it today while finishing it up today.

Really cool perspective! I love the way Batman stands out against the moon. Awesome job!

I also really like the information you provide about the pieces you make. It’s always fun to read.

@WingsOfAether Appreciate ya checking out the latest piece in my BTAS study, thanks again for the kind words!