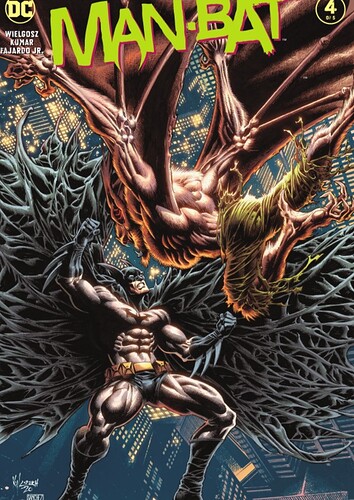 Sorry I bit late I taking other business switching gear Man-Bat mini series about to end next month let see how turn out. The Langstroms are now trapped in a permanent loop, toys for Jonathan Crane. Instead of fear gas, Scarecrow is now using subliminal messaging to influence his victims. He forces the former couple to work together to fix the sonic cannon that Kirk broke. At first, they are lead to believe that they live a happy life, content with each other. But as Crane’s torture worsens to speed them up, cracks are beginning to show. Batman is desperately searching for Kirk and Francine. But there may not be much left of Kirk by the time he gets there.

Batman and Man-Bat then team up to fight Scarecrow and his gang, but their fight went south quickly. Scarecrow shot a gun at Batman that uses subliminal messages to bring out the worst in someone. The resulting blast from Scarecrow’s gun renders him unconscious, but The subliminal messages have brought out the worst of Batman’s violence as he turned his attention towards Man-Bat. Batman threatens Man-Bat before kicking him to the ground. In fear of his life, Man-Bat turned to a dangerous chemical to save him from Batman’s rage.
Man-Bat serum, Kirk’s body is finally starting to shut down. Kirk Langstrom still feels he can do good in the world as Man-Bat and has been working ever diligently to create a cure and stabilize himself. Kirk had a theory that to stabilize himself. If the venom did not cure Kirk, it would most likely accelerate his death. Standing before Batman, with bloodlust in his eyes, Man-Bat saw no choice but to inject himself with the venom.The formula pushes him to reach his maximum power as King Man-Bat.