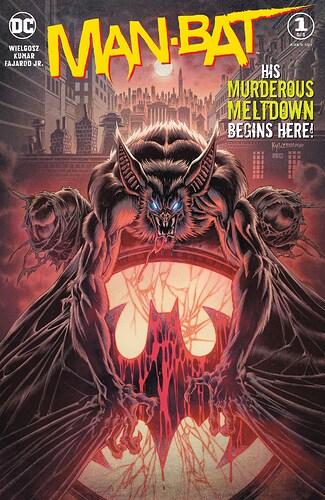 Man-bat is here is time for review this issue. Man-Bat, or Kirk Langstrom, is a biologist who was enacting research to help the hearing impaired. His research went awry, however, when he created a serum. Upon ingesting the serum, it turns him into a giant bat, losing much of his intelligence and reason. Throughout his appearances, he has been a hero and a villain, battling Batman on numerous occasions. Headed for Blackgate and desperate to escape his fate, he eventually gives in to the “Man-Bat” in his brain and becomes the monster once more. The reveal that the Suicide Squad is coming after him should make for some good action, although the most interesting part of this issue is definitely Kirk’s inner battle. This only being I will continued what you on Man-bat issue #1

Knowing that this takes place before Justice League Dark, I can’t help but feel that we already know how this is gonna end. Still, it should be interesting to see this journey that I’m assuming will finally lead to Kirk taking a heroic turn and getting involved w/ the team. And I definitely agree that bringing in the Squad is an exciting move that should only serve to increase the fun

Kumar’s art is stellar. Loved the attention to detail like Batman wearing the Rebirth-era uniform.