Hello there to my comic book fans out there. I had some late night thoughts on how I would make some characters different in terms of what superhero group changes. Now, yes I kbow there an infinite amount of earths. So, let’s call this Earth that I am referring to as Earth - 999. I don’t think there has been this sort of Earth yet in DC lore. This will be dufferent, but letssau tbat things stay the same in terms of origin.

I am going to start with The Justice Society of America.
Starman (Ted Knight), Doctor Midnite, Hawkman, Stripsey, The Flash (Jay Garrick), Green Lantern (Allen Scott), Doctor Fate, and Black Canary (Dinah Drake). These are the first wave of superheroes for what is it come later on. I have excluded some in order to make a point. This is the first generation, and I apologize if I have left some heroes out.

Now, we move onto the Justice League of America where thks will be the second generation of heroes along with some new heroes along the way.
Superman, Batman, Wonder Woman, Aquaman, Giovani Zatara, Black Canary (Dinah Lance), Green Arrow (Ollie), Fire, Ice, Blue Beetle (Kord), The Atom (Ray Palmer), The Flash (Barry Allen), Green Lantern (Hal Jordan). I am fine with this lineup, as I see Zatara as a Justice League member more. I could have put him in the Society, but usually he’s more associated with the League.

Generation 3 - The Sidekick/ Offspring Breakout. Alright, this is where I can change up a few things and how we could make things better. So, we have the Teen Titans roster here and this will be an interesting one. Robin/Nightwing, Kid Flash (Wally West), Aqualad (Garth), Donna Troy, Starfire, Cyborg, Zatanna, Blue Beetle (Jamie Reyes), Raven, Stargirl (Courtney Whitmore), Speedy (Roy Harper). Zatanna I put on this list, as her dad is with the League. It wouldn’t hurt for her to be on the Titans roster, as I like the different dynamic. Plus, an interaction with her and Raven seems like a hot take to see how two users of different magics can coexist.

Anyway, what are you folks thoughts on these rosters? Who would you move around to see on different places? 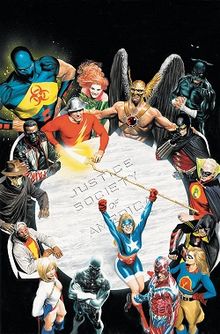 I usually see Zatanna as more of a Justice Leaguer, but it would be interesting to see her and Raven interact! I can’t remember every seeing them together.

Any thoughts on the younger sidekick generation? Bart Allen, Tim Drake, Irey West, Damian Wayne, etc. Would they be rolled in with the Teen Titans or be on separate teams, like Young Justice?

I always saw the superhero generational break down like this:

I would sort them into the Teen Titans as well. Where they are shifted into the focus, after the rest of original Titans either go join the League, solo, or whatever.

Where you lump Zatanna into?

@Zuberi
Historically? Zatanna’s a boomer. She was Justice League all the way.

But… comic books hold infinite possibilities. On an alternate earth, you could put her anywhere you wanted to.

Awesome! I’ve been meaning to read Bombshells for ages, that makes me even more excited for it

I just started myself, but it will be a deep dive for sure.

The thing I look at is that her father was in the JSA and JL depending on what you read. However, lately I view her as a Titan character.