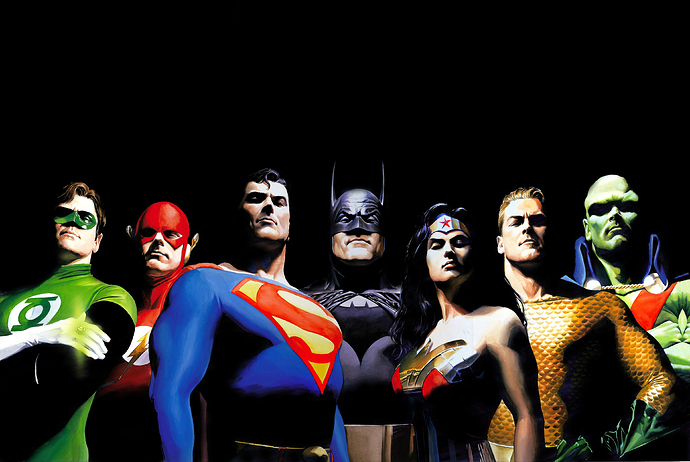 gz8ittzd4ew213790×2539 3.41 MB
This was inspired by a thread on Twitter by @marsanj47
My personal team would be lead by Dick Grayson as Nightwing as the leader. Basically taking the role of Batman on this new team.

Next up would be Mister Miracle and Big Barda. From the X Pits on Apokolips, these two fight off threats from the 4th world and beyond. They’re the heart of the team.

The fourth member of this team would be the muck encrusted mockery of a man, Swamp Thing. He would be the chosen champion of the Green. Along with Big Barda, he is the muscle. He represents what the league is trying to protect as a whole, the Earth.

The fifth member of the team would be Virgil Hawkens, AKA Static. He’s a hero that needs more attention and has earned his spot on this incarnation of the league. Nightwing empathizes with the plight of teenage superheroics and takes him under his wing and invites him to join the league.

The sixth member of the league would be Vixen. While Swamp Thing has a connection to the Green, Vixen connects with the Red. She is also a JL veteran and an awesome character all around.

The seventh and final member of the team is Zatanna. She possesses a connection to the mystical side of the DC universe, Fighting off threats of the magical variety.

And that’s my team! I tried to make it different from any other JL line ups while also making the characters represent different aspects of the DC universe as a whole. Nightwing represents humanity, Static represents Meta Humans, Big Barda and Mister Miracle represent the 4th world and the DC cosmology, Swamp Thing represents the Green of the earth, Vixen represents the Red, and Zatanna represents the mystic side. Thanks for taking a look at my JL line up and please leave a comment with your unique JL line up!

My team consists of Titans

While Nightwing is a qualified leader, I’m going to skip over him because what the League really needs out of a non-powered bat-type is a strategist and detective. From there, it’s a rough choice between Barbara Gordon and Tim Drake, but I think Babs has more experience coordinating and supervising a team and could deal more effectively with a global crisis.

We need someone who can be an effective field leader. I think Barda is a strong choice for this, given that she commanded the Female Furies on Apokalips.

Next, let’s pump up our firepower. Captain Atom can bring a lot of raw power to bear and his military experience will make him a reliable team player.

Power’s nice, but there’s also a lot to be said for versatility. I was thinking about Firestorm in this regard, but first, I wouldn’t know whether to count him as one or two, and second, we can do better. Magic is extremely flexible. The Spectre, the Phantom Stranger, and Doctor Fate are probably the top choices for magical power, but they’re kind of… unreliable. Zatanna is probably a better choice, all things considered. She can bring some psychic abilities to the table as well.

Alright, I said I only wanted one non-powered type, but let’s be honest, somebody has to cook up nonsensical gadgets that can save the day. That seems like a job for Mister Terrific.

Honestly, having a speedster is just too useful to pass up. Wally West would be a good choice.

Similarly, a Kryptonian or Martian would be good. We’re running out of spots on this team and physical power is pretty well covered, so let’s go for the psychic mojo and pick Miss Martian.

Shazam, New Super-Man, Green Arrow, Black Canary, Green Lantern Jessica Cruz, Hawkman, and the Atom (Laethwyn Palmer, Ray’s daughter from either the future or a parallel Earth depending on how I want to play it).
For me, a good team line-up needs good team dynamics. Green Arrow and Black Canary have a very storied, will they/won’t they romantic history, so putting them on the same team should lead to some interesting results. Likewise, Green Arrow and Hawkman have a tendency to butt heads, and I can see Carter clashing with Dinah over who gets to lead (they’ll be co-leaders). I created Laethwyn Palmer since the team could use a science person, and her being Ray’s daughter puts a neat spin on the old Hawkman/Atom team ups. Likewise, her being from the future or a parallel Earth opens up some interesting storylines.
I chose Jessica Cruz and Shazam so the team could have a “space person” and a “magic person,” respectively, while Jessica also puts a new spin on the “Lantern/Arrow” team-up and Shazam adds some much needed muscle.
Lastly there’s Kong Kenan, the New Super-Man of China. Kenan is generally portrayed as stubborn and arrogant, and him being a teenager should clash well with Shazam (who’s secretly a teenager). Plus, depending on how young we want to make Laethwyn, love triangle?

Super late to the party here but I just made a video about this exact premise!

The video’s on the ComicBreakers YouTube channel if you want to check it out!

Nightwing
Captain Marvel
Atom (7 out of 8 of my favorite JLA members are the original 7, Ray Palmer is the other)
Mera
Zatanna
Plastic Man
Captain Comet

This is a really fun question! I’m going to pick a Legion of Super-Heroes team that could be used for some time-swap shenanigans: