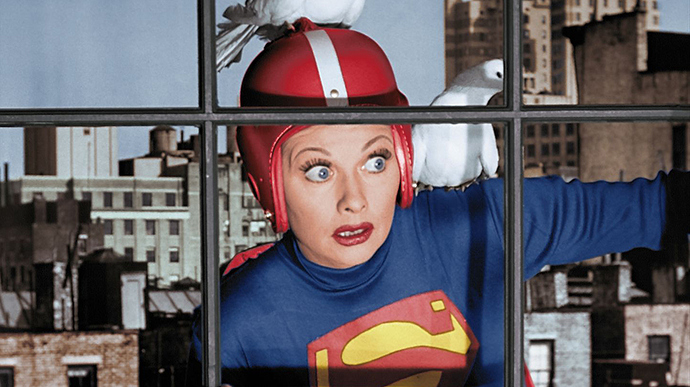 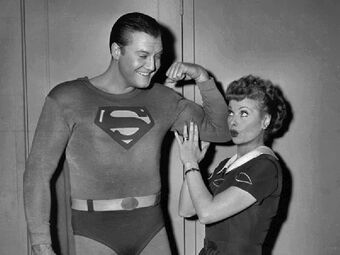 During the run of hit show The Adventures of Superman actor George Reeves guest star on a hit tv show I Love Lucy. The show was in it’s sixth season and this was the only show Reeves could guest star.
The episode Lucy and Superman has alot of great Moments and connections! Doris Singleton who played Caroline Appleby made her acting debut on The Adventures of Superman!
The fans of 1966 Batman will recognize Aunt Harriet, Madge Blake as a woman looking at the Apartment and freak out as she see Lucy who’s dress as Superman!
As for the guy who played Charlie Appleby, if you listen to his voice real carefully you’ll recognize him as the actor who play George Jetson on the classic animated show The Jetsons!
In real life Lucy had a fear of birds! In this episode she seem to overcome her fear and work with them!
Back to George Reeves, he was willing to come on a show if he could do a couple of stunts, and he did like jumping into a living room from a kitchen and moving the piano! Reeves did had the best line at the end, “Ricky you mean to tell me that you’ve been married to her for 15 years?” Ricky shout,“Yes 15 years!” And Reeves grin,“And they call me Superman!” You can find this classic episode on Hulu, I Love Lucy season 6.

Now here’s a fun little poll, I read somewhere that Lucy is the first ‘Supergirl’ on TV, since she was wearing the outfit and dress like Superman. Is Lucy really the first Supergirl?

Great post @Reaganfan78. How fortuitous, I just finished re-watching Adventures of Superman and I just didn’t feel Iike I completed the series without seeing this episode. Couldn’t remember the season/episode; much less where to watch it. Thanks!

P.S, I voted for Helen because Lucy was actually trying (desperately) to impersonate Superman (if memory serves) and Supergirl hadn’t had her first appearance yet. Maybe DC was inspired by I Love Lucy?!

Loved that show. Few people realize how beautiful Lucille Ball really was b/c she wanted to do comedy. She easily could’ve been a Sophia Loren or a Hedy Lamarr type. Thankfully, she chose her passion b/c she’s one of the best you’ll ever see.

If I’m not mistaken, she started off dancing/vaudeville . . . . I also believe she’s credited with the eyebrow liner for the perfect eyebrows. She used to shave them and paint them on. One of the many fun facts I saw and read about her at her Universal Studios Tribute Museum when she passed away. She was a true show woman and very dedicated to her profession. Loved watching her follow on series’ after I Love Lucy with real life adult children.

My favorite intro was to Here’s Lucy

That’s awesome that u went to that. I’ve always loved her & Carol Burnett. I know they also were pioneers in a lot of 1st’s for female actors. Burnett was the same. She could sing & was beautiful, but the world wouldn’t be the same if she didn’t choose comedy too.

I have always LOVED Lucy. In my humble opinion she was the funniest person who ever lived. Growing up in the "60’s my two favorite shows were “I Love Lucy” and “The Adventures of Superman” so when Lucy met The Man of Steel I was in heaven.

@msgtv: So true about Lucy and Desi. They truly were pioneers for the fledgling medium. Remember It was Desilu studios that gave us the original Star Trek tv series.

@baseballmaniac01.45870 @msgtv You beat me to it. It was Lucy who supported Star Trek and gave it the green light. Desilu also produced Mission Impossible another genre fave! Lucy was a great comedian and made the jump from radio to TV and insisted Desi costarred with her and fought for her husband. She was also was a beautiful chorus girl in her early movies.

Don’t forget about the UNTOUCHABLES! Desilu also green lite that great unforgettable cops & robbers vehicle for Robert Stack. That memorable Nelson Riddle theme and soundtrack, coupled with Walter Winchell’s narration is another plus in the Lucy/Desi column.

One of my favorite episodes of I Love Lucy!

Good insights @baseballmaniac01.45870, @TravisMorgan, and @wrightline1.42741. Glad to know I’m not the only one that grew up in the 60’s. And I was also watching Batman '66, the Apollo moon landings, and the Vietnam War.

I saw this a few years ago when CBS broadcast it in color.

I never saw this I Love Lucy episode but it’s really neat to see Aunt Harriet from Batman ‘66 in a “crossover”. I also love The Jetsons so that was another bonus fact for me! Lots of detailed research - thank you for sharing!