Looking for a Comic Series

I’m new to comics, and I heard about a comic series with the New Gods and the Justice League. All I know about it is that Justice Leaguers and New Gods split up into teams. Lightray flirts with Starfire, I think Batman goes with “the bug” character (lesser people of New Genesis) and that’s about it. I’m thinking it is older because it seems like Starfire isn’t as sexualized now a days. PLEASE HELP!!

I believe you might be thinking of Cosmic Odyssey, a 1988 miniseries written by Jim Starlin and drawn by Mike Mignola. The series featured the New Gods teaming-up with several DC heroes, including: Batman, Superman, Martian Manhunter, Starfire and Green Lantern John Stewart. The series helped to re-establish the New Gods within the greater DCU, and had notable ramifications for John Stewart.

Cosmic Odyssey is available on DCU and worth the read! 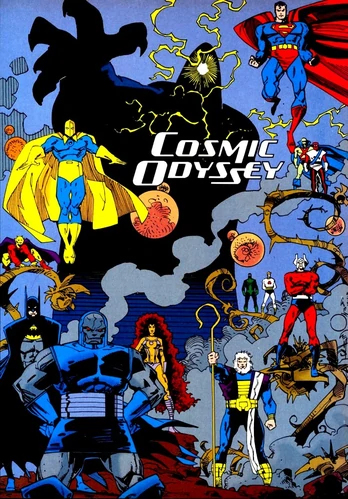 Welcome, It’s great that you are getting into comics and I hope you find that we have a great collection on here. Most of DC’s series are on with the exception of a few. If I could I would like to recommend a few series worth checking out along with Cosmic Odyssey.

I too.would suggest reading some comics

But First
Watch
Secret Origins the Story of DC Comics

In that hour and a half you will get a good overview of most od our comic book library. It was filmed in.2009 so of course can’t takk about new than that

It is by Year and Title and decribes each arc.

Julie Schwartz said to Denny O Neil once, “Every Comic Book is the first issue for some reader.”

Back in.the 1960s, a comic book story that went beyond one issue was rare and many comic books contained more than one story. Yet these comic books were relatively easy to understand in standalone issues.

Nowadays stories routinely take more than one issue. And routinely some understanding of what happened before to this character is required to understand the issue.

We now have more than 23,000 comic book, how can a reader new to DC navigate through the library to find the best story arcs and coverage of most major characters?

This guide may help.

First is a listing of 13 historic comic book.issues that are still readable today and give a reader of what comic books were like in the beginning.

You can safely skip all these issues if you want and go to the next list.

00 1938 Action.Comic 1 Reprinted in Superman 1 below. First Appearance of Superman

05 1941 All Star Comics 8. First Appearance of Wonder Woman. Skip the dated Justice Society stories and go to the back of the issue for the first Wonder Woman Story. See 1987 Wonder Woman by Perez and 2016 Wonder Woman Year One by Rucka Scott

12 1971 Comic Book Batman 232 “Daughter of the Demon” writer Denny O’ Neil and atist Neal Adams redefined the Batman from the campy figure in the 1966 Batman TV series into a dread avenger of the night. This story is one of the high points of their legendary run.

The next list is Recommendations for Best DC Stories

Comics must be in DC Library

Tge only exception is a Vertigo Title with Death as the main character.

Stories are relatively short arcs of consecutive issues, which means leaving out any ‘Done in One’ stories including Batman stories by O Neil and Adams. Exception is Anatomy Lesson by Alan Moore.

Very few Year One and Oriigin stories, which csn be found elsewhere easily

01 1960 Brave and the Bold 30 Best of the early Justice League of America stories and Last tryout of the JLA before receiving their own book. Flash, Green Lantern, Wonder Woman, Martian Manhunter, Aquaman Cameos by Superman and Batman. First comic book I ever read. By Gardner Fox

02 1961 Brave and the Bold 34 36 42 43 44 Hawkman by Schwartz Fox Kubert. Hawkman and Hawkgirl are married police officers from the planet Thanagar

03 1961 Flash 123, 129, 137 and Justice League of America 21 22
Introduced Earth 2 where the original 1940s Golden Age Flash and the Justice Society of America live.
Introduced the concept of parallel worlds and the Multiverse which existed until Crisis of infinite Earths in 1985.

06 1976 All Star Comics 58 on revival of Justice Society of America on Earth 2 Introduces Power Girl. By Conway Wood.

11 1986 Legends by John Byrne Shows the world after Crisis on Infinite Earths, where Dr Fate, Captain Marvel and Blue Beetle have always existed in the same world as Superman and Batman. FIrst time Darkseid is introduced as a major villain in the DC Universe, outside of Jack Kirby’s New Gods. Wally West in action as the new Flash and the new Suicide Squad has its first mission. Justice League is present as Justice League Detroit, including members Vixen, Vibe, Steel, Gypsy and Firestorm. Dr. Fate organizes The new Superman, Batman, The new Wonder Woman (first appearance), Captain Marvel, Guy Gardner, Black Canary, Beast Boy, Wally West Flash and the Blue Beetle to fight the forces ot Darkseid. Later Martian Manhunter is included. Most of these super heroes become the next Justice League.

12 1986 Man of Steel by John Byrne. Superman now sole survivor of Krypton. Gained powers after decades on Earth. So Supergirl and Superboy never existsed . Nowhere near as powerful.as previous version.

13 1987 Wonder Woman by Perez. This Diana is new to Man’s world. Not an experiencef super hero at all.

17 1993 Death High Cost of Living The Trade includes Death’s First Appearance in Sandman 8, 1991, Sound of Her Wings Neil Gaiman
(Not in library, available at Comixology or try Library or buy Graphic Novel trade)

18 1994 in the Zero Hour Crisis issue 61 of Legion of Super Heroes (1989) , two sets of Legionaires gradually fade from existence For LSH ifans, issue 61 is both sad and triumphant.
The Legion storyline starts again in a clear entertaining way, with the origin of the LSH by its three founders in two books Legion of Super Heroes and Legionaires. Both titles start with a 0 issues, then alternate LSH 62 then Legionaires 19 then 63, 20, 64 21, 65, 22 etc.

19 1994 Aquaman in issue 2, Arthur loses a hand, which is replaced with a harpoon. His Long Hair and attitude influenced the Justice League and Aquaman movies decades later. This is the Start of Aquaman as a Bad Ass, No Longer a Joke Hero who could only last an hour outside water, and whose only power was to talk to fish. By Peter David.

23 2000 Planetary Warren Ellis John Cassidy The book’s primary concern is unearthing the confluence of influences that led to the idea of The Superhero as our modern culture now knows it. From Doc Savage to James Bond; the Lone Ranger, Green Hornet and The Shadow; Tarzan, noir Private Eyes and Fu Man Chu; 1950’s Sci-Fi B-Movies, Godzilla and Hong Kong action flicks; Superman, Wonder Woman and Green Lantern; early Marvel comics, and more predominately, the work of Jack Kirby; the re-inventive, post-modern 1980’s DC comics work from English writers like Moore, Grant Morrision, Peter Milligan and company; all the way back to 19th century superhero precursors like Sherlock Holmes, Dracula and Frankenstein. Ellis and Cassaday leave no stone unturned when it comes to excavating the heart of the superhuman myth as it existed in the 20th Century and continues to exist to this day.

25 2002 Hawkman Hawkman and Hawkgirl now have their original 1940s origin of being reincarnated lovers through out all of history. This Hawkgirl is in her 20s and has no memory of their past lives together. By Geoff.Johns

27 2004 DC: The New Frontier by Darwyn Cooke. Set in late 50s and early 60s. Golden Age Superman Batman and Wonder Woman and Origins of Silver Age Age Green Lantern and Martian Manhunter plus Flash at stsrt of his career. Restart with second issue if can’t get into first issue. Also there is an extra one shot issue which is very good.

28 2004 Birds of Prey issue 56 on. Black Canary and Barbara Gordon as Oracle work as a team . Later Huntress (Helena Bertinelli) and Lady Blackhawk, displaced from the 1940s, are added to team

30 2006 A new Blue Beetle starts as Jamie Rayes, a teenage Hispanic character has an intelligent Scarab involuntarily inserted into his back, which gives him incomplete control of his new super powers.

33 2008 Superman The World of New Krypton by Geoff Johns James Robinson and Sterling Gates
The city of Kandor now resides near the Fortress of Solitude in the North Pole, populated by 100,000 Kryptonians. Superman attempts to aid the Kryptonians in their assimilation with the rest of the Earth, something very few Kryptonians seem interested in, including the city’s leaders.

34 2009 Batgirl is Stephanie Brown by Byran Miller. Set in time when Bruce Wayme is presumed dead, Dick Grayson is Batman, Damien Wayne is Robin and Barbara Gordon is Oracle. The best of all Batgirl Books

38 2011 Aquaman by Geoff Johns Movie has some ideas taken from this first arc.

40 2011 Frankenstein Agent of
S.H.A.D.E, plus the Creature Commandos, the Bride of Frankenstein and Ray Palmer by Jeff Lemire.

42 2013 Earth 2 17 on. New Super heroes from a world ravaged by Darkseid fight back including Thomas Wayne, Lois Lane, Jimmy Olsen, Aquawoman and a Zod, by Tom Taylor

45 2016 DC Universe Rebirth 1 Geoff Johns Reboot of Universe to restablish old relatioships and revive legacy characters like Wally West, the Flash for several decades and Kid Flash before that.

50 2017 Doomsday Clock by Geoff Johns Dr Manhattan of Watchmen has interfered with the History of the DC Universe, changing events. 1986 Watchmen is available as a Motion Comic in Vdeos. Main problem is thar one narrator does all voices, including females.