In the next upcoming episode of death battle, it’s Lobo, the Main Man VS Ghost Rider, the Spirit of Vengeance. Who do you think would win in a fight to the death? 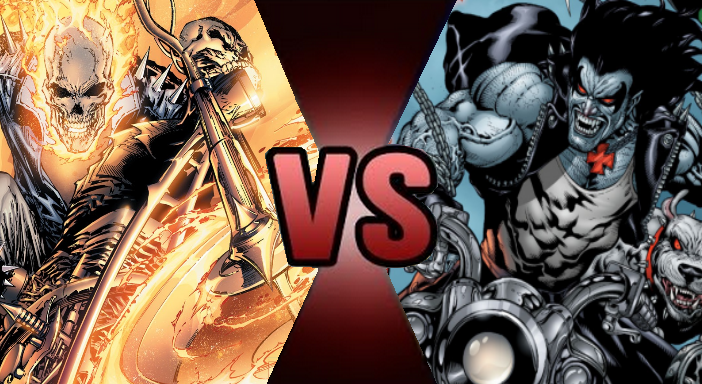 There’s only room for one chain wielding, motorcycle riding Frag Machine and he don’t need no hairpiece!

gets out of character 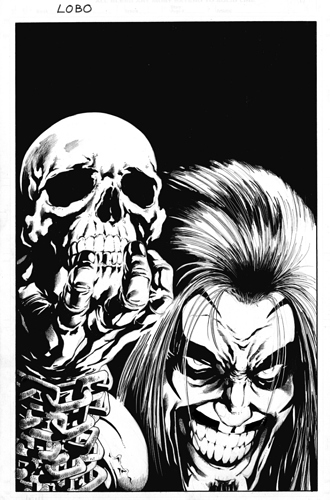 Aren’t both of them literally unkillable, so isn’t it a stalemate in a death battle? I guess theoretically one could trap the other. Neither have teleportation abilities to my knowledge. That’s the closest I can imagine to a long-term incapacitation which I guess would favor Lobo since he’s ungodly strong. On the other hand, I didn’t think Ghost Rider could even be damaged without special spiritually blessed weapons which Lobo doesn’t have.

Whatevs. I’m out of my depth on this one. I’d be interested to hear from someone who knows these characters well.

Somehow managing to actually hurt Lobo only does one thing: Make more Lobos. Dude’s harder to get rid of than Doomsday.

Yeah, I think both are pretty much unkillable so it’s kind of a moot question.

Ghost Rider is as close as Marvel gets to a Spectre type character. So I (begrudgingly) have to give the advantage to him over The Main Man.

Yeah, GR doesn’t have to kill Lobo if he gets him with the penance stare!

@biff_pow What if Lobo wore a helmet made of indestructible, mirrored glass that reflected the Penance Stare back on Mr. Blaze/Ketch?

Or does the PS go through things like that?

My gut says that if Lobo can see GR’s eyes, that’s what counts.

Would his penance stare work on the dude which heaven and hell or any other pantheon doesn’t want him, which in turn makes him immortal?

So if divinity and damnation, as neither want anything to do with lobo, would not acknowledge him so he’d never end up back in their respected realms does it make his deeds become neutral and not sins so the stare wouldn’t work?

I know its kind of a reach but its a discussion forum so id like to hear your guys takes.

Id say still a close fight but Lobo is the main man riding through space for a reason, he’s a real badass. So i take the main man.

Clever argument, EK. Not sure it would work, but I could definitely see a comic book writer putting it in a comic.

I don’t know if the penance stare would work. Lobo takes pleasure from pain and shows no remorse. Legend has it that he destroyed his entire race as a part of his high school science experiment. It goes without saying that he gave himself an A. Yes and he was banned from heaven and hell, so he is virtually immortal. Legend also has it that since he is still technically dead he has been known to leave his body whenever it takes too long to regenerate so he can cause havoc in the spirit realm while in ghost form.

Ghost Rider on the other hand is nigh immortal without weapons forged in heaven that can harm him (although Hulk fans would tell you that WW Hulk could take him).

The Main Man. Regenerating limbs, spacehog will get involved.

According to a marvel wiki the penance stare doesn’t work on a soul with Divine protection. Heaven doesn’t want Lobo around so I’m thinking he might have this protection.

Lobo is as strong as supes and if that hits ghost rider in the face, he gonna feel it.

I vote Lobo, plus after losing a fight to wolverine Lobo wants payback

I think Heaven wanting nothing to do with Lobo would be the opposite of divine protection.