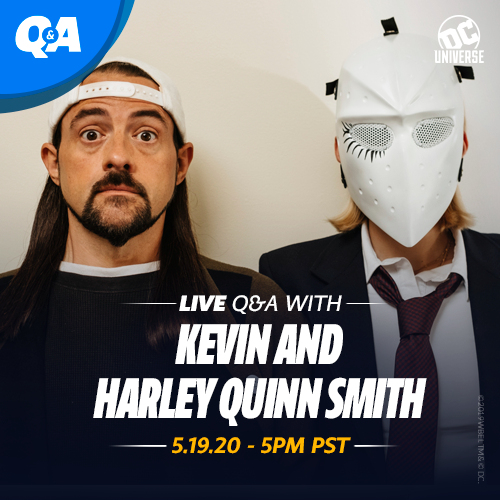 Be sure to catch their recent appearance on DC Daily to check in on the Smiths right in the comfort of their home!

Tuesday, both Kevin and Harley Quinn Smith join us to share in the DC Community love! Take this chance to ask the Smiths about their journey through film, television, comics, and all things DC geekdom. Ask your questions in the comments below, and come back at 5pm PT/8pm ET on Tuesday, May 19th to read their answers LIVE!

Please limit the number of questions for each guest to 1; this way, everyone has a chance to get a response in the limited time we have

Find more from both of the Smiths right here on DC Universe! You can hang out with Harley Quinn every week on DC Daily, and browse the titles by Kevin Smith below:

This should be interesting. With Silent Bob, you never know if you’re getting a quick nod or a long speech. Here’s hoping he brings us some lasagna wisdom tonight. And on top of that, I hope you’re doing well, Kevin. Same to you, Harley.

Okay, here’s the (long-winded lead up to the) question:

Superhero films have a long and rather infamous history of behind-the-scenes clashes between the director and the producers or the studio. Richard Donner’s woes on Superman II are the stuff of legend. Fox gave Josh Trank the “David Fincher on Alien 3” treatment with Fantastic Four. And, of course, there’s the Justice League debacle. At the same time, the MCU has shown the value of a strong creative voice on the studio side, hearkening back to the Old Hollywood model of “Famous Producer Proudly Presents.”

And now the actual question:

In your opinion, Kevin, as the director of the greatest comic book film of all time (the longer cut of Mallrats), how much control should each party have over the final cut?

Howdy Mr. Smith I love your Fatman Beyond podcast and how much you give back to your fans at the show. I love Clerks II, DOGMA, along with Strike Back & Reboot. So glad to see you and Mr. Mewes together again. Y’all’s Whats in the Box Water World and recent Batman one were hilarious.

Have you heard anything from director Matt Reeves on whether his Batman chest symbol was inspired by your story in Detective Comics 1000?

Ms. Smith, congratulation on your growing movie career it must have been so cool to be in a Tarantino Film! Also you have to do the read along with your Dad! Your reactions were too funny!

Thank you, and fingers crossed on getting the green light for Mallrats 2!

Hello Kevin and Harley, it’s such a honor to have you here, in fact you’re the reason I’m here as a member of DC Universe, when I first heard about DC Universe, I had a little interest in it and I thought the price was a bit high. A month later when you were promoting DC Universe, I have to say that you are such a great salesman, you got me interested and I soon join the DC Universe. I can still hear you say,“If you haven’t subscribe to DC Universe, what are you waiting for?!” I’ve now been a member for nearly 2 years and I would like to say Thankyou so much for getting me interested in DC Universe.
My question to you Kevin is, what was it like making a cameo in Daredevil movie? I know it’s a Marvel film, I just love that movie, and your scene was just great!

Hello Kevin, thanks for the q&a. I’m a huge fan and was wondering what dc characters you would like to write that you haven’t done yet?

Hi Harley, what would be your dream job? Thanks for taking the time to do the q&a.

Thank you both very much for taking the time to do this Q&A!

Kevin: Firstly, congratulations on the Chinese Theatre handprints, and “Clerks”’ entry into the National Film Registry. Both honors well-deserved! My question: Marvel and DC. You’ve professed a love for both. You’ve written for both. You had a personal relationship with Stan Lee. You named your daughter after a DC character. Clearly, you’re a big fan of both companies and universes. But: is there one that you prefer over the other, even a little bit? (If there is, please don’t feel pressured to say DC just because you’re on a DC forum; I’m genuinely curious as to the answer.)

Harley: Great performance in “Reboot”! Milly, and her relationship with Jay, was truly the heart and soul of that movie. I hope to see you in more lead roles soon! (Maybe a Milly spin-off, Kevin?) My question: You’ve delved into acting and hosting as your career. But: do you have any desire to write and/or direct your own movies/shows like your father?

Kevin, speaking as a former Clerk, thank you so much for making that movie. I recognized aspects of so many of those characters, it was crazy.

My question is for Harley: outside of DC Daily, what project can we see you in next?

Kevin, if Harley ever decided to direct one day, what would be the most valuable piece of advice you could give her? Harley, would you take that advice?

Sure this is a question you get at least once a year but since this is a DC Community Q&A gotta be asked, what’s the current status of Batman: Bellicosity?

Hello Thanks for stopping by.

These questions are for both of you.

What has been your favorite part about working with DC?

A fun one. Which DC characters would you want to hang out with during quarantine?

Hey Kevin! (And hi again, Harley!) Thanks for stopping by! I’m gonna be the guy who asks this question:

Can you tell us about the time you made Batman confess that he whizzed his pants during the “You’ve dined well” monologue in Batman: Year One?

Upon analysis, I read it as a vehicle of humanizing Bruce, to reconcile the fact that he was probably scared out of his mind when he was just starting out as Batman. He wasn’t always this unflappable badass; he had to build up to that point. Still, it remains one of the most controversial scenes in any Batman story to this day. What was going on behind the scenes? How did you get this idea? Was there any pushback? Do you stand by it? Or would you have done it differently, in hindsight?

Hey Kevin and Harley!
If you could team up to write a DC superhero for one issue, who would you pick?
Thanks for stopping by DCU!

Hello Mr. Smith & Miss Smith
One question I have for Harley is what is her favorite Harley Quinn storyline? Also wanted to say hopefully my wife will be willing to name our first born after a comic character like you did Mr. Smith!
You all take care keep doing what you do!

who is your favorite lantern?

Hi Kevin and Harley!! Would you guys like to see the ArrowVerse do Final Crisis in the future?

Thank you for taking the time to answer our questions on DCU. This is for both of you, who is your favorite female character in the DC Universe and it cannot be someone that one of you share a name of?

Why hello! It’s a genuine surprise to see The Smiths doing a Q&A on the DC Universe app, but I’m certainly not—

Sorry, you know how it is. ‘90s pop band habits die hard. Anyway, all jokes aside, thanks for doing this. My question has to do with Mr. Smith’s Green Arrow run;

What was the most important thing that you wanted to get across to your readers about Oliver Queen in the process of writing it? I guess what I’m trying to go for here is, what was the driving idea that you built the rest of the story around?

Thanks!
And all apologies to both of you, and Mr. Morrissey, of course.

Hi Mr Smith. Thank you for your time! Any chance of you coming back to write Green Arrow comics?