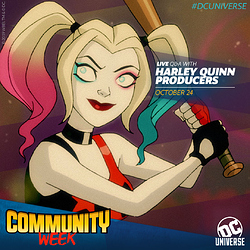 Starting THURSDAY at 10:30am PST, we’ll be hosting a live Q&A with HARLEY QUINN animated series producers Patrick Schumacker and Justin Halpern, whose work you already know from iZOMBIE and POWERLESS! Mr. Schumacker and Mr. Halpern will be joining us LIVE for one hour from their very own verified accounts to answer YOUR questions about what it’s like to interpret Harley for her own show, their approach to gathering a cast of amazing comedians, and answer any other questions you’d like to ask.

Be sure to add your question to the comments below, and come back here at 10:30am PST to find out the answers! 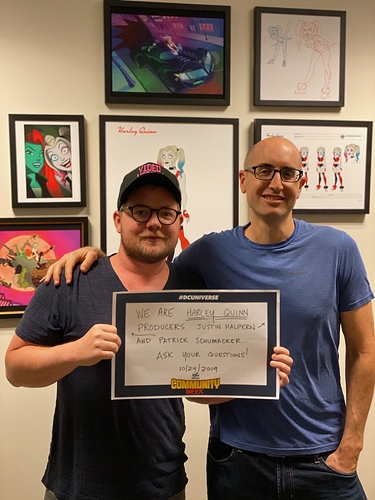 If the Harley Quinn of Batman the Animated Series met your Harley in a cross-dimensional caper, would they get along for the duration or would it all end in a Harley War?

Thank you for taking time out of your busy schedules to chat with us, Patrick and Justin. We really appreciate it and what you are doing for this great character who we all love. I just would like to ask you what specific DC stories featuring Harley Quinn did you refer to in shaping your version of her? I know you probably looked heavily at the Palmiotti/Conner run on the character based on the stylistic stuff, but what else? There’s obviously a wide-range of great sources that you had to look at and consider.

What were three Harley Quinn characteristics from BTAS or the comics that you felt were essential to include in your version of Harley, and what is one thing that might set her apart from versions that we’ve seen before?

I personally would thank you all for this Q/A session. My question:

Most fans know that Poison Ivy and Harley have historically had amazing chemistry and great stories. Can you name three other people you can see her having interesting harmony or disharmony with in the DC Universe?

Piggy-backing sort of off another comment. I know for me Tara Strong is iconic as the voice of Harley Quinn in most animated projects with the character. What was the leading reason(s) for searching for a new voice for HQ for this project and what made Kaley Cuoco the right fit for your vision?

How is Mary Tyler Moore influencing the show? Is Poison Ivy her Rhoda?

Harley Quinn as a character is a ton of different things to different people. This has resulted in a vast array of interpretations that reach far beyond the confines of the current comics continuity into things like Stjepan Sejic’s HARLEEN, Mariko Tamaki and Steve Pugh’s HARLEY QUINN: BREAKING GLASS, and Kami Garcia, Mico Suayan, and Mike Mayhew’s JOKER/HARLEY: CRIMINAL SANITY. And that’s just the comics.

My question: How will the show channel Harley’s elasticity as a character in various genres and takes throughout comics, film, TV and animation (of course).

What made you chose Alan tudyk to voice the joker

Know that Damian Wayne/Robin will be in the series. Is he still the spoiled, arrogant brat we all know and love in the cartoon? Can we expect any other members of the Bat Family to pop up like Nightwing, Batgirl, Alfred, etc.?

Hello and thank you for your guy’s time. You said you wanted to keep harley a villan in another interview. So my question to you is how much of this show will be inspired by the new 52 and how much will be inspired by Batman the animated series? Feel free to lump my answer in with someone elses, i’m sure you guys will get a lot of similer questions lol. And thank you again for your time

Hello and thanks for the chat.

I’ve noticed that there is a great variety in characters starring and providing cameos in the trailers. Was there a special process for selecting which characters would appear and become series mainstays?

This is a really great question. She’s honestly the one choice I would have never expected to voice HQ.

Which of the more obscure DC Comics characters were you most excited to bring into the show?

Does Tim Drake exist in this universe?

What animated series has inspired you and why?

Hello its awesome that you guys take the time for this stuff out of your busy schedules as a fan thank you, my question is Harley Quinn can often have very dark material how do you go about handling the serious material without compromising being to light hearted?