4_20_21_ChristosGage_ReillyBrown_1125x450_Community Header and Twitter1125×450 327 KB
For all about how codes work and more, check out our topic Everything You Need to Know About Batman/Fortnite: Zero Point

Starting 2021-04-20T23:00:00Z we’ll be hosting a LIVE Q&A with Christos Gage and Reilly Brown, the creative team behind BATMAN/FORTNITE: ZERO POINT #1, releasing on DC Universe Infinite that same day! Keep your eye on the Watchtower for updates on how to get these issues with the DLC content in your game.

What was the collaboration with Epic like? Do they play Fortnite themselves? Ask these questions and more in the comments below!

Reilly Brown comes to BATMAN/FORTNITE with apt titles like LOBO and DEADPOOL & CABLE under his belt, and is ready to drop into Fortnite with his pens drawn! Check out his gallery here, and read his take on LOBO (w/ Joëlle Jones) here!

Christos Gage has written from page to screen, including writing for the Emmy-award winning show Daredevil, and a well-known veteran of the comic book industry, writing for characters like Batman and Wonder Woman, as well as some of the most down-and-dirty team-ups like Gen13, Wildcats, Worldstorm.

Please join us in welcoming Christos and Reilly to the DC Community, add your questions in the comments below, then come back 2021-04-20T23:00:00Z to read their answers LIVE!

What are y’all’s thoughts on Pineapple on Pizza???

Why were Batman, Catwoman and Harley chosen for this crossover comic?

Hi, Reilly and Christos! Thanks so much for dropping by and letting us pick your brains for a bit! I’ve got questions for both of you.

REILLY: The New 52 era Lobo redesign to make him into this sleeker, sexier anti-hero was a controversial one at the time, and one even later stories have joked about as the character returned to a more classic, unpolished form. What can you tell us about the behind-the-scenes story motivating Lobo’s makeover, and how it went over?

CHRISTOS: DC has slowly been integrating WildStorm characters back into the DC Universe, with Grifter now appearing regularly in Batman titles, and Apollo and Midnighter generally popping up around DC Pride-related titles. Who else from the WildStorm stable is most due for a comeback, and how could they fit into the modern DCU?

BATMAN/FORTNITE TEAM (ie both of you): The most surprising news to come from this crossover so far is the fight between Batman and… Snake Eyes, from G.I. Joe. I know Fortnite has become in its way a sort of nexus between realities but why G.I. Joe, of all properties? Why Snake Eyes? Were there other IPs or characters on the table, or who you would have really wanted to get?

What made you decide to team up with Fortnite?

From the sneak peaks I saw there is no talking in this comic (again from at least what I’ve seen) and from what I’ve seen in with the Marvel crossover that mostly common for Fortnite, so my question is…

How was it making this comic story with little to no dialogue?

@NYJt3, I think you’re a little misinformed here – DC’s early comic previews are often “art only”, preserving the dialogue so they can show you the pure unlettered pages. In the final product, these pages will almost certainly have lettering.

highly underrated. always get it now, ever since i tried it a month ago. 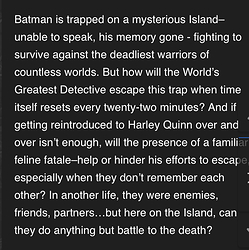 Hello there! While I think the book looks AWESOME from the previews we’ve seen, I gotta say Christos that I really liked your Batman vs. Superman prequel comics, especially the Batman one. My question is:

Are there any other Batman villains than Firefly that haven’t been established as part of the DCEU you thought about putting in the comic. If not, what Batman villain would you most like to see in the DCEU?

Hello gentlemen ty for joining us!!!

I love stories where characters are cast into other worlds. Was there any inspiration from Crisis on Infinite Earths, (or any other major crossover events) or was it mostly game based? Also, ty for releasing these in Italy & the Czech Republic. The 2 places my parents & family hail from.

What are y’all’s thoughts on Pineapple on Pizza???

Well now we have to ask

How did DC acquire the rights to use Snake Eyes when IDW Publishing currently has them, or is this just a one-off type of thing?

What exactly does all this mean for the future of the DC and Fortnite metaverse? We know these changes will impact the Fortnite world, but what about the DCEU?

Hasbro appears to be the one that set the OK. Snake Eyes has appeared as a prominent figure in Fortnite, and Donald Mustard is a fan of the character, so this must have been a special request.

Meh i’m not really a fan

Hi Christos & Reilly, it’s so cool to have you here! I got a chance to read the issue and I can’t wait to read more of it. My question is, how did you approach writing for Fortnite? Did you play a lot before writing? Were you given any limitations that made some decisions for you immediately?

Thank you for your time!

He has thought bubbles in the story, just letting you know in case you haven’t seen it