I’ve really been inspired by you guys and want to make comic books one day. What do you suggest I do to get better at drawing and get more known? How did you start doing comics for dc?

well, the real secret to breaking into comics on the art end is to be amazing at what you do. Comics are one of the hardest mediums to learn since you have to draw just about every single thing and then body language and storytelling. I suggest once you nail this, the comic companies will find you once you post your work online or show it to people at comic conventions. John Timms was found at a signing we did in Costa Rica. He shows his art to us and then became a Harley artist within a month or so. It can happen if you have the chops.

What would it take to win Harley Quinn’s heart? Is it possible for someone without superpowers, or not being a villain, like me to achieve Harley’s affection?

It is simple, have integrity, treat others well and be a really good cook. That girl is food motivated on every single level.

Hello! Loved your responses on the DC Comics Instagram live today. I was wondering if you guys would ever consider or want to do another Power Girl run if ever possible?

We love Powergirl and if they asked us to do a run, we would again in a heartbeat.

First of all thank you for answering all our questions since a lot of us are quarantined. Now on to my question. How easy is it to collaborate with your spouse and what character do you hope to work on together that you haven’t yet?

Great question. Amanda and I love working together and we do have our ups and downs, but mostly this is because we are both very passionate about the work we do. We have learned over the years who does what better and have found a great spot where we share the work load and it comes out to our satisfaction. We both love a challenge so its always interesting and fun.

As far as characters we haven’t worked on yet, I think creating our own would be the next best thing for us to work on together since we have worked on most of the dc characters already, but that all said, we would work on a new Powergirl and Atlee book in a heartbeat.

Are there any Arrowverse shows you would like to write an episode for?

Okay, Jimmy speaking… I met Glenn at comiccon back in the 90’s as we both collected original comic book art. We saw each other each year and became friends over time. It was not till years later that Amanda and I attended one of his concerts and we were blown away. I also did some work for his comic company over the years and we stay in touch. I love the guy. So, yes, when we created Big Tony, we told Chad Hardin to make the character look like Glenn, super cool and street smart and thats where Tony got his look. I still haven’t told Glenn about this yet. lol.

Jimmy: Your run on Jonah Hex with Justin Gray is my all time favorite Western comic. While we’re all cooped up, what’s your recommendation list for western movies that Jonah Hex fans would love?

Amanda: We have GOT to talk about the costume you designed for Cassandra Cain (as featured in the solicits for HARLEY QUINN AND THE BIRDS OF PREY #3)! It’s such an incredible blend of adorability and badassery, which couldn’t be more on brand for Cass. Can you tell us about how this new look came to be?

Hey there, Amanda here! I wanted to harken back a little bit to Cass’ original costume, but without the full coverage face mask, because I really love to draw facial expressions. Harley refers to her as a “creepy little ninja” because Cass can sneak up on you and have you kissin’ concrete before you even know she’s in the room. From what I understand, Cassandra knows just about every martial art form from many different countries, including Japan, so I thought it would be a clever idea to give her costume sort of a “Bat-Ninja” look. That way, I get to draw her facial expressions, even if it’s only the top half of her face. And I really like the black & yellow color combination. You will get to see how she acquires her costume in issue #2!

JIMMY: Go watch ONCE UPON A TIME IN THE WEST and OUTLAW JOSEY WHALES

Hello Harley. I hope the best for you and your new show. I’m an excellent cook especially for egg, cheese, and bacon sandwiches. Also, I use expired cheese just like your fav cook from the movie. Loved you in Suicide Squad and Birds of Prey. Good job on whatever you did to get to write for DC Universe. Excellent advice thus far. Your Jersey accent is also cool. Hope your next film kills it. I’m a fanatic of yours!

Hey Harley and Team Harley! Any plans to get a team up with Power Girl, Huntress and Harley in the near future? BOP was so amazing! I hope more Harley films are in the works for future projects. Also I wish Powergirl was nicer to Harley in the comics lol

I was just kidding! Promise! My own brother’s name is Jimmy!

If you were to create a thread in the Iceberg Lounge-- what would it be?

Hi Amanda and Jimmy! Astounding work on Harley Quinn. The character wouldn’t be anywhere had it not been for you two.

So I ordered a collectors edition of MAD from May 2009 for a nostalgia trip and who’s that artist I see?

That’s one of the funniest sections of the whole book and this is pre-Harley Quinn Amanda Conner. What was it like contributing to MAD? And how would each of you describe your pre-Harley Quinn selves?

Writer/artist power couples are the best, my girlfriend and I mess around with cartoons. Here’s one in progress. 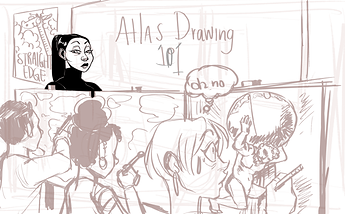 Haha, because Atlases are maps and she drew the titan. First in the “Oh no” series.

Hi there! First of all, awesome cartoon! I love that you guys do that together. Keep it up, we need more cartoons! Secondly, drawing for Mad Magazine was one of my dreams come true. If I remember correctly, a Mad magazine was probably one of the first “comics” I had ever received. I got it from the Tooth Fairy, along with a nickel. It was also a dream come true for my Dad, who had wanted to be a Mad Magazine artist when he was a kid, also. But back in the 1950s, kids were not encouraged to become comic artists. In fact, an artist that my dad really loved was Basil Wolverton, and when my grandma found some of my dad’s drawings where he was imitating Basil Wolverton, she promptly took him to a psychologist.
My pre-Harley self goes back quite a lot of years. Some of the comics I have worked on are Power Girl, a few earlier issues of Birds of Prey, Terra, Vampirella, Tomoe, Soulsearchers and Co., Barbie, Painkiller Jane, the Pro (not for the kids!), Gargoyles, Suburban Jersey Ninja She-Devils, and some other early Marvel titles.

Your father must be a card!

That means so much! Thanks! 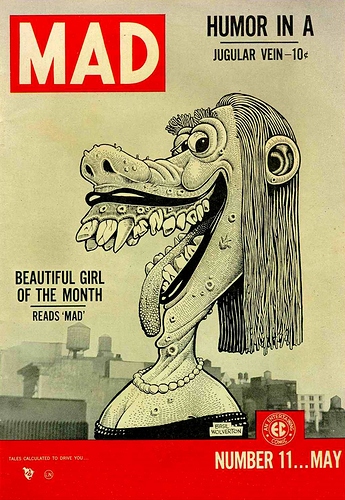 Which one of u is the huge music fan? Especially the 80’s. Was I wrong in assuming a cat with the name tag Devo on its collar was a shout out to that band? 2nd question. Was that cat a real life pet?

Hey! That is, indeed, Devo, our cat. And it is, also indeed, a shout out to the band. We adopted him from our local Humane Society, and his shelter name was “Inky 2”. Jimmy, trying to make a name as a writer after years as an inker, was not having it. Jimmy wanted to call him “Dash”, after the “Incredibles”, "cause he IS really fast, but I was looking for something a little different. We were watching him play with a toy mouse when a Devo song came on, and he was giving that mouse a thrashing to the beat of “Whip It”, and we looked at each other and said, “DEVO!” I told Jimmy I’d had a Deja Vu about the whole incident, and the name stuck. Jimmy still thinks we should’ve named him Dash.

Akron thanks you as well as me.

Popping in to say “Thanks”, @palmio.50081 (AKA Amanda & Jimmy) for your time today!! It was so fun reading all the little easter eggs you sprinkle through your work. Please stay safe and take care!

Ditto. Thank u so much.

Awesome answers
Thanks for coming @palmio.50081