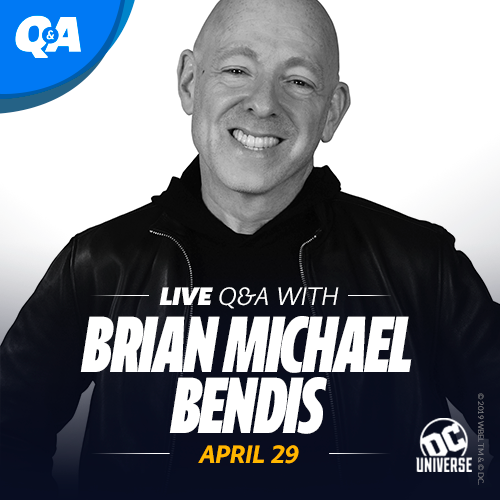 Please try to limit the number of questions asked to 1-2; this way, everyone has a chance to get a response in the limited time we have

Add your questions in the comments below, and come back at 3pm PT/6pm ET on Wednesday, April 29th to read Brian’s answers LIVE! 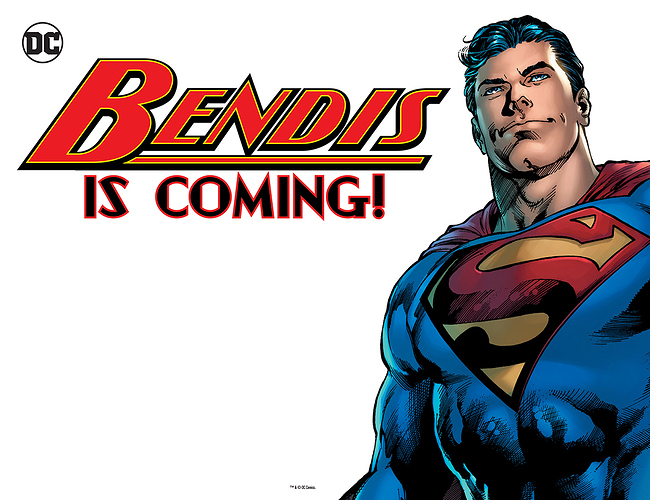 Hello Mr. Bendis! I’m a huge fan of your work going all the way back to AKA Goldfish and Torso. On that topic, my question is: do you ever see yourself drawing comics again?

BENDIS! First of all, I gotta get on my knees and thank you for bringing back my favorite Faceless Boy. The DCU is a better, stranger place with The Question in play. What role can we expect him to play in EVENT LEVIATHAN: CHECKMATE? And do you know if we’ll be catching up with him more in LOIS LANE (or elsewhere)?

I’ve recently finished catching up on Superman (rebirth to now at least what’s currently on DC Universe) and have really enjoyed it. With it being my first time reading some Superman stuff it was great.

So my questions are

I really like Rogal Zar as a villain. Especially enjoyed that quiet scene he had in the fortress when Superman returned to the destroyed fortress again.
What went into making him?(design or writing wise)

And I also noticed a lot of Red Tornado mentioned in action. Weather I dialogue or those opening desk scenes.
Why are there those tornado mentionings?

Wow! Bendis! Wow! So first of all, Ultimate Spider-Man is one of my series ever (I don’t even care that it’s not DC). You’ll have a lot of reading to do for this, so I’ll just move on to my questions

Hi Mr. Bendis. I’d like to start by thanking you for being back the Young Justice and for giving Tim Drake some love. My question is: How did you go about Tim Drake’s reinvention, and was it hard bringing these major changes to such a well-established character?

Hello Mr. Bendis. My question for you is what other characters do you hope to bring forth in Wonder Comics that we as readers will be surprised or curious to know about?

Thank you for answering our questions.

Hi Bendis! My favorite comic you’ve written for DC is Naomi. She is such a new and diverse character, but I have to ask what is currently going on with Naomi 2? Secondly, fans have long theorized that there is more to the Tim/Connor relationship that hasn’t been explored (romatically speaking), what are your thoughts on the duo’s relationship? Also is the drake costume inspired by the duck or the dragon?

I’m such a big fan of Batman Universe, and I really want to say thank you for creating such a fun, “Brave and the Bold” type of adventure that touches on all the corners of the DC pantheon.

My question: When you were getting into the mindset of writing this Batman story, what did you think your Batman would sound like?

Hello Brian Michael Bendis! I was so happy to see you come to write comics for DC! I have thoroughly enjoyed your run on Action Comics and Superman, and I am super excited with what you’ve done with Leviathan.

Will the Checkmate mini have ties to the old Checkmate series? I can’t wait to see Talia, The Question, Green Arrow, and Lois Lane work together! Also, will Renee’s Question still play a role?

Hello,Mr. Bendis. Hope you are well. Really enjoyed your Man of Steel run.
Was wondering if you could write a story/series for a obscure DC character,who would it be?
Have any of your children shown interest in following in your foot steps?
Thank you!

Was there a specific book that made you want to start writing for DC?

And who would you want to work on a creator owned comic that you haven’t already worked with before? Cover was what got me into your writing!

Hey just found out you worked on ultimate Spiderman (thanks @TornadoSoup). That first venom arc was the first comic I ever read. (It was awesome). Haven’t read since I was younger (probably why I didn’t know who wrote it wasn’t really big into reading comics when I was younger but enjoyed this one). And Venom is my favorite character in all comic book genre (sorry DC).

I think they won’t mind if I ask just one more final question. (I know it’s not DC but I think it is okay to ask here)
Why did you decide to give venom this new origin?

Hello Mr. Bendis. I was wondering what the reasoning behind aging up Jon Kent was? Other than for your awesome Legion of Superheroes series. He is one of my favorite characters in Rebirth.
Could we also expect to possibly see anymore Super Sons adventures in the future?

One or two questions only? I will try. First of all I would like to say that I really admire your work. I hadn’t followed your work before DC, but your Superman books made an instant fan out of me. You’ve given Clark a unique voice. When I picture Superman in my head now, I see what you and Ivan Reis created over the past couple years, and it’s fantastic. I especially like the Superman book, with its sprawling events through both time and space. Thank you. Done gushing.

Questions:
1- [Spoiler Alert]
Soooo… Legion of Superheroes… Jon is the “one true Superman”. I will be the first to say that I’m not the biggest fan of the whole “passing the mantle” concept (generally speaking). However, it seems to be coming based on that quote. I must admit that you have been tasteful about it though and I’m kinda/sorta on board. Still I worry that the whole Superman run has been a setup for Jon’s Superman? If Jon is the “true” one, what does that mean for Clark? I guess…just tell me something to ease my concern that Jon’s ascension isn’t coming at the expense of Clark and his place in DC’s history. Please, dear sir

2- Rogol Zaar’s story is still a bit muddy to me. He carried out The Circle’s deadly missions, hates Kryptonians to the extent that he destroyed their planet, yet may be Kryptonian himself? Are we going to be learning more about his beef with Krypton? His story before he became what he is? Is he playing any role in upcoming events?

Please keep up the great work, and thank you for your time

Hi Brian!
Was it your idea to take on both Superman and Action Comics at the same time or was it proposed to you? Just curious about that versus the idea of you doing Action Comics and Detective Comics (for example) instead.

When will see the next wave of Wonder Comics books and announcements?

During your DC Daily interview, I noticed a copy of Elliot S! Maggin’s Last Son of Krypton on the shelf behind you.

Q1: Do you prefer Last Son of Krypton over Mr. Maggin’s other Superman novel, Miracle Monday?

Q2: How has Last Son of Krypton influenced your current work on the Superman mythos?

For the record, those two novels form the cornerstone of everything I’ve ever understood to be true about Superman. They’re very near and dear to my heart, and every time I see a writer even mention them, I just gotta ask.

Long time no see Bendis! Bummed that WonderCon had to be canceled since I was looking forward to seeing you in person and the Wonder Comics announcements. Nevertheless any chance I get to interact with you , even online, is still amazing!

-DC animated movies and TV shows have always been my primer for comics. I was rewatching a Legion of Super Heroes animated series flashback origin episode that featured R.J. Brande like he’s usually portrayed as Durlan frozen in human form as a rich businessman around the same time you introduced the current version of Brande as Chameleon Boy’s mother and President of the United Planets.

Curious how the reinterpretation of R.J. Brande came about?

-How long before we see another superhero crash through that same Metropolis restaurant? 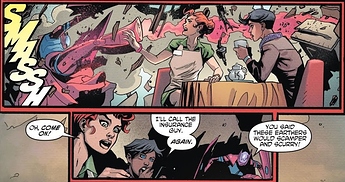 I’m enjoying the Legion series you are writing currently. Is there a decent chance this will continue past 12 issues?