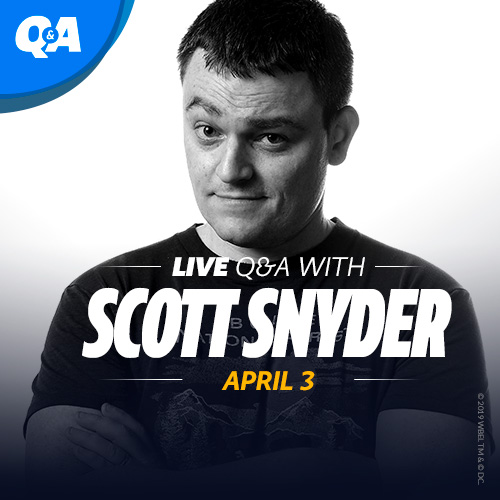 Please try to limit the number of questions asked to 1-2; this way, more people have a chance to get a response in the limited time we have

In some of your Batman works, you have drawn upon obscure, dismissed, or forgotten stories from years past. In doing so, you stand in a long but honorable tradition:

In your particular case, you have revisited characters such as Thomas Wayne Jr. (who was so obscure that he didn’t even make it into Len Wein’s Untold Legend of the Batman) and Uncle Philip (who up to that point had really only existed to explain how Joe Chill’s mother helped to raise Bruce Wayne!). You also put an even more modern spin on the aforementioned Dr. Death.

What attracted you to these characters as you were redefining Batman’s world after Flashpoint? What inspired your new takes on these characters? Are there any other “minor footnotes” that you would like to explore in future stories, Batman-related or otherwise?

What was your favorite part about getting to write the New 52 series?

With many of the Batman stories you have done. What story do you feel brought the best out Batman?

Hello. First, thank you for your work. I was one of the people that the New 52 initiative worked on. I had mostly gotten away from comics when I went to grad school but decided to see what was up with N52 and reading Court of Owls renewed my love for Batman.
You have spoken about how your fears for your children drove Zero Year and other fears influenced other stories, has the current state of the world begun new story ideas or does it need to set in for awhile still? Is writing a story that begins from fear but ends in a positive resolution a cathartic process? Does it assuage the fears?
PS - please force DC Direct to make a B. Rex toy.

Hey Scott! Thanks for stopping by our community!

There’s a question I’ve always had about your Swamp Thing run — what was behind the choice to revert his nature from Moore’s swamp creature with Holland’s memories, back into Wein’s transformed Holland? Were you afraid of the reaction to reversing the course of Alan Moore’s work on the character? How did you approach squaring that particular circle?

For my second question:

As the recent writer of Justice League, do you have your own Snyder cut you would like released?

Also, is there anything you can tease us with regarding the Metal sequel?

What is a character that you would like to write about that you haven’t had the opportunity to cover?

Love the idea of Wonder Woman wielding a chainsaw.
Where did you draw inspiration for the new Metal series?

Hello Mr. Snyder, I am a big fan of your work on Batman and enjoyed your short run on Swamp Thing. I think Black Mirror is the best Batman comic I have ever read and I hope the horror influences the you brought into the character continue to show up in your next few works over the coming years.

Scott I’m a huge fan of your work as both a reader and a writer. You’ve had the chance to collaborate with a number of people from Greg Capullo to Stephen King. I’d love to know who has been the most exciting to work with as a writer, and is there anyone in the industry you’d love to do a project with that you haven’t?

With the Dark Knights in Metal, what was the process in making them? Did you make the back stories seen in the one shots, and which was your favorite?

While it was written to be the “last Batman story,” Last Knight on Earth had a rather open ending. Is it possible to see more stories in that universe?

My question: despite changes and delays, it would appear that DC’s Generations initiative is still in play to some extent (see: the latest issue of Legion of Super-Heroes). Can you tell us (to the best of your ability) how those plans will factor into Death Metal?

Your Swamp Thing run is unrivaled in my opinion. My favorite panel is the embrace of Swamp Thing and Abby (pre-Rot). Was there a creative choice or note that you left for the artist, or was that Yanick Paquette’s choice? Either way, I love that relationship so much. Thank you for giving me some of my favorite stories. 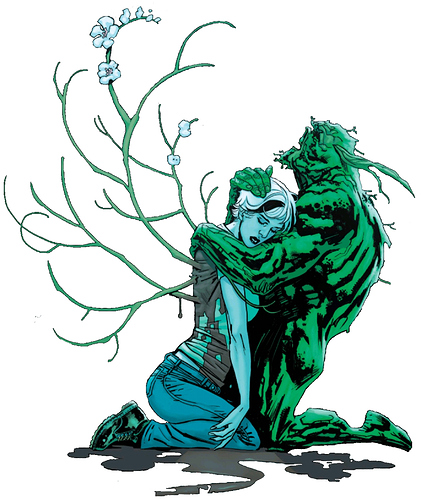 Scott Snyder, when I was getting into comics your New 52 Batman was one of the first three comics I was reading. I heard in some interviews that Fear influence your writing, so I was wondering with your recent Justice League run what was your biggest inspiration behind that since it seems there’s been a strong undercurrent of hope and pushing forward.

Scott,
I really adore the Court of Owls. It is a great concept. Do you have any plans for them in the future?

I love Batman as truly the worlds greatest detective. I’d love to see an arc (even a small one) where it is a “chess game” between the Court of Owls and Batman. Pure detection and deduction on Batman’s part. No combat at all. We certainly saw this with Doyle’s Sherlock Holmes. Stories where he never threw a punch, but purely used his intellect.

Is that a concept you have interest in? An arc where pure deduction is what Batman uses? Leaving it up to GCPD to do the “fighting”. Or merely just the sheer presence of GCPD squads at the right time and place to foil the Courts plan(s). An arc of Batman as pure intellect. Your thoughts?

Any books you’re catching up on, or want to read in-between family fun, work, and random dance parties?

It’s strange hearing about comic book writers you follow and adore, having ordinary/regular jobs before writing full time. I read you used to work at Disney World, any interesting tales when working there or any other interesting jobs you had before becoming a writer at DC comics full time? (Sorry if I worded this weird)

First of all thanks for taking some time off of your busy schedule and answering our questions. My question is how do you want your work to be remembered in the next few years?