Lets Talk About How Amazing "Harleen" Is 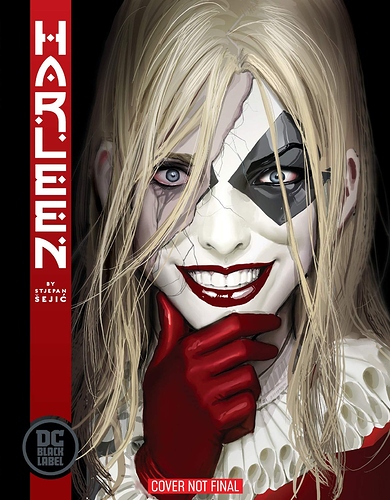 Up until now, Harley Quinn has never stood well on her own as a character. I love the character, she is a highlight of every Suicide Squad comic she is in and her relationship with The Joker can and has been explored in so many fascinating ways. However when it comes to her solo comic series THEY SUCK, nothing but a cheap dead-pool knock off. This is the first time in a Harley Quinn solo series I have cared about whats going on. All that said I what I love about this book.

1: It teaches is us HOW she fell in love with the Joker. Other series tell us When and Why but not How.
2:Its not pointlessly sexual. Really sick of all the perv jokes in her solo series.
3:Uses the black label properly. No pointless nudity (looking at you Batman Damned), cursing feels natural not out of place, violence is violent not shocking.
4:It respects that she is a fallen hero
5:Its just really well written

One question though, Why are we censoring the F word in a black label? Regardless of contexts that is stupid.

I don’t really agree with a lot of what you said but the book itself was amazing.

I wanted to argue that the pointless nudity in Damned was to push limits in Black Label’s first book, but then you pointed out censoring the ‘F’ word in Harleen…so…yeah. Not consistent at all.

DUDE! The art in these books is AMAZING!!!

I’ve always loved Harley and I have to agree that reading her solo series is a real labor of love…it’s good but it’s just not great. So far this book is GREAT!!!

And I love a good Origin Story. I really hope this book helps cement Harley as a solid DC charicter we can take seriously.

Despite what I think of damned I have to agree the art in that book was some of the best in all of dc comics. Likewise the art I. This book is amazing. I’m glad to know I’m not the only one who feels the way I do about her solo series. I absolutely love Harley but “labor of love” is the perfect way to describe reading her comics.

Have you picked up a copy of Joker/Harley yet?

THAT book has Harley as a VERY strong female character!!!

It’s looking like it’ll be a SUPER good Horror Comic to! And I love me some Horror Comics!!!

And I have mixed feelings about Damned.

One thing was for SURE: It needed to be about three issues longer.

I haven’t picked up joker/ Harley yet but if I see it in my local shop I absolutely will. I always love a good Harley and joker story because they do lend themselves to good stories. That being said I’m with you all the way with damned. It was super confusing and there was a little to much narration. I think they wanted to leave it open to interpretation but ended up making it a little bit of a mess.

Yeah…
Damned was like a comic written by Tim Burton.

Not sure how Joker/Harley is going to play out though. Harley is a Forensics Profiler and it’s looking like Joker is going to appear differently than we’ve ever seen him as well.

Book 2 is delayed until December though…so you have pleanty of time to get your jands on Book One. 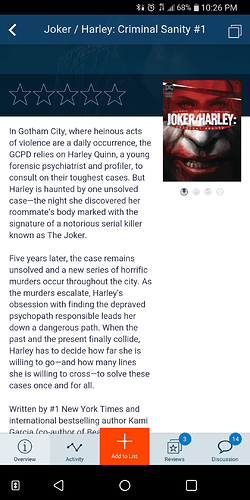 As someone who generally doesn’t like HQ, I was very surprised and pleased at how amazing the book was. The character is usually too flat and cartoonish for me to have anything to latch on to, but this version is believable and interesting.

Not to mention Joker/Harley: Criminal Sanity which is also off to a fantastic start. Hannibal meets Batman? Yes please!

Black Label has just been amazing so far. And it’s starting to make me like HQ, which is no small feat.

I really liked the first issue – the art and everything is gorgeous, but if I were perfectly honest, I think this story does something that not even the original Mad Love really gets right, and shows just how Harleen falls for The Joker.

In the original story, possibly due to it initially being written for an all-ages audience, it seemed so obvious that she was being played. You think, if Batman knew about all the different stories Joker has thrown out in the Asylum, how the hell does a professional psychologist working in the Asylum not realize that?

In Harleen, we see her not buy into that, but we also see why she’s not in the best state she could be in: isolated by her peers due to a scandalous past, horrible insomnia, being pressured by all sides to abandon her crusade to help cure the mentally ill, it’s easy to see how Joker could use all of that to get her to trust him.

Also, I’m hoping that this book succeeds because Sejic has talked about how he wants to do a sister book about the origins of Poison Ivy, and possibly a sequel where the two team up and eventually become a couple.

Also also, I’m also a big fan of her current solo series and all that stuff, so IMO both takes are great and valid.

It was definitely weird that most of the f-bombs were uncensored while a couple were censored. Someone pointed out that those ones might’ve been blocked out because they were in a sexual context, which I guess could be the case, but it’s still pretty flimsy reasoning. I do hope everything will be uncensored in the trade, but regardless of that minor problem, the first issue was phenomenal and I can’t wait for the second this week

That’s true. All the sexual f bombs were the ones that were censored. It’s such a minor problem but it bothers me because the book is so close to wing perfect. It almost seems like the writer was writing it not knowing it was a black label and then they told him halfway through lol

I don’t necessarily agree with you about Harley solo comics, BUT you are so right about the book and the art being great. It’s the first book I’ve read under Black Label, and it inspired me to go out and track down White Knight and Curse, as well as Last Knight on Earth.

White knight is probably in the top 5 best Batman comics off all time. Honestly A absolute must read

All of this was VERY insightful!!!

When are we all meeting back here to talk about Issue Two?

Last Knight on Earth is AMAZING!!!

Well…all Black Lable books have been amazing so far…

Yeah, I’ve enjoyed all the Black Label books so far. At worst, you could say that Frank Miller’s Superman: Year One had some…choices in dialogue, but overall I still thought it was a fun story that got the character of Superman down pat.

Definitely when it drops lol I’ve been a little surprised the overall positive response on this post. I’m always happy to see comic fans get along