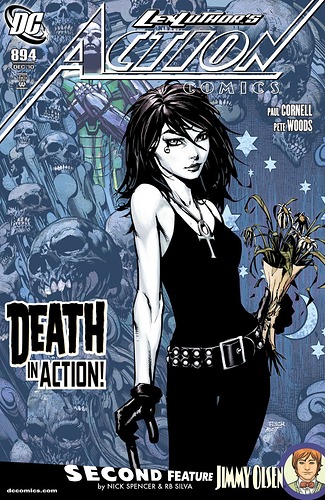 With Netflix’s The Sandman on the horizon, now is an excellent time to look at when characters from Neil Gaiman’s epic have made their way into the DC Universe.

Chief among the Sandman/DCU “pairings” is Death of the Endless (or “Death” for short) and her appearance in Action Comics #894, part 5 of The Black Ring, a masterful fan-favorite epic by writer Paul Cornell and artist Pete Woods (with David Finch on covers) that ran in Action Comics #s 890-900 and saw Lex Luthor as the starring character of Superman’s flagship ongoing title.

I won’t spoil the grandeur of The Black Ring as a whole, or Action #894, but suffice to say, Death and Lex take an illuminating stroll together and its quite the tale.

Have you read this issue of Action Comics? If so, what’d you think of Death and Lex’s Excellent Adventure (apologies to Bill and Ted)?

If you’re a Sandman fan but haven’t read this issue of Action, you certainly should, as its a quirky and fun tale that only Death could be behind.

If you’ve never read anything pertaining to Sandman, but would like to in advance of the TV series, then this issue is most definitely for you. 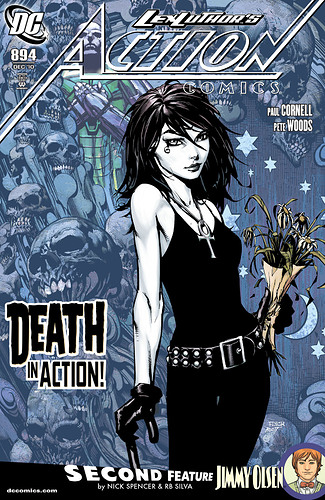 Lex Luthor finds himself literally at Death's door, which leads to a fascinating look not only into the mind of one of the all-time greatest villains, but...

Finally, check out the variant cover of Action Comics #894, by P. Craig Russell: 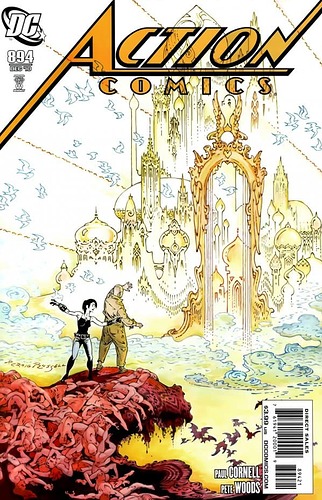 I really liked the issue - Cornell has talked about Gaiman taking a look and doing a few edits on the script, and I think Pete Woods knocks it out of the park (even if the coloring is a bit overly rendered for my taste). I was in grad school when it came out, rereading Sandman for class, and got a chance to show my brand new issue off to the class.

Action #894 is very likely my favorite issue from The Black Ring.

Lex and Death is an out-there idea, but it works so well within the confines of Lex’s adventures in the story and showcases just how versatile and wildly creative Superman stories (especially those that star characters other than The Man of Steel) are.

I was in grad school when it came out

I was 27 and long out of school when Action #894 came out. The employees at my then-comic store couldn’t stop raving about the mag on New Comics Day, and it was at the top of my stack of new books when I sat down to dive into that week’s fresh ink.

got a chance to show my brand new issue off to the class.

What was the reception?

Were people cool and said “Hey comics, those are cool.”, or did you get the close-minded “Neeeeerd!” reaction?

However, the one thing I will ask is, have you read Action Comics #895?

SN: Dream visiting the League sounds very familiar, so I’ll have to look into that. Thanks for the highlight!

Sadly, I have not. My apologies if you meant this thread to be specific to that issue. I had thought it to be about Gaiman’s characters entering the DCU in general.

The thread is specific to Action #895, but if you’d like to highlight other Sandman and DC tales, please feel free, as I’m sure we could all find something that’s new to us.

JLA 22 and 23 for Dream visiting the Justice League. 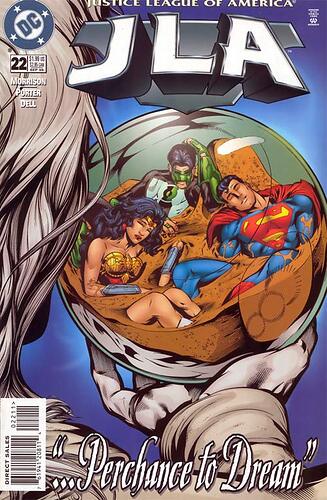 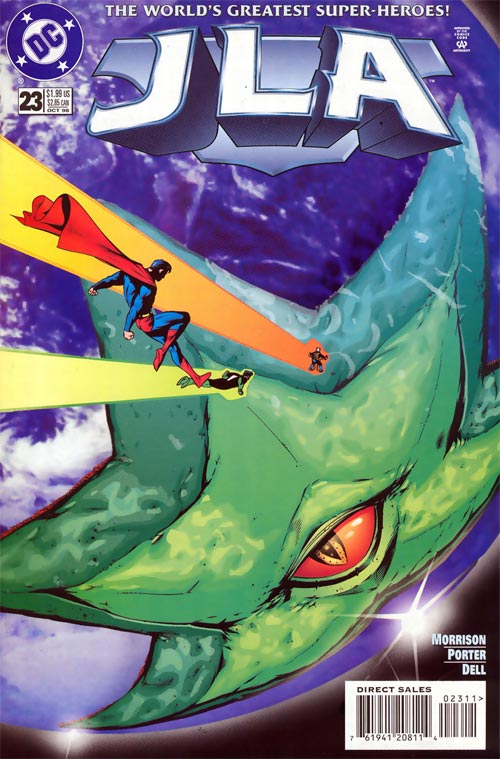 Let me research the exact issue, but I know that Death appearance in the Atom wasn’t ok’d by Neil and is the reason it’s preferred that you run it by him before you use those characters without his blessing. 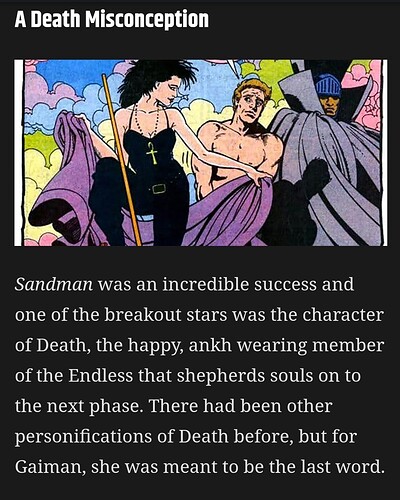 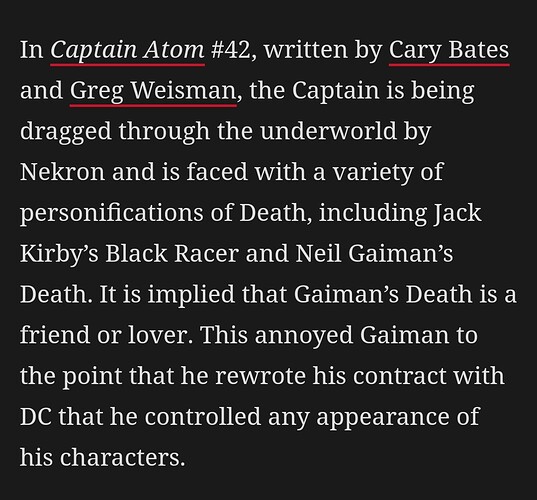 Ah, its from Morrison’s JLA! No wonder its familiar, as that’s my favorite run from my favorite Justice League ongoing. Looks like I need to re-read those issues, and the sooner, the better.

Thanks for highlighting them, good sir.

The employees at my then-comic store couldn’t stop raving about the mag on New Comics Day, and it was at the top of my stack of new books for the week when I sat down to dive into that week’s fresh ink.

I didn’t yet have a pull list - I just walked in a grabbed it. I wouldn’t start pulling comics until 2016 with DC Rebirth, though I did collect almost all of the 2014 Black Widow series by Noto and Edmondson (big fan of that). The n52 kicked me out of comics hard, sadly, for nearly 3 years.

What was the reception?

It was a graphic novel course, so most of them thought it was cool, though not as cool as all the indie stuff our prof had us reading. I, of course, though it was great.

It was a graphic novel course, so most of them thought it was cool, though not as cool as all the indie stuff our prof had us reading. I, of course, though it was great.

Well, at least you didn’t have your nose in the air and were able to recognize grand comic book fiction from the most historically significant comic series there is, so Cool Points to you, good sir!

slides down a burlap bag full of Cool Points

You earned them, Ace.

Score. These cool points will be a great bulwhark when I inevitably give into my Batfamily fandom and disappoint you!

Its a lucky thing you’ve a winning personality…

Hey, I have a huge fandom for Batman, no doubt, but has a Sandman character interacted with Joker the way one did with Lex? Nope!

At least, not that I know of.

Oh, good word! Here, have more of these…

slides down another burlap bag full of Cool Points

With all of the Gothic trappings in the Batman books, you’d think at least one of the Endless would have stopped by: Delirium and Despair going on an inspection tour of Arkham Asylum, Destruction trying to open a gallery, Desire tugging at Harley Quinn’s heartstrings, yet again…

For a second there, I thought this was about the classic story arc, The Death Of Superman. Boy that was huge back in the 90s.
I remember thinking I’ll never see him again in the comic or anywhere else, thankfully there was Lois & Clark: The New Adventures of Superman til he returned in comics.
In my opinion, the 90s was the best decade for DC Comics.

This Death is a wee bit different from the other “Death”, my friend.

@abelundercity.81180 A Desire and Harley tale would be great. Let’s make that happen, DC (please and thanks

Now I’m picturing Desire sitting in on that first session between Dr. Quinzel and the Joker, picturing the merry havoc they’re about to raise with her life.

Wouldn’t that just be a hoot to see in a comic?

I love Sandman more than possibly any other comic. And The Black Ring Saga is one of my favorite stories ever told in Action Comics. And yet… I think Death’s appearance here is the weakest part of the story. It never felt like she actually needed to be there. She doesn’t really deliver anything important, or build on her mythology from Sandman. And it feels to me, at best, like another writer doing their best Death impression, as opposed to Death herself.

As a whole, it just seemed to me like an attempt to cash in on Sandman fans in a story arc that was already good enough on its own not to need it.

I feel that she did a pretty decent job moving Lex along in his journey, though.

As for doing a Death impressions, Cornell mentioned that Gaiman did a dialogue pass, so I assume some pieces are actually Gaiman. I don’t think it’s an essential Sandman collector’s piece, but I found it pretty fun.