Welcome to the first Let’s Read! Let’s do a read-along (could lead into a watch-along)!

In 2015, the DC Universe Original Movie Justice League: Gods and Monsters reimagined the world of DC. I’d like to read the tie-in prequel comics with all of you. We could then follow it up with a watch-along of the animated movie. Let me know days and times you’d be available for a watch-along (if it’s something you’re interested in) in the comments below.

This “Let’s Read” will be covering all 18 digital first prequel comics and will last from July 1st to July 17th.

DISCUSSION QUESTIONS
5) What were your thoughts/feelings on the villain(s)?
6) Who do you believe should be the leader of this League?
7) Are there any scenes you found particularly compelling?
8) Do you want to explore more of this world and this League?

Let’s get to reading 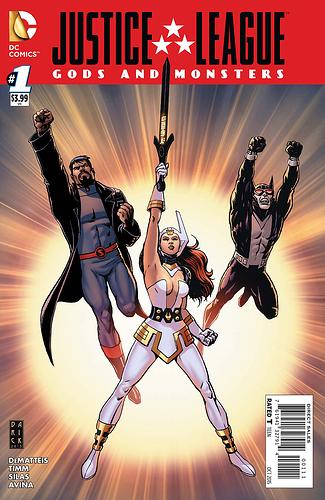 I’m not positive I can join but what you mentioned is an idea I’ve had as well …you could literally do a read along if everybody has a Roku Auto player set at the same time speed.

Yeah, I always thought that would be cool to do, but this is still more of a book club because I wasn’t really sure how we could accomplish it.

You have a good idea though if we all set our auto player to the same speeds it could work. We could also just get on discord and read it out loud.

Hmmm. Let me think about that, wouldn’t that be fun? We can even add the different voices and sound effects like old time radio

It would be easier to pull that off if the comic books had audio options. It’d be hard to comment as you read.

Yes! Haha it could be a live reading/radio serial.

Just finished reading the Batman story and it was really good. Kirk’s origin as the Batman is interesting. His relationship with his parents is sad. Kirk was finally able to make a friend after so many years. I’m not sure Kirk did the right thing in the end. I’m really enjoying this world of Justice League: Gods & Monsters right now.

Of the three, I think I liked Superman’s story and redesign the most. In a way, I am spoiled because i saw the movie before reading this book club’s required reading. As of this post, I finished G&M #3.

With Superman, we don’t know where he came from or how/why his powers. The assumption is that because the word Superman is on the cover of the book must imply his Kryptonian heritage and the near century of stories about living on a world with a yellow sun. And still, an upbringing with a moral code and the value of hard work gives us a man that wants to do good. His brutality is more a reflection of what he endured because at all costs, he must keep his powers hidden. I also liked how he developed a taste for soft beds and “finer things”.

@AntLeon First of all, I LOVE your profile pic of the kitty in a lime(?) helmet.

I have a hard time choosing which redesign and story I like most. They’re all pretty cool, IMO. You make good points about why Superman’s is your favorite. I also have seen the movie before reading the comics, so I do have how they move in animation in the back of my head.

It will be cool to learn more about this Superman. I haven’t started the G&M books yet. Still on Wonder Woman’s story.

I also like this version of Batman. i wasn’t too keen on the art even if it did remind me of the horror and sci-fi comics i used to read. i liked Kirk’s torment about coming to terms with what he has become: a monster that seeks redemption by destroying other monsters.

@AntLeon The art for the Superman book was really good (especially when it came to Superman himself). I did like the Batman art, but it could have been better in parts. Kirk’s torment was really sad to see. Especially when he was finally able to keep his desires at bay because of his new friend, but then that comfort got snatched away from him. I do like that Kirk and Hernan are both pretty complex.

all my reading is now complete, but i cannot comment on G&M 1-9 until tomorrow.

The Superman and Wonder Woman art were similar, or at least compared to Batman’s.

What i liked about Wonder Woman’s story is how she can be “an eye for an eye”, but with kindness/mercy as well as direct confrontation. She gives what she gets. or is that more like karma?

And officially, I will vote no on both a read along and the read aloud. As far as the watch along for the movie, any time on a weekend is best for me since IRL, i am a M-F kind of guy.

To me, the Wonder Woman art was the weakest. The Superman art was definitely better. It would have been great if they would have used more 70’s aesthetics during Bekka’s story.

Weekends work! Do you have a preference for morning or night?

My favorite reimagining of the Trinity was Superman. His story was the most fleshed out, I felt. It was also extremely personal. I could see shades of Clark in Hernan and I could see where and why they were different. I liked that Clark was raised on a farm and Hernan was raised in the fields. Hernan had to hide his powers just like Clark. You also have the iconic moment of Superman saving a plane, but here, Hernan allows the plane to come crashing down. It’s nice that Hernan has a sibling, something Clark didn’t have growing up. The family aspect has always been a big part of Superman’s legacy and it was nice getting to see this Superman’s family.

My favorite design was Bekka. All three of them look cool, but Bekka’s sleek New Genesis garb is just awesome. I also love her sword.
2) Which story did you enjoy the most? Why?

I enjoyed all three stories. It’s a toss up between the Batman and Superman stories. I’d have to say, Batman’s was probably my favorite story. I was completely saddened by the conclusion of that arc. Kirk not having a relationship with his family and seemingly not having any friends was bad enough, but gaining a best friend and then realizing they’re not who you thought they were is bad. I still don’t think Kirk made the right call in the end. Kirk having cancer and curing it, only to end up afflicted with another disease that makes him feed on blood is just horrible. I appreciated the atmosphere this story evoked and how it felt the most “alternate universe” out of the three.

I feel they could. I can see them clashing, but ultimately working well together. It’ll be cool to see those three different personalities come together.

I gotta say, sometimes tie-in comics feel like throwaways that you can skip and not miss out on anything. These three stories surprised me because they were well crafted and well executed. They were important in understanding the characters. Their origins, their motivations, and their place in this “Gods & Monsters” world. It surprised me how personal all three of the stories were. These stories were character driven more than about fighting a villain. I enjoyed that. You have Wonder Woman going through a crisis of morality, Superman trying to find his identity/place in the world, and Batman trying to belong.

For the watch along, i will prefer night, but i am moderately flexible.

My original answer for #3 is shown in G&M proper. specifically, that I want to see what brings them together. This is also mostly spoiled because i saw the movie before reading the preview books. because the biggest surprise is watching them kill people.

Hernan having a sibling did add a nuance that Clark does not. And that his story is told from her POV. her accident being a sort of fatal flaw that power comes with responsibility.

I didn’t understand why Kirk’s parents rejected him.

When it comes to Fourth World stuff, I am a little in the dark. I do like this Wonder Woman (again prob’ly b/c of the movie), but then again, I seem to have a thing for sword wielding Wonder Women.

Yeah, I was shocked by that when I first saw the Justice League: Gods & Monsters Chronicles shorts from Machinima. I actually saw those before the movie, I believe. Bummer that they’re not available to watch anywhere since Machinima shut down.

Absolutely! Hernan was just a kid goofing around. How many times has a kid gotten hurt while playing with their brother or sister. The only problem here is that Hernan has superpowers, which led to something way more severe than just a bump or bruise. It sucks that the incident didn’t make Hernan closer to his family, but kind of made him feel even more disconnected.

I thought Kirk’s parents rejected him for being a pseudo-vampire. His father seemed to already resent him for being a scientist and going down a different path in life. Maybe he felt like Kirk looked down on him? They seemed to be from a small town. Once you add the fact that Kirk staved off his cancer by becoming a “monster” through science, it probably just reinforced the dad’s disapproval. The mom seemed like she just went along with it. That’s how I took it, there wasn’t really more from the few panels/pages we got about it.

LOL, same! I do prefer the movie version the the comic version when it comes to Bekka. I feel like she’s the only one that feels different. Then again, I haven’t finished the G&M’s #1-9 reading, so she could keep going down the path that leads her to becoming the Wonder Woman from the movie.

Kirk: i remember his mom mentioning how he didn’t follow in his father’s footsteps. or take up the family business. becoming a vampire must have been a part of it. i must have missed it because i fly thru comic books when i read them.

Comic book Bekka felt like movie Bekka. when it comes to original flavor Amazon, I do like seeing Wonder Woman armed with a sword and shield. Wonder Woman in Justice League: War is the sort of depiction i’ve been waiting to see. But back to Bekka: I was hoping to see more of her origin in her mini-arc; specifically, something related to what they show in the movie about how she leaves New Genesis.

Watch along: That works for me. For the record, i can go later because my day job is actually nights. Are you going to put it on the calendar?

Maybe I just remember Bekka being more violent in the movie. Granted, I haven’t seen the movie in a long time. I do wish we got more of her origin with Orion and the New Gods, but her story had to tie into the main G&M #1-9, so it was more dedicated to setting up that.