Let’s Talk About Batman: The Doom That Came To Gotham 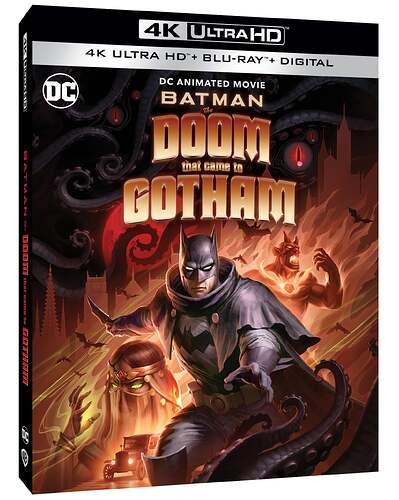 The animated movie looks really good. I will definitely have to sit down and finally read the comic. I have truly failed as both a Batman and a Mike Mignola fan.

Looks pretty slick! I’ll definitely give it a rental.

Looks cool. I’ll probably wait until it comes to HBO

You and me both

Well… I dunno. I will say this, I am going to stay open minded about it, I might rent it when it comes out on streaming, or just wait for it on HBO MAX, I will say this though, DC is relying way way to heavily on Batman, and I get why, DC has just so many characters to pick from it is insane that they do 90% Batman stories maybe I am off, If I am , Kudos for proving me wrong, sadly, I dun care!

But fun thing happened to me at the grocery store today, as i was checking out, i was decked out in my Green Lantern Corps gear, and the kid at the register makes a remark of, I bet I know who your favorite super hero is, and I smirked, an he says,

An I mean I was stunned, that a young kid younger than me by at least 20 years, knew about kiteman.

I only knew about Kiteman from obscure sources like B.A.T.S pretty sure they had a brief kiteman episode. or heck maybe kiteman is in that new dc harley quinn cartoon, i dunno cause i dont watch that.

k i am on my way to getting closer to the i.b.lounge

I’m not really sure about my first impressions of David Giuntoli’s Batman. I think the first 2 lines he says in the trailer are really bad, just sounding wayyyyy too gravely and silly. But he does even out after so maybe it’ll still be an solid performance overall w/ some occasional weak deliveries

Many viewers despised Gotham by Gaslight. I am not surprised it is not a sequel to it.

I don’t think the comic sequel Master of the Future was a strong enough story to make an animated movie of.

. Alway like to see Batman and Magic crossover. Can’t wait.

A Lovecraftian inspired Batman movie with Cassandra Cain!? Signed me the f up!!!

I don’t get into the magical elements of the DC Universe so I’ll pribably check it out when it hits a streaming channel I have. HBOMax isn’t one of them though. So it might be awhile.

So is this stand alone? I havent kept up with the dc movies as much as I would like.

Same. Half-way into the DCAMU I kinda checked out. I wasn’t watching everything religiously and buying it day one. I miss the days of stand alones. There was fun of what will they adapt, how will it differ, who will be in the cast? I am stoked for this though!

Yeah, I prefer stand alone. I like to think that they connect to the timmverse.

And are the newer ones, some of them even in a shared universe? I just wish they kinda drop that.