I have Rewatched Justice League War & Throne of Atlantis let me say watch it back to back! I digress it made me think what if Superman and Lois never got to together. Therefore Superman and Wonder Woman stayed together and had John! My Elseworld question is how would this affect John Kent and his super powers Would be off the chart ! What do you think a wonder super boy ; what’s your thoughts.

I’m not sure. I guess he would be comparable to Lara in The Dark Knight Returns series? Maybe.

@Kon-El that’s what I was thinking too. So something like this already happened in dark knight returns, Wonder Woman, and Superman had 2 children Lara and Jonathan. Lara is pretty much like a regular kryptonian, the only difference is that she was trained like an Amazonian. Jonathan Kent was more powerful of the two. Still a child, Jonathan is able to use neutron vision, which tears through reality, and is is the strongest heat vision we have ever seen. 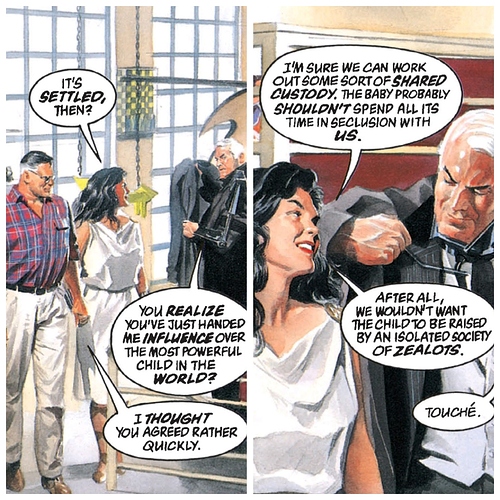 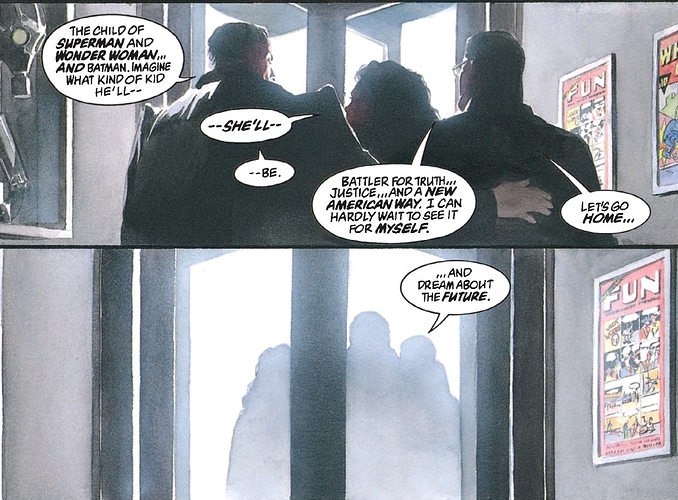 Thanks for the nod! I honestly haven’t made it through either of those movies yet. I keep fallin asleep. I’m familiar enough with the characters to give a little input.

I can’t just pull a totally original idea out of my hat on this one because a lot has been written already. The answer is, though, that there’s a potential for a great story here, based on Black Zero, kind of.
Imagine if Jon is endowed with all Superman’s powers and then some. He’s proficient in combat, because his mother doesn’t want him to rely solely on his powers. Normally I’d like to think he’d inherit powers from both his parents, but in this case, Maybe he could develop a new power or set of powers because of his mixed superhuman gene pool. Anyway, he dwarfs the power of a mere kryptonian. Maybe he blasts kryptonite radiation from his eyes??? Immune to kryptonite? Farts nerve gas? Seriously, something cool and new.

This is gonna turn into a long post. Essentially, what if he grows to become a villain and lays waste to earths heroes and no one can stop him. The interesting twist would be that Superman and wonder woman love him and still have to try to stop him. There’s a lot of potential for great drama. If it’s elseworlds, you can be wreckless with what happens, especially who dies.

Nevermind, I had Mallrats on the brain.

Its hard to say if Jon would be all that more powerful than he is now. Sure, Clark and Diana are powerhouses, but that doesn’t necessarily equate to their full power levels equally syphoning into Jon, as one parent’s DNA may, for varying reasons, make up his genetic makeup moreso than the other.

For all we know, Jon could take on Diana’s Amazonian traits to a substantial degree, while only inheriting Clark’s Kryptonian aspects to an infinitesimal point.

Nifty question @jsmsiggy. Thanks for the shout-out.

Now I want to see them do a story where Jonathan Kent spends a weekend a weekend at Themyscira learning from the Amazons and trying to stay out of trouble.

I’m envisioning a Mallrats-esque number, where instead of Brodie and TS, the story focuses on Damian and Jon.

Damian: “You clowns think you can take on a member of the Al Ghul bloodline?! Come on, I’ll take on all of you!”

@Vroom
Menalippe, the Amazon’s oracle, looks into the future and sees a sailboat making its way to the island.

But no matter how hard he tries, Jason Todd can’t see it. So everyday, he stands on the beach, staring out into the ocean, trying to see this sailboat…

@TheTerribleToyman Jason brings a sack lunch with him so as to have something to eat while trying to see yonder schooner, yes?

“Ain’t no sack lunch like a Themysciran sack lunch!”

I still like this version of Jon that is an overpowered villain. Absolute power corrupts absolutely!

That could be cool too. Overpowered heroes sometimes lose their appeal, while weaker ones can be more interesting.