Most of us are pretty good at dissecting DC media and explaining why we like or dislike a given movie or show, and we tend to do it with much passion.

Let’s flip that on its head.

Pick one of your least favorite DC movies or TV shows, live action or animated, and share one thing you genuinely like about it.

Pick one of your favorite DC movies or TV shows, live action or animated, and share one thing you dislike the most about it.

The more you like or dislike the movie or show the better.

As much as I love The Losers, and I do, I don’t like how much Chris Evans dominates the dialogue.

I have never seen Batman & Robin. Never will see B&R because I abhor Billy D. Williams’ Harvey Dent being replaced with Tommy Lee Jones’ Two Face, but the trailer is amazing.

The Batman. Man have I been vocal about not enjoying this movie. One thing I genuinely liked? ■■■■, this is tougher than I thought

. I’m gonna go with the Lee Bermejo inspired suit design. Could use a little work on that logo and some color contrast, but ultimately I like the intricate armored design.

Batman V Superman: Dawn of Justice - Ultimate Edition (boy that’s a mouthful). The Knightmare scene. While visually cool, I think it doubled down on darkness in a movie that didn’t need it, and was a clunky way to set up what was coming next.

I am a bit embarrassed to say I’m not familiar with The Losers. Have to check this out.

Least favorite is hard for me because I don’t even bother seeing something unless I have an interest in it, so I don’t see a lot of things by default.

Anyway, since Superman is always top of mind…

I guess I’ll say Man of Steel is a least favorite, but something that I genuinely liked about it were the trailers.

The trailers I loved, the movie I felt should have been bigger in scope though. And Henry Cavill was too short to me. The trailers were something that I genuinely liked though.

The Joker I liked and that movie was basically flawless, so yeah.

The Batman I liked, but yeah, I think many (maybe even most) will agree, whether they liked it not, that that third act was bad… or could have been better or whatever.

I really enjoyed the movie up until then, and I guess in all fairness, action-oriented movies usually do kind of fall apart for me in the third act. Because I guess they feel that they have to go out with a bang or something. And… it’s kind of hard to land the ending with me in a lot of cases; and that applies to all movies too, I guess.

But very few “action” movies regardless of genre stick the landing with me. And The Batman was no exception to that.

The Joker stuck the landing to me, The Batman missed it kind of bad though, in my opinon.

Hopefully in the next The Batman movie Matt Reeves and company stick the landing better; meaning do something that I like.

It’s a movie that came out a few years back, starring the likes of Chris Evans, Idris Elba, Zoe Saldana, and Jeffrey Dean Morgan. I’m pretty sure the movie’s still on HBO Max, and the comic it’s based on are on DCUI. 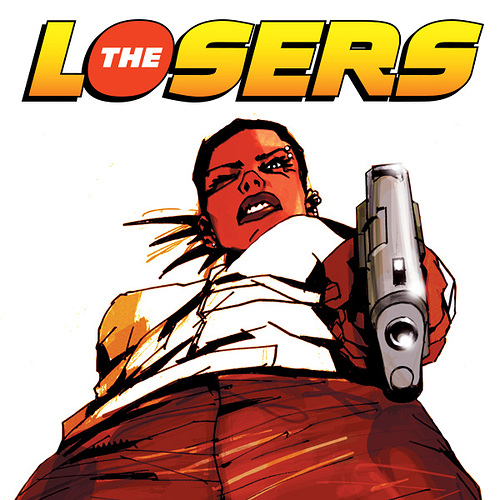 The series that inspired the high-octane Warner Bros. Pictures movie The Losers! Formerly an elite U.S. Special Forces unit, The Losers stumbled upon a dirty...

My least favorite would be Jonah Hex. It’s just not a very good movie. One thing I do like about it is that Josh Brolin was perfect for the role.

It’s hard for me to pick an absolute favorite, but Stargirl would be up there. The one thing I have never liked about it is that they entirely skipped Jack Knight as having had the mantle “Starman.” It goes straight from Sylvester (who never was actually Starman in the comics–he called himself “Skyman”) to Courtney. As a big fan of Jack, that always disappointed me.

but the trailer is amazing.

The trailers were something that I genuinely liked though.

You guys found a loophole

C’mon… something you liked about the actual movie (or show). I think we can all come up with plenty of examples where a movie didn’t live up to its trailer for us

The Joker I liked and that movie was basically flawless, so yeah.

I appreciate your love for the movie, but the whole point here is to not do that. I challenge you to name one thing you didn’t like. It’s ok, everyone will still understand that it’s a favorite of yours

The Batman I liked, but yeah, I think many (maybe even most) will agree, whether they liked it not, that that third act was bad… or could have been better or whatever.

Oddly enough, I thought this was better than the rest of the movie. As a good friend of mine used to say “It takes more than one person to make the world”.

The one thing I have never liked about it is that they entirely skipped Jack Knight as having had the mantle “Starman.” It goes straight from Sylvester (who never was actually Starman in the comics–he called himself “Skyman”) to Courtney.

Next to learning about The Losers (thank you @Jay_Kay), this is another new thing I learned today!

I strongly disliked the Joker movie for a number of reasons, but i do enjoy how visually stunning the movie is. it’s fun to watch, just because of how vibrant and like, pretty it is to look at.
i absolutely adore and practically worship the Lego Batman movie, but I do strongly dislike the whole Bruce-crushing-on-Barbara part.

Oddly enough, I thought this was better than the rest of the movie. As a good friend of mine used to say “It takes more than one person to make the world”.

The thing with Batman though, I don’t feel he should be put in the position of having to save people from a flooded arena or whatever.

That’s too big for him, I feel, I can’t suspend my disbelief in a situation like that. That’s why it fell flat for me. Everything else in the movie I could buy, but that I couldn’t. The movie went from grounded for the most part to something like that.

Now, that is a job Superman. I could easily buy him doing something like that, because obviously he’s Superman, but Batman I can’t buy doing that – I though it was too super-heroic.

And yeah, the Joker thing was a joke. And I guess maybe to set up as a contrast to The Batman and what I felt was it’s shortcoming.

And with that ending, I probably would have given The Batman a 9, but that ending ends up with me giving it an 8. Still better than any other super-hero movie that I’ve ever seen, but it could have been even better but for…

If I were to pick something for the Joker, and this is really kind of a cop out (and I’m really reaching here), but it maybe could have been a few minutes longer – just to show what happens next. But it looks as though we’re going to ultimately get what happened next in the next movie, so…

Brando’s acting sucked so bad. Good thing Stamp was there to save the opening scene.

Nolan’s me films have a very calming score. When I need to sleep Batman Begins is useful for that.

The Killing Joke was a great way for Hamill to show off his angelic singing voice.

Myself The Dark Knight Returns Part 1 has parts where they linger the animation too much to resemble comic panels and some odd parts where they just talk out loud to adapt the internal monologues.

Injustice is not the worst movie ever.

Myself Vs. Robin has some good acting (but not by me).

Injustice is not the worst movie ever.

I agree. I actually quite liked it, only to be surprised by the negative posts online after.

Wonder Woman 1984 is the worst superhero movie I’ve ever seen but I do think Pedro Pascal did a good job as his character,

The Batman on the other hand is the best superhero movie I’ve ever seen and it’s my second or third favorite movie of all time but I do think Alfred was a bit underused.

Pedro Pascal did a good job as his character

He was a scene stealer in that movie for sure.

Favorite:
Superman The Movie. As far as movies go, this one deserves to be on its own pedestal. It does take a very long time to actually get to Superman though. I can do without the whole Otis walking to Lex’s lair sequence.

Least Favorite:
Naomi. Didn’t like this show, but I did enjoy seeing the main character’s love for Superman in the early episodes.

Least favorite movie : Batman v Superman
Cool moment : The rooftop scene with Superman & Luthor (Eisenberg’s mannerisms almost ruin it for me but still cool circumstance to show someone w/o godlike power have power over Superman)

Pick one of your least favorite DC movies or TV shows, live action or animated, and share one thing you genuinely like about it.

STAS: Lois Lane. She’s a really great take on the character, which is something that I am less likely to say about some of the other characters.

Pick one of your favorite DC movies or TV shows, live action or animated, and share one thing you dislike the most about it.

Batman '89: the third act. It all becomes a little messy. I like the individual parts of it, but it really does feel like they were making it up as they went along. (But at least it doesn’t end with rocket-launching penguins.)