Let’s Check In On Each Other & Recommend A Book

Hey @TravisMorgan thanks for the tag. I’m hanging in there. I have just finished my final for my political science class. I have my developmental psychology final to go and the semester is over. I hope you’re doing well.

Thanks for the reading suggestion. This is the third time Planetary has been brought to my attention in the last 24 hours. It has just shot up my list. I can’t wait to read something other than text books and political journals.

I am going to recommend Justice League Dark Vol 2 #1. I’ll tag @Applejack and @AnonymousHQ and @GLCSector3295 and @Wildstorm-Jeff

This thread reminds me of popcorn reading. It’s almost exactly like that, except comic recommendation instead of passage reading and discussing our days.

Wow I know I started this and all it just amazes me the people here are so awesome.

I’ve been hanging in there. In all honesty the last three weeks have been a bit tough for a couple of reasons. I’ve mentioned a couple of times on various threads that our family dog passed about three weeks ago now. That got me in kind of a funk for a good week and a half, and I ended up falling behind in a whole bunch of school work. Now I’ve been frantically trying to catch up. I’ve been a bit stressed lately, but more-so because I feel as though there’s been a lack of incentives encouraging me to do work than the actual volume of work. I also have 4 AP tests that are coming up in a couple of weeks that I haven’t started studying for yet because I’ve been behind on work.

I think it’s all stuff that I’ve just got to work through though. There’s no one thing that is causing me stress on it’s own, it’s just the combination of a bunch of little things that are daunting. I’ve just been taking it one day at a time.

For comic recommendations I’ve got a few that I’ve gotten into lately. I just read Mr. Miracle for the first time and really enjoyed it. It’s surely the best of Tom King’s writing that I’ve read so far. The other one that I read recently and really fell in love with was Descender. It’s an Image title, but it has beautiful watercolor artwork by Dustin Nguyen, and fantastic character writing and world building by Jeff Lemire.

I’ll reach out to @NYJt3, @AquamonC137, and @Awesome_Squid to check in with how you guys are doing

For suggested reading I’m not really sure. Just finished white knight that was good. Currently reading Wonder Woman’s Rebirth run from the apart of my rebirth catch up reads. That been very fun to read.

As for how I’m doing. I’m doing pretty good. Finals are going smoothly. Grades are looking good. Was able to video chat with some friends from college that I haven’t seen since before we all left for spring break in mid April so that was fun. Besides that just enjoying each day big or small as they go on.

thanks @ralphsix, and @jsmsiggy for the thread! today’s been an upswing for me. feeling better, and my body finally remembered how sleeping works!

update: i watched almost that whole video without crying

@biff_pow I have been summoned again. You can also use my summoning thread to reach me. Read Naomi

@YoYoFroYo
Hey! Thank you for the Tag! Sorry to hear about your dog man thats horrible. With the school work, I know that stuff can seem really daunting, but with 4 AP classes there’s a smart head on those shoulders. You got this, lay on the heat and melt that snowball! I agree with you on Mr. M being Kings best work. Did you get around to reading his Adam Strange? I bought the first one and wish I hadn’t. I just can’t take his dialogue, it just comes off so fake and cheesy to me. Thats just me thought. While you’re dipping into Image, Please check out Seven to Eternity when you get the chance. I think you’ll really dig the art and the world building and story is fantastic! Issue 1 first print is the only CGC 9.8 I have. It’s my baby.

All is well over here thanks. Had a family member in the hospital (not COVID-19) They are recovering but still scary. I imagine where I am is similar to many: a lot of places shut down, bare shelves, no Comics. All is well in the long run though thankfully. Today was last day of finals 16 credits, all A’s and B’s, ok fine one C (I can feel your look)

I summon @moro the collector!

and @nu52 the destroyer!

Hope y’all and your loved ones are safe and healthy.

I will definitely check our Seven to Eternity. I’ve been starting to branch out to Image recently and have had great experiences so far. I absolutely adored Saga, and Descender (and I’m just totally blanking on one more short series I read). I’m working through East of West and Low right now, and have a whole slew of Image comics lined up. I’m taking any and all Image suggestions right now

Hey there @AquamonC137. Thanks for checking in, man

. Ever since this whole covid thing started, I’ve kind of organically taken a step back a bit from the forums. Been working from home for almost 2 months now. Between that, homeschooling and now fasting for Ramadan, I find I have little energy to keep up my presence here. Hoping I will hit the ground running at some point and catch up with the DCU community.

Things have been quiet for me on the collecting front. Payments have started going out for the Sideshow 1/12 scale Superman. Think he’s due sometime this summer, with Wondy following shortly after. Other than that, only one piece has caught my eye, due later this year; see link at the bottom.

Sorry to hear about your family member and wish him/her a speedy recovery. Wish everyone here at DCU stability and good health during these difficult times. 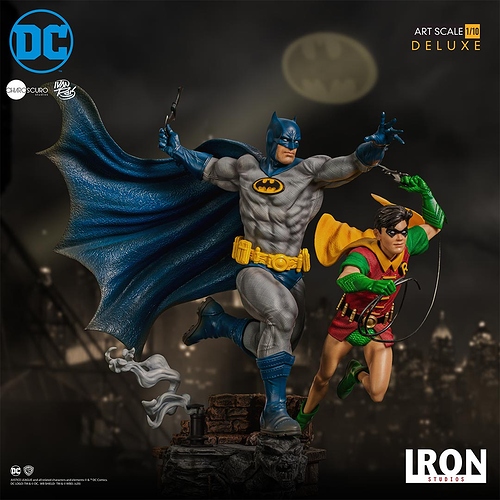 Pre-orders are now live for an upcoming DC Comics - Batman and Robin Deluxe 1/10 Scale Statue. The upcoming Iron Studios statue is based on artwork from DC Comics artist Ivan Reis. The Dynamic duo features their classic outfits. The statue stands...

Oh! I’m on Vol. 4 of Low right now! It’s about to wrap up too, with the last bit coming out really soon. 7 to eternity is by Rick Remender as well.

Tagged, woo! Thanks for the tag @TheQuestion101, I’m doing alright, and I’ll definitely check that out! I’ve been meaning to get around to reading it, but I’ve been reading other things. (Not dc things…I’m working back into marvel, but only for Marvel Zombies)

Glad to hear buddy! Yeah I figured with schools closed you had your hands full. I know what you mean with work and school I had been fairly absent on the forums these last few months as well. The texture on the suit and cape look great! I actually have added a few little items myself. will get some pics on your page soon. Stay safe man and give me your SideShow Superman with the Kandor and Starro! throwing in this to sweeten the deal

Recommended read… Superman: Grounded. A recent read that I found to be a refreshing change of pace, with great art to boot.

Thanks for the tag @TheQuestion101 I enjoy your left turn post in the middle of the night. I’m doing alright, the community here in the forums is a lifesaver.

I’m going to recommend Global Frequency only 12 issues can be read in any order. Warren Ellis is beyond underrated in my book. For the bold check out the Global Frequency pilot on the internet’s.

Let me get a bit more of the good people around here, @DC89 and @BatJamags

I forgot to make a recommendation! AMBUSH BUG.

No. 1 Batgirl stan is here and is on the case @Wildstorm-Jeff. Aww- very nice of you to call me one of the good people. Much appreciated sir. U Rock!

I will indeed drill down into Ellis’ work in Global Frequency. Thx so much for the recommendation and I’m looking forward to the reading.

Alrighty then, I’ma check in with two super cool fellow DC History Club enthusiasts @TurokSonOfStone1950 and @msgtv and my reading recco for them both is my most fave Golden Age era BMan two-parter Batman Versus the Vampire (Detective Comics #31 and #32). In this utterly engaging story told by Gardner Fox and hauntingly illustrated by Bob Kane and Sheldon Moldoff readers are presented with the truest essence of The Batman during his early days as a shadowy visage of vengeance and how he deals with supernatural forces for the first time in his crime-busting career. Matt Wagner’s 2006 revisitation of this material is a fantastic read in and of itself but truly nothing can compare with the original 1939 storyline, Just. sooo. good. 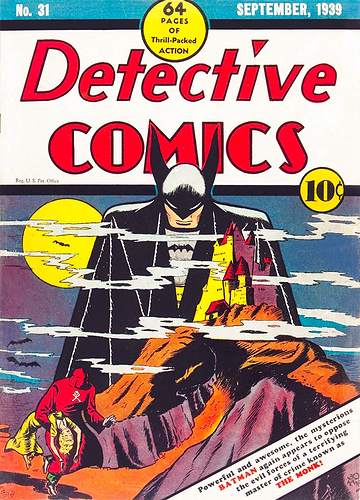 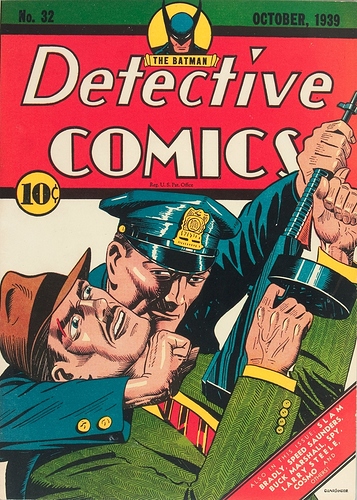 Oh, and BTW- this bit of probably well-known trivia kinda’-sorta’ connects to your cool post Vicki Vale: A Fun Comprehensive History in regards to K. Basinger’s V. Vale performance @Wildstorm-Jeff. Anyhoo, as readers of this Bat-Tale will see that while Bruce Wayne’s fiancee Julie Madison plays a key role within the B V MMonk storyline she would also go on to be brought to life on the big screen in 1997 by then top supermodel Elle Macpherson in Batman And Robin, sans any vampire activity in the movie of course 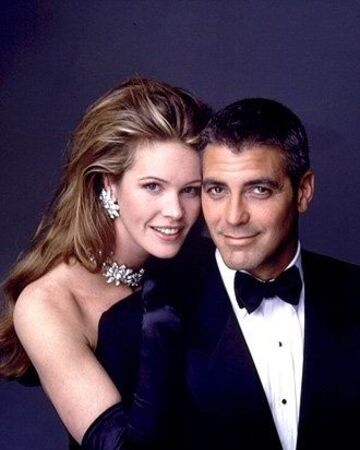