Why a smaller quantity of material this week? The reasons are two fold:

These tomes have it all: the Legion, Doom Patrol, (they’re pretty popular around these parts it seems), other Legion oriented characters, time bubbles, oodles of fun, etc.

This fantastic, four color fiction is brought to lucid life via the tremendous talents of J. Michael Straczynski and Jesus Saiz.

Now, lets cut to the brass tacks: I bet you want to know what this “bonus” jazz from the thread title is, don’t ya? Well, I appreciate the interest and I’m here to say the bonus for this Wednesday is:

Superman Plus Legion of Super-Heroes!

This was part of the various Plus one-shots from the mid-90’s. It’s a nifty one-off. Superman added to the Legion is the comic equivalent of chocolate being added to milk. Plus the Legion owes their existence to Superman (or Superboy, depending on the continuity), so there you go.

Bonus Question: You’re offered the Kryptonian warsuit seen in Superman Plus LOSH. Do you accept this gift from Krypton’s past or do you say “Thanks, but no thanks.” ?

Discussion on these books starts immediately and will run until next Wednesday, June 12th.

Sidenote: a final reminder that the next Legion of Super-Heroes Watch-Along is tonight. Please see the corresponding thread by Don-El to determine the showtime that is appropriate to your time zone. 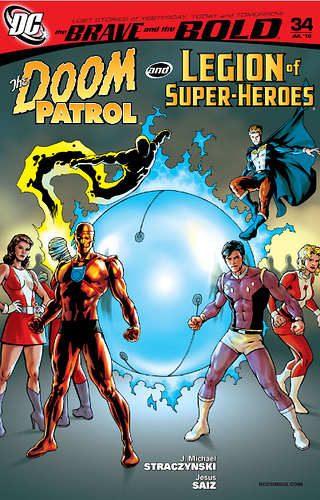 Neat selection! Due to the shortness of it, I kinda already read the main issues. Really fun stuff! As for the questions:

“1. Our main content was written by the illustrious J. Michael Straczynski, a noted writer in the film, TV and comic book arenas. Is this your first time reading his comic work?”

Not at all! When I was starting to get into comics, my first real exposure to Spider-Man in comics was JMS’ run and really enjoyed those…well, before it got really pear-shaped with the likes of shudder Sins Past, Civil War and convulses One More Day.

I’ve also read his Superman: Earth One graphic novels, which I really liked, especially the first volume, which had a really neat hook on exploring young Clark’s journey t o being Superman where he considers using his powers in an actual job that could help people but also make him and his parents set for life, and how he chooses to become Superman instead.

i’ve also read through his regular runs on Wonder Woman and Superman while he was still on them. His Wonder Woman was an interesting “what-if” situation that was pretty compelling. His Superman was a little more awkward, but I appreciated what he was trying to do with it.

Finally, I’ve read a fair amount of his other issues in Brave & The Bold. I have to say, if you liked these two issues, you definitely have to give his whole run a shot – each issue is a similarly well done team-up. My favorites are the Aquaman/Etrigan story where they team up on Halloween to stop Cthuluhu from invading Earth, and Wonder Woman/Zatanna/Batgirl, where the three girls have a great night on the town before tragedy strikes.

“2. How did you like the iteration of the Doom Patrol in this week’s pick?”

They’re pretty cool – I haven’t really read any silver age DP (I plan to get into that once I finish going through the Morrison run) but it’s interesting how while they’re a little shinier/less explicit, they still feel real. Like, I could hear Branden Fraiser as Robotman in this story.

“3. Which team of costumed misfits do you see yourself a part of: The Inferior Five or The Legion of Substitute Heroes?”

From looking up the Inferior Five on wikipedia, I think the big difference between the two teams is that the Subs are more normal people who have problems but aspire to be better, whereas the Inferior Five are born from greatness, try to be better, but constantly fail. I think I’m going to be more positive to myself (for once) and say the Subs – because they may be screw-ups, but they mean well, and some of them eventually do improve on themselves so much they can make it to the big leagues.

The Watch a Long was lots of fun last night, thanks to all who joined! I’ll work on reading the first of these comic book gems tonight!

just read the Doom patrol legion team up lots of fun the artwork was great I had forgotten about that particular artist back in the mid-2000s.

The dialogue in humor were excellent.

The actual plot and story were a little thin but that’s okay we got to see our favorite characters together and well drawn.

I loves me some JMS! His work on The Amazing Spider-Man is my favorite run on that series (minus the end of One More Day, but that’s Quesada’s fault, not JMS).

His work at DC is also quite enjoyable. I’d love to see him on a new ongoing if his schedule/interest allows. Rumor had it in 2015 that he was working on new Earth One books, but those projects are on the backburner it seems.

Vroom, agreed on the Babylon 5 creator, he’s a writer I follow; I even liked his Superman walks humbly through America series.

Okay, so I just finished the Superman Plus Legion story. It was alright. It kind of felt like a one-off side story in the middle of the bigger story of the Legion stuck on modern-day Earth, which is interesting, but I was sitting there thinking “I would much rather read how they got here than them…making holograms real? I think?” The plot in this was kind of nonsensical for me. There was some interesting character stuff, like Brainiac 5 just being his usual uber-smart douche-y self, and the interactions between Cosmic Boy and Saturn Girl (which I didn’t know was a thing in the reboot) and the whole thing with Phantom Girl/Apperation. Now for the question.

“Bonus Question: You’re offered the Kryptonian warsuit seen in Superman Plus LOSH. Do you accept this gift from Krypton’s past or do you say “Thanks, but no thanks.” ?”

I mean, talk about the ultimate deterrent against home invasion or robbery! I would be concerned about people coming in to steal that, though. But perhaps the most important issue – where the hell would I put it? My house is super small, it would not fit! So, perhaps for that reason alone, I would have to decline.

To answer my own questions:

I’ve always read good things about his Rising Stars comic from Top Cow, but I’ve yet to read it.

Bonus Question: Oh baby, I’ll take the Kryptonian Warsuit! I hope it gets good mileage too.

Thanks for the responses so far kids =)

Frankly having fun over here in the Comics section while all the rest of what’s going on here is happening on the rest of the site kind of feels like we’re kids playing in a basement in Britain during a bombing in world war II.

That caveat being said, I plan to continue to work on this reading fun either later today or as usual I’ll finish on Monday and Tuesday (assuming the community isn’t closed down for a few days like a bar that had rioting)… Thanks again for coming up with this reading, Vroom!

You’re welcome DE. Thanks to you for originating the Legion BC.

Okay the plan tonight is to read the next issue and then tomorrow night finish it up, looking forward to it!

I do want to have a few words about how the Legion watch a long went later too, some really fun things came up!!!

Brave and the Bold #35: Legion of Substitute Heroes with the Inferior Five!!

Ingenious teamup. Very entertaining prank turned bad then good kind of story. The better characterization was of the Substitute Legion, but the ending gave at least a small small chance to have these Inferior folks appear again in the DC comics.

Also nice how the two stories intertwined, last issue and this! 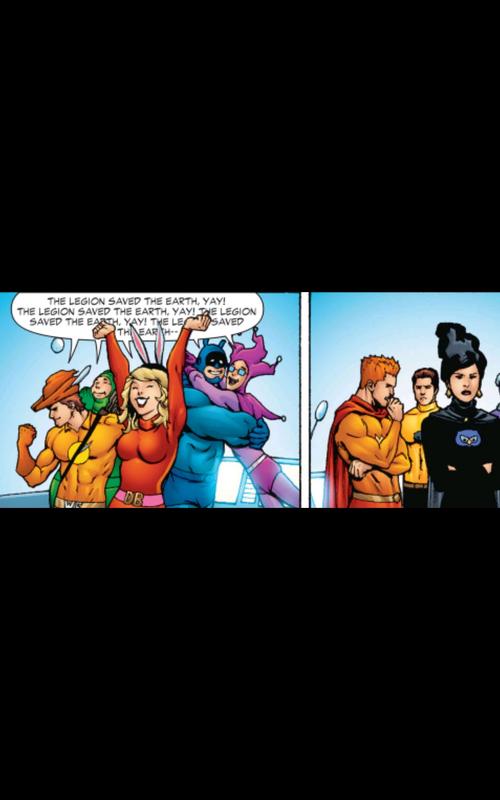 While I’m here in the Legion Post (get it, “Legion Post?” hahahahaha), some summations of last Wednesday night’s Watch a Long:

The first episode we watched (#3) featured a rich girl named “Lexa” with red hair who really jells with Superboy. Guess where that story went? Guess Guess!!!

So other than her turning into a supervillain who lost her red hair becauase of Superboy (what is it with this guy???), she also had a super robot butler named…Wodehouse. Ring any bells with anyone? P G
Wodehouse wrote the delightfully funny Bertie and Jeeves laugh romps, featuring a dim witted English “gentleman” and his super smart butler Jeeves, who would get his “young master” out of jams usually of the romantic kind.

The nezt episode was a dreamworld kind of nightmare thing that would have done the Doom Patrol series justice, right down to “nothing is real” and “we are trapped in a painting, help”…but this came out around 2007.

I highly enjoyed all three issues if last week’s pick. pats self on back

Thanks for your expert analysis DE =)

I’m going to go for the extra credit tonight maybe

@DE Reach for the stars and get that extra credit like a Legionnaire gets their first Flight Ring!

You can do it!

@Don-El I get what you mean about the whole craziness outside of everywhere else on the forums. I would describe it more like this.