Up and at them Legionnaires! Its a new Wednesday, a New Comic Day and that also means a new Legion of Super-Heroes Book Club entry to slake our thirsts for 31st century action packed adventure into the next week!

Legion: Secret Origin! Written by legendary Legion scribe Paul Levitz and masterfully drawn by Chris Batista, this triumvirate of a tale showcases R.J. Brande’s efforts to bring forth a team of champions who will become…Legion.

The adventure runs until next Wednesday, so get your Flight Ring on and get it to it! Long live the Legion! 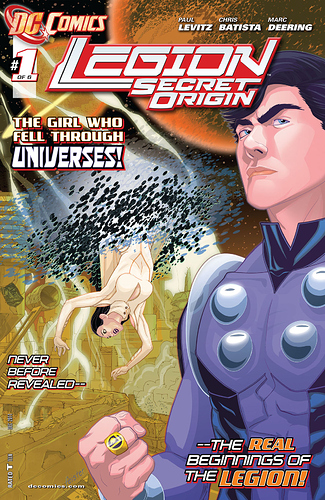 Oh here’s a link that tells you for free how to measure your finger that you want to get your Legion ring on!;

These people do not sell Legion rings and there’s all kinds out there plastic, gold excetera… but if you want to really be a Legion Fan Club Member, consider getting that ring from somewhere and here’s how to measure your finger!

Of course a tinfoil-hat seems to work for some of our members and that’s fine as well!!!

@DE If I give them the finger, I’m telling them you told me to do it =)

With the excellent news about a new Legion mini (and an ongoing afterward), now’s the perfect time to check out their modern origin in this week’s selection.

I better start on these today!!! Time’s a ticking, even if I do have access to a Time Bubble!!

If you search “legion secret” this comes right up.

This is considered part of the Post Infinite Crisis “Retro Boot” team books. While it came out at the same time (late 2011) that New 52 launched, it doesn’t have New 52 in it’s logo like the other Legion titles of that time did (there were a few other series like that at the time too).

The stories though are fairly short like the New 52 titles, so I’ll look at two at a time between now and Tuesday. So far, what really is impressing me is the art and the color of these books: very “pastel” bright and positive stuff, no murky feel at all in spite of some of the dire settings.

So far the two characters really focused on are Brainiac 5 and Phantom Girl. The other characters, Triplicate Girl, Lightning Lad, Cosmic Boy and Saturn Girl so far are more in the role of action hero body guards for Mr. Brande.

I do like how Levitz is highlighting the powers that be both obvious and shadow for the fictional world of the Legion so far.

This last page of the first issue highlights the art style, color tones and political intrigue of this series. 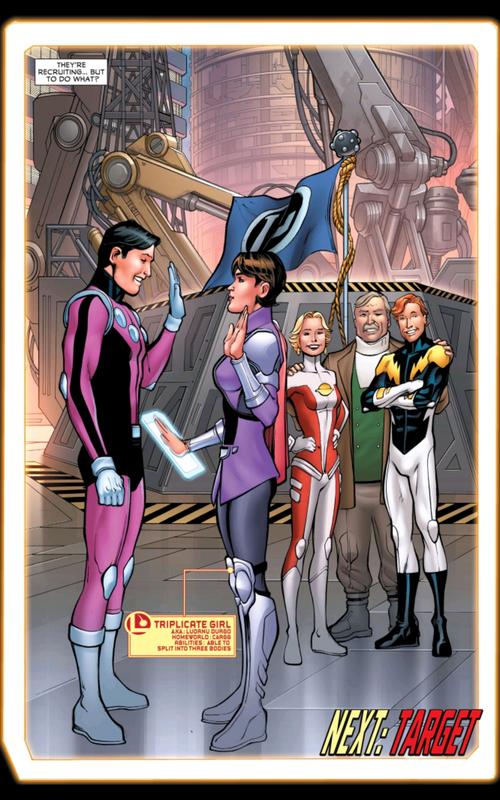 I’ve only read the first three issues, interesting stuff. Big thing I’ve thought so far: in a mix of the weirder way that RJ Brande speaks and excitement for the upcoming game, I’m now hearing him in the voice of Marcus from the Borderlands series. He kind of looks like Marcus a bit too.

Here’s an example of the voice of you’re not familiar: https://youtu.be/BFHW0ByBZYU

Very cool! I keep hearing a voice for only certain characters too.

And you won’t BELIEVE what just got revealed now concerning Legion!!

Okay, I just finished it. Overall, it was…okay. It wasn’t bad, but nothing here really wowed me. Perfectly adequate. I think my favorite part of the book was the art by Chris Batista – great mix of action and comedy.

“The Legion of Super-Heroes is sometimes cited as a franchise that’s hard for some fans to sink their teeth into. Prior to reading this mini-series, did you agree with that assessment? If so, is Legion: Secret Origin the key that has clearly and concisely opened the door for you to confidentially step foot into the shining scion of science fiction that is the Legion?”

I mean, I think it’s very fair to say that the Legion is hard to get into. Like, the X-Men over at Marvel are often credited as one of the hardest franchises to get into with the most elaborate continuity, but at least it has only had one continuity to really deal with (outside of the odd excursions into alternate timelines). The Legion has had THREE, and soon possibly four, depending on how Bendis decides to play with continuity.

AS for the other question – first of all, mad props for that alliteration. Second, I think if I had never read the Legion before and someone handed this to me…honestly, I’d probably be more confused, if not actually lose interest. Here’s the problem with this book: it doesn’t really address anything of what most new readers would want to see in an origin story, and the things it does play with only really matter to people who have read all before. Like, I would want to know more about the actual, you know, members of the Legion, and not read pages upon pages of bland, empty shadow government dudes talking about the Legion.

“What was your favorite moment of the series?”

Honestly? I’m already starting to forget what was all in this book. Maybe the kind of interactions between Phantom Girl and Brainiac? I don’t think I’ve seen them really interact before, it was cool to see him go from confused and flabbergasted to his eureka moments – kind of reminded me of The Doctor at times. Now that I think about it, maybe a teenaged Matt Smith could play a perfect Brainiac 5…

“What are your thoughts on R.J. Brande? Nice guy who wants to help the galaxy or a man with an ulterior motive?”

There really isn’t a lot to his character to really say either way within this story. I did dig the idea that the Legion’s authority was granted from more political leveraging and was rather controversial. I mean, when you think about it, the fact that the Science Police gives these largely untrained teenagers deputized power is a HUGE stretch. I mean, I get that the actual legal ramifications of superheroes are largely swept under the carpet to make them work, but it’s sort of like if Jeff Bezos enlisted a super-powered child army – everyone would be at least confused about it at first.

@Jay_Kay Thanks for your thoughts, they’re always worth reading.

Thanks too for your alliteration awareness

The mystery of who is trying to knock off Mr. Brandt continues to deepen. Now we are finding whoever this is they have telepathy powers, abilities with inanimate objects, and can travel time…hmmmmm. And they seem very set on making sure the Legion never forms, and even stop the famous meeting between the Legion and Superboy!

This continues to be a fun light read. Admittedly this isn’t the Great Darkness Saga, but I am enjoying the reflection on the effect of the Legion on the Science Police’s efforts to recruit the same age group, etc.

What Phantom Girl says to Brainiac 5 I echo to the greater DCU: check out the Legion, it’s deep and fun!!! 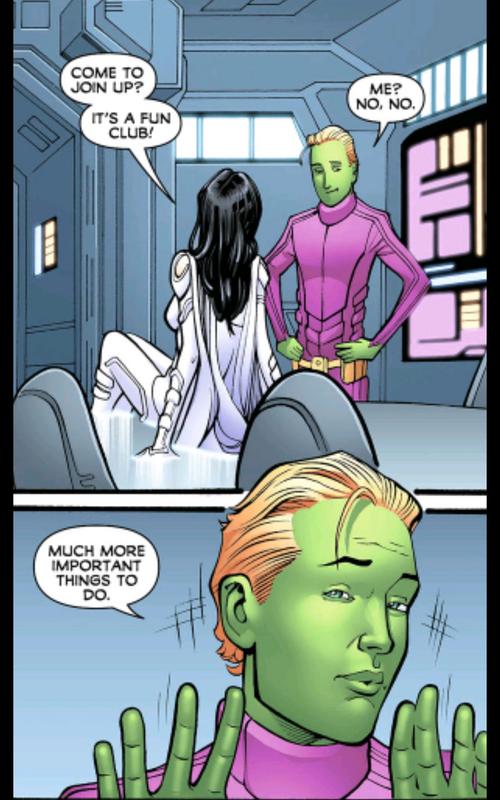 You know, Jay_Kay, this one, lol…I gotta remember to finish this up today, since the new Legion selection will be posted around noon Eastern tomorrow!!! I wonder where the Time Bubble will take us this time???

For now while we wait for Community 2.0 to launch, we temporarily have the Legion Club House over on this DCU Bookclub Discord site: https://discord.gg/Q6Y63sX

It’s very generous of them to let us rent a room for free during this time of construction!!!

The writing and art kept the quality going, which is great! Little is more distracting then when writers and /or art teams leave a series after 4 or5 issues (like with Legion Lost that we just read).

I enjoyed seeing the core team appear in this story. It was also "keen"seeing Phantom Girl play such a pivotal role as well as comedic relief, much like her ancestor does in the Terrifics now.

Seeing them so young brings up the continuity issue that Jay_Kay alluded to in his write up above: there are at least 3 or 4 versions of the Legion over the decades since they appeared in the late 1950s, like other teams such as the Doom Patrol. I appreciate this version (and the classic and Jim Shooter '60s versions we’ll return to soon) since much of the energy and positive “we can do anything” vibe of the Legion is from their youthful outlook; life hasn’t had a chance to really beat them up yet (I’m looking at you, Batman).

Part of why I suggested we start a two year Legion club is so I could take the time to read and discuss all this in a disciplined manner (in other words, if not for these clubs months could go by where I didn’t read anything). I think I lean more towards the mid-20s more mature version of the Legion (and also of Titans); but at this point in my life, I also need to believe in that youthful posiitve outlook to life as well that the late teens versions of both Legion and Teen Titans brings.

Rating of this series: a solid 8 out of 10: a fairly-short plot line was stretched over 6 issues, but a fun read and great artwork. This Brainiac was one of the more likable egotistical versions that in other storyline sometimes leans heavily into a sociopathic “hero.”