You are all invited to join the [Legion Fan Club] for the storyline “ENEMY MANIFEST” in this last Legion run ever by Legion Superstar writer Jim Shooter, 44 years after his initial run in the ‘60s! This is a solemn occasion, dudes and dudettes! 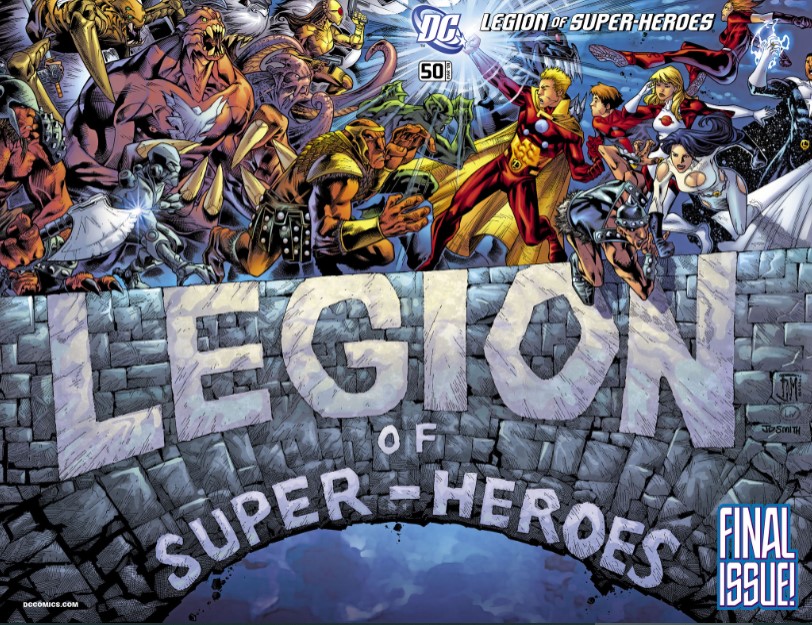 LEGION OF SUPER-HEROES (2007-) #45 “ENEMY MANIFEST.” Part one ! A massive intruder planet has appeared near Jupiter—and its gravity is ripping apart the solar system! LoSH 08 #45

LEGION OF SUPER-HEROES (2007-) #46 “ENEMY MANIFEST.” Part two! Chameleon’s hand is amputated! The menacing Intruder Planet is revealed as the source of the alien Life-Eradicators! Plus, the heartbreaking end of the oldest relationship in the history of the Legion! LoSH 08 #46

LEGION OF SUPER-HEROES (2007-) #47 “DREAM WEDDING, BLIND LOVE.” While war looms and a traitor plots against the Legion, Brainiac 5, whose dreams are haunted by the ghost of Dream Girl, seeks help from a spiritualist. LoSH 08 #47

LEGION OF SUPER-HEROES (2007-) #50 “ENEMY MANIFEST.” Part five! “Hack the Infinity Net” finds Brainiac 5 uploading the Legionnaires into the Infinity Net for the sake of all existence! LoSH 08 #50

Next week, for sure we’ll do the Wednesday night Watchalong safe and at home, and also do a little light Legion reading, circling round the date January 1980!

Okay, I’ll have to check this one out!

Took me a little bit to get to this, but some sitting in bed reading caught me up.

Overall, the scale of this run was fantastic. Can you imagine a bigger threat than an immaterial enemy who has turned the universe into a supercomputer to virtually live in? Just the imagining of this threat was a creative leap and pretty fantastic.

So I did look up why the run ended. Jim Shooter does not hold back. In an interview with CBR he clearly thinks it was personal and not because of a failing title. That DC was looking for a way to push him out the door. It does seem like there were a bunch of small hiccups with production of the title, and that he was vocal about those hiccups which helped lead to the ending of the title, but I do like the fact that he also takes a big part of the blame himself. Rightly or not, an author is the lead creative developer on a story line and everything flows from there. That was big of him.

The attack of the planet was cool. I like how Brainy basically bullied the Star Boy and Light Lass into using the upmost of their powers to stabilize the planet.

I don’t want to touch issue 47. It was an interesting read and I like the progression of Brainy and Dream Girl. Apart from that, I do like Brainiac’s rationalization of cutting off Chameleon’s hand - and further explanation of Chameleon’s powers.

The ending was pretty good - but I’m said the Princess Projectra storyline didn’t get to end, and feel the Dream Girl / Brainiac storyline was shoehorned in. You can definitely tell there was more story to tell and that this was a quick ending.

I think the character interactions were a strength. The development of Lighting Lad as leader was great. The introduction of M’Rissey (I think I got it right) to run the business aspects of the Legion was fantastic. He was a great character to fill a need. I liked every scene with him.

The membership tryouts were great as well. You could tell Shooter was setting the characters up to be used in different ways - especially when talking about their strengths and weaknesses - and how well they would pair up with existing Legion members. They weren’t “throw-away” characters - rather characters that could stick around.

I thought it was a solid enough story, right up until the last issue. You know you’re going to get some ham-fisted stuff when the writer writes it under an obvious pseudonym.

My basic issue with this is that I felt like the digital invaders weren’t all that interesting, especially in comparison to Princess Projectra’s eventual betrayal. I initially thought that maybe we’d get something like her joining forces with the digital invaders or actively take them over, but that whole part of the book was literally dumped at the end.

I’m not sure what was going on between Brainy and Dream Girl in his head, other than I’m 99% sure that Shooter was watching Battlestar Galactica and based it on Gaius and Six.

The try-outs in #48 themselves I thought were kind of standard, I feel like the only thing that wasn’t really done before this was Night Girl having a wardrobe malfunction in the middle of her tryout, which…I can take or leave. I did like the idea of basically making them the Legion Academy/reserves instead of their own seperate entity – that feels more realistic.

I feel like I’m being too negative, which I’m trying not to be – I liked 4/5ths of the selected reading, you just can’t help but feel like you were cut short out of something cool.

Thanks for the review, @Jay_Kay !

It’s ironic that you say “I feel like I’m being too negative” since that is basically the reason Jim Shooter hypothesizes the title was cancelled ubruptly. That’s again @Meisaj for noting this interview above):

Following news that DC's "Legion of Super-Heroes" will end with #50, writer Jim Shooter confirms he was fired from the book twice and shares what could have been for the title, including the introduction of a new Kryptonian.

I have never before read an interview with the writer where they belittle their artist’s ability like this. I’m sure it’s super accurate concerning F Manupul, but Jim S is for sure one of a kind.

I paid cold hard cash for this run of Shooter’s when it came out, but I was buying lots of stuff back then that went from mediocre to great. At the time I found it entertaining, and still do, but it is a just a curious bump in the Legion history road.

I suspect this was cancelled more due to overall sales and trends than any sinister motive.

I sure do appreciate the Unlimited model now so I can enjoy comics without feeling burnt as a fan when they are ubruptly cancelled or when the creative team is swapped out in the middle of things!

I want to investigate the Battlestar Galactica connection more tonight. I watched probably every episode of that.

I just want to confirm that Brainiac had Dream Girl in his mind while Battlestar Galactica was on or if it started beforehand.

BSG had been on a year when Dream Girl dies in Legion of Super Heroes (2005) #10. So Battlestar Galactica may well have influenced this “romance of the mind” concept that Mark Waid initiated.

I love little ties to the world outside of comics, but it’s hard to tell if the ideas between Legion and BSG were related to each other, or if they were each, independently arrived at.

Agreed. There may be other reasons why by both series dealt with that theme around the same time.

I have never before read an interview with the writer where they belittle their artist’s ability like this. I’m sure it’s super accurate concerning F Manupul, but Jim S is for sure one of a kind.

Okay, I just noticed this after seeing this bumped up and I have to say WTF about all of this. Literally one of the big things that kept this book fun to read for me was Manapul’s art. While Shooter was right about Manapul being big someday, I think Shooter was basically blaming everyone but himself for the book failing.