The “ultimate” classic era of 2 Legion series running in parallel about a year before Crisis on Infinite Universes unfolded, when one of the two series being published (Legion of Super-Heroes) was on super fine thick paper where the bright ink colors just leapt off the page! 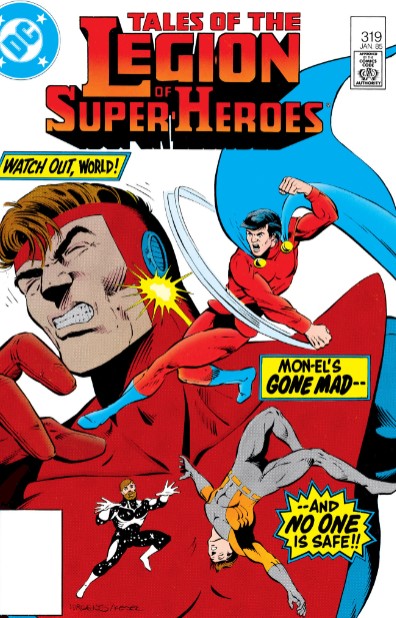 No need to alternate issues from the two series, but please enjoy this week’s double punch of action!

LEGION OF SUPER-HEROES (1984-) #8 The lost Legionnaires vs. a planetful of explosive sun-eaters programmed to annihilate the universe! LoSH '84 #8

LEGION OF SUPER-HEROES (1984-) #9 The Legionnaires celebrate their reunion and defend Hong Kong from alien terrorists! LoSH '84 #9

TALES OF THE LEGION (1984-) #319 Meet Memory-a deadly, mind-controlling villainess who’s not only terrorizing an entire planet, but is putting Mon-El through the pain of his 1,000-year captivity in the Phantom Zone…all over again! Tales Legion '84 #319

I’m gonna be honest, I haven’t even started on the Zero Year stuff yet. Been really busy with work – gotta love being “essential!” So I may be a little behind for a bit.

It’s been crazy enough for me too, even with my wife and I self isolating and hunkering down. I’m so far behind on the other clubs I enjoy ( like Doom Patrol and JSA and New to DC) but I guess I’ll use weekends to catch up.

For some reason with the business-to-business outreach marketing company I’m in, suddenly I’m getting new projects to do …like even yesterday I got two new projects to oversee. It is partially because groups like Microsoft have budgets for events, on site shows, luncheon marketing, etc, but now of course they can’t run the events so they come to groups like where I work to have us use LinkedIn outreach or even the phones to promote things like Azure Sphere for IoT to businesses. IBM is coming to us to with the funds also.

I really enjoyed these two parrallel stories. I also never learned how to properly spell parrallel and refuse to let some auto-correct tell me how to do it. If Computo is making errors, I can’t trust auto-correct.

Legion of SuperHeroes 7-9 was great. I’ve never quite grasped what the Suneaters were (other than the obvious that they eat stars), but so it was nice to see an explanation of them being a weapon created by a Dominator (at least in this sense). And did I miss it, or was it just not there, to explain who or what was the Dominator’s servant who was in charge.

And why didn’t they take him back with them to earth, rather send them back to the Dominators? I’m not sure what the thinking was there, maybe it will be picked up again later on.

The backup story in Tales #320 with Sunboy was hilarious. I’m not typically a fan of backup stories but that was great insight into the characters and how they get along.

My favorite this week was definitely the main story of #320. Just a nice tie-in to Crisis, giving hints of the Monitor (of course it doesn’t quite fit with the Monitor of Crisis) and focus on the thief. It helps that it includes a cut-away diagram of Legion Headquarters. I used to eat those kinds of things up when I was a kid.

All in all, a good week that I thoroughly enjoyed.

I found myself digging in on the large diagram plan of Legion HQ as well, and it is curious as to why that is.

I’ll take a peek again at those two odd Dominator plot points: I assume it has to do with peace treaties, diplomatic immunity etc.

It’s looking like Thursday will be new Legion reading day…and I utterly forgot about our usual first Wednesday of the month Watchalong.

Something seems to be distracting me…

No worries. If I could I’d reach out and give you the reassuring pat on the back, or handshake, or whatever is acceptable these days. Elbow touching. Waving from across the street.

The '84 Legion story was solid, really liked the whole “factory planet.” The hook was solid and it allowed each member to do something cool. The Hong Kong story was a little “eh,” but the overall character drama around it was cool.

The Tales story was pretty good too. The stuff in Shadow Lass’ world was interesting and the combo of Dawnstar and Brainiac Five is interesting. What’s funny is that I read the Tales story first, and at that time I completely forgot about how each book split the team. So when the two crashed on that planet, my assumption was that the missing teammates were on the planet and had some sort of brainwashing/mind control.

It says something about Mon-El’s strength of character to have gone through all that – a thousand years of not being able to touch anyone, to witness and listen to horror stories from the most dangerous criminals from Krypton, and still be an optimistic and strong hero.

Considering the club I help run, seeing the descendent of Batman was pretty cool, though I wish he stuck around a little longer…

I hope you’ve been able to take a look at the new Bendis Legion @Jay_Kay , because if you like seeing descendants of Batman show up, you can’t ask for much more than a whole planet and Damian…

I’m a few issues behind on the new Legion, but it’s been pretty interesting so far.