[Legion Fan Club] solemnly presents: Legion: The End of an Era: A tie-in to the Zero Hour: Crisis in Time miniseries, it is the final story arc in the Legion of Super-Heroes’ original timeline and marks the end of 36 years of unbroken Legion continuity. Yup, for quite a while this version of Legion that began circa April 1958 will disappear from DC Comics completely. 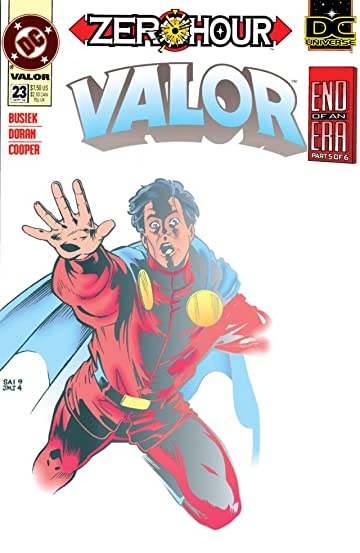 LEGIONNAIRES (1993-) #17 “End of an Era” Part 1! The ongoing struggle to reshape reality has stretched the 30th century to the breaking point, and even the Legionnaires may be unable to restore that shattered timeline! Legionnaires 17

VALOR (1992-) #22 As time continues to unravel, Valor rejoins the Legionnaires in the 30th century, and with the structural integrity of New Earth in jeopardy, Valor must rebuild an entire planet. Kurt Busiek – Writer Colleen Doran – Art! Valor 22

LEGION OF SUPER-HEROES #60 End of an Era’ part 3. The Legion of Super-Heroes and the Legionnaires join forces as time continues to unravel. But even the combined might of these two teams may not be enough to stop the alliance of two of their deadliest foes. LoSH 60

LEGIONNAIRES (1993-) #18 A ZERO HOUR tie-in! “End of an Era” part 4, continued from LEGION OF SUPER-HEROES #60. As ZERO HOUR edges closer to the 30th century, Glorith and Mordru continue their campaign to restructure time—but their efforts bring a heavy cost to the Legionnaires. Continued in VALOR #23. Legionnaires 18

LEGION OF SUPER-HEROES #61 A ZERO HOUR tie-in! ‘End of an Era’ part 6… As ZERO HOUR descends on the 30th century, the Time Trapper returns. Only one member of the Legion of Super-Heroes is left standing to confront him…and the Trapper’s been waiting for him! LoSH 61 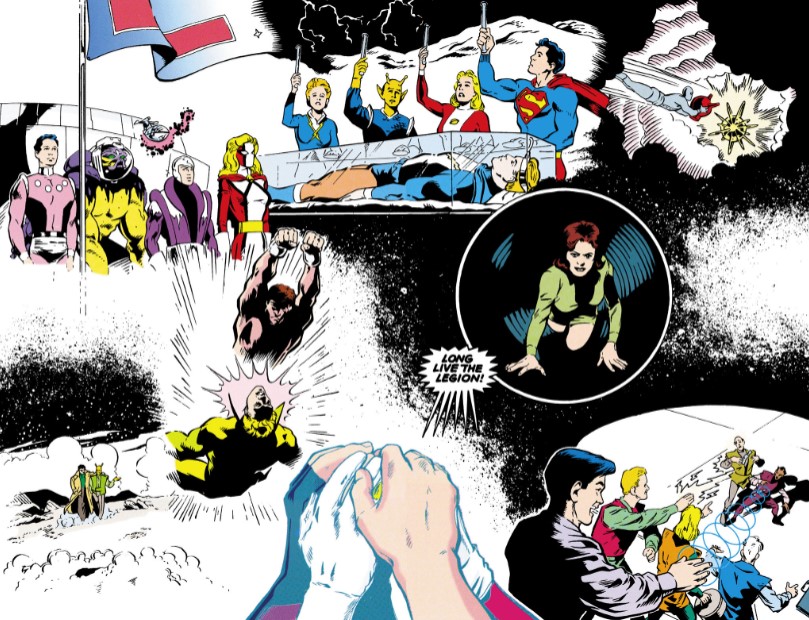 NEXT WEEK: We zigzag our way back to the “ultimate” classic era of 2 Legion series, when one of the two series being published was on super fine thick paper where the color just leapt off the page atcha! Stay safe!

So I dove into these. Maybe it is my nostalgia for Zero Hour as it was one of the first cross-overs I followed, but I was glad to be reading some of these issues and think, buried somewhere in my comic collection, I have some of the issues despite not ever collecting these titles (I know I have Legionnaires 18 and think one of the Valor issues).

Valor is an interesting take on Mon-el. I like the idea of a character that knows he will have a huge legacy and is trying to live up to that responsibility. But man I disliked the art from these issues and I think that kept me away from Valor at the time. However, I do think it was nice to see Valor as the main character, as a more fully fleshed out character that could take lead in a comic book.

I honestly struggled to followed such a large cast in these issues. As the Legion was whittled down it was a little bit easier to follow. Other than the relationships between different between Legion members, their actions didn’t seem to different between adult and teen legion.

Time Trapper definitely was a hero in this story line. I haven’t read a lot of Time Trapper but I like that he is such a unique character in Legion history (as I understand it). He was revealed as one character in this story, in Final Crisis he is revealed as another character. Each time he has a valid back story and reason to be a villain. I haven’t read any one-off stories, or his origin or early fights with Legion, but the times I have read these stories, Time Trapper has been used extremely well.

I love Zero Hour. Again, from early in my comic collecting life Zero Hour stood out. The counting down of issues instead of up, the Zero issues, the crazy timeline with surprise mastermind villain (as contrived as it was) - it all spoke to me. And I loved the pull out timeline at the end of the series.

Didn’t see the bonus question til just now. I guess I spoke to the art earlier, just isn’t for me. The story was ok though, but I don’t think it was Busiek’s strongest.

@Meisaj I really thought Zero Hour was ingenious and an engrossing read at the time it came out also. Green Lantern’s descent into being a villain made good fictional emotional sense, even Hawk as a villain really didn’t seem like a stretch.

At the time, I was more involved with the storylines of the Green Lanterns and Superman than I was the Legion, so this angle is all new for me, as will be the relaunch we circle round to read in a month. I know of XS and maybe read a story or two of the upcoming 12 year era, but that’s about it.

My wife is a big Colleen Doran art fan, and has most of “A Distant Soil” space opera that Ms. Doran writes and illustrates.

I looked up Colleen Doran after reading this and she does have some impressive art. “A Distant Soil” looks interesting.

I was more into Superman and Flash (the introduction of the Speed Force and Impulse blew me away) at the time as well, it was right when I was mid-high school and about to fall away from comics for a decade or so, Zero Hour was my last hurrah for a bit.

Some things never change about the Legion, even in the year 2020! 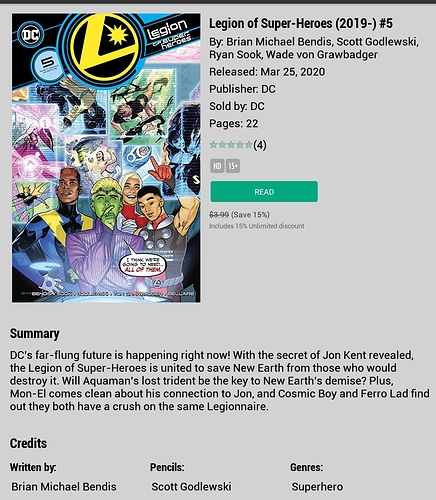 It’s looking like the new Legion reading again will be posted Thursday. Thanks everyone for your patience!

Before I post the new reading, I did want to leave a couple final thoughts about this particular run.

While I enjoyed the main Zero Hour event, this particular tie in with Mordru and Glorith wasn’t super enjoyable for me. The attempts to show the timeline continually moving around just made things confusing, not entertaining, for me anyway. I felt kind of like I do when somebody who’s a big movie buff keeps making jokes and remarks that are supposed to be funny as they quote different movies and I have no idea what they’re talking about …that’s kind of how I felt this one. Part of that may be because I haven’t read much of the Legion series that featured the older Legion characters that ran parallel to this and probably some of the allusions were to that.

I am eager a month from now to read the Zero issues that happened after Zero Hour for Legion and see how they reconstitute it.

It took me a long time to find issue 61.

I cry every time i read it.

The older version is my Legion

What came next was interrsrting

It is clear interesting and gives the origin without any hint of Superboy.

I recommend it for new readers of the Legion.

But it is not my legion.

Have you checked out Bendis’ version of the Legion yet?

I bought all the issues

Haven’t read it yet

Not looking forward to it

If Doomsday Clock is correct.Clark was Superboy andthus there was no rrason to age Jon up to teenager. Also I think Bendis say he was tortured all those years. I get the impression Jon.still a ten year old in 17 year old body.

Okay, I know, this is WAY back. I’m going to try and catch up a bit with some of the reading here while going forward with the current books. Actually finished these in one work day, so that was nice.

Having only read these couple of issues of Valor, I’m honestly at a loss as to how Valor was in any way different from Mon-El. He literally feels like the same guy with a different name and I don’t know why this is the case – or more likely I have read a reasoning in the past and I just forgot.

Jaques being a former President is a neat detail. Outside of that, a lot of it was just…odd. Like, was Older Brainiac 5 in a fat suit? What was up with Tyroc looking like a Matrix battery? What kind of magic spirit gum was keeping Dream Girl’s costume together? Maybe if I had read more of their series their stuff would have more impact, but as is…eh?

I guess they were going for an anti-hero or tragic villain, especially considering who’s under the shroud. That was another odd decision, like…really? Cosmic Boy was the Time Trapper the whole time? And he was trying to protect them the whole time? That’s…hard to believe.

I haven’t really read enough of the event to judge it. I’ve really now only read these Legion issues and the Superman issues for that respective club. Maybe if I read the main event I’ll be more into it.

It was okay in both respects. Writing wise, the connection between Mon and Shadow Lass was well done. Doran’s art…did not feel like her art at all. I feel like she may have been asked to or decided to emulate the more 90s Image style that was going on at the time and it just didn’t resonate with me.

I guess overall the best thing I can say about this arc is that it sets up the Reboot Legion, which I’ve liked a nice amount of the stories of theirs I’ve read, so there’s that at least.