[Legion Fan Club] invites you to join us in reading the first half of the final Legion run by Legion legendary writer Jim Shooter with: LEGION OF SUPER-HEROES (2007-) #37 – 44 “Enemy Adventus / Enemy Rising” 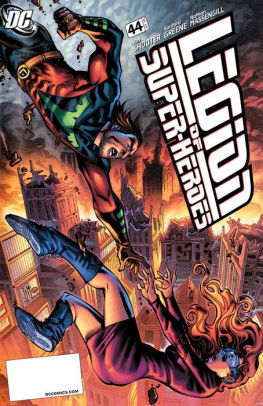 LEGION OF SUPER-HEROES (2007-) #37 LoSH 2007 #37 “EVIL ADVENTUS” part one. Several Legionnaires find themselves in mortal peril as the universe is faced with a frightening and mysterious alien threat.

LEGION OF SUPER-HEROES (2007-) #39 LoSH 2007 #39 “EVIL ADVENTUS” part three. The fortunes and status of the famed Legionnaire Princess Projectra are forever gone. But in the wake of the most devastating moment of her young life,

LEGION OF SUPER-HEROES (2007-) #42 LoSH 2007 #42 “ENEMY RISING!” Part three! The war against the powers from beyond the fringes of the universe forces the Legion into the most terrifying fight of their lives on Rimbor, homeworld of Ultra Boy—where he’s wanted for murder!

Next Week: It’s the monthly Wednesday night watchalong as we also take the Time Bubble back to mid-1979 to visit with our Legion pals Gerry and Joe again!

While we didn’t really get to see a lot about them I would have to say that they are not a very good team overall. They lack the training and finesse of other teams at this point although I will give them props for managing to get hold of Invisible Boy.

No, I did not agree with the way she handled it. Using her mental powers in the way that she did is a type of violation no matter the reason. I understand that the circumstances were such that something had to be done to prevent the situation from escalating but it may have been a better option to use a physical means rather than a mental means to control him.

I liked the art just fine but its nothing compared to his art these days. Manapul is one of my favorites and I think he’s only gotten better with the passage of time.

Phantom Girl’s was the best. She had comics after all.

Let’s just say I wasn’t expecting that twist and why do things like this always seem to end on a cliffhanger? That cliffhanger is certainly doing it’s job because I find myself wanting to keep reading to see what’s next. I may just do that after I finish reading some other stuff for other clubs.

Thanks for joining us on this one, @JasonTodd428 !

I don’t know why, but I almost always enjoy reading about the Phantom Girl character across the various visions / versions of Legion as well as in the animated series and concerning her ancient ancestor in the current series The Terrifics!

I don’t know why, but I almost always enjoy reading about the Phantom Girl character across the various visions / versions of Legion as well as in the animated series and concerning her ancient ancestor in the current series The Terrifics!

I feel the same about Phantom Girl myself. Also love The Terrifics as well.

I recognized the name Jim Shooter, but didn’t realize his lasting contributions to the Legion. I had to look him up and couldn’t believe he was writing Legion characters when he was 14. That’s nuts!

I thought UPYH (ridiculous acronym) was clearly a starting team. No experience working together, weak or oddball powersets. They did take down IK, but it was with him in a contained area.

It seems that Saturn Girl was the only thing that kept him from killing or harming someone on live media, that’s definitely a good thing. It is an interesting and more feral take on Timber Wolf than other Legion stories I’ve read.

And I did like the art, although I do agree with @JasonTodd428, Manapul recent art is definitely an evolution of what he has done here. I also agree that Phantom Girl’s room was the best, although

They seem like an interesting twist on the Legion of Substitute Heroes, where instead of being their own independent group that wants to someday become part of the Legion, they’re scooped up by the UP to be a Legion that they can essentially control. I like it in that it feels more realistic, though really outside of Giselle, the other characters feel really one-dimensional and uninteresting.

I can see both sides of it. On one hand, it is a gross violation of one’s mind for someone to just go in and make you do something you don’t want to do. On the other hand, ending someone’s life is arguably worse and inarguably more permanent.

While to call his tenure as LSH leader as “disasterous” would be insulting to disasters, Lightning Lad I think did the right call, basically telling Saturn Girl that she shouldn’t make this a regular thing, and telling Timber Wolf that he needs to get his anger under control.

It’s pretty good – there’s a lot already of what makes his art style so great, and it makes it all the more special to see it more refined and at it’s peak nowadays. I think it also shows a lot of how inking and coloring can vastly change a book’s look.

Also, while Manapul’s art is definitely a highlight, I also want to give a shoutout to Aaron Lopresti and Sanford Greene, who also drop in for an issue and do some pretty good art.

Honestly not a lot of them stood out to me, but Phantom Girl’s collection of comics was sweet. I did find it odd/hilarious that it seems like they just started to imply that Element Lad’s a real druggie and was “hiding something” in there. Didn’t expect that and I’m not sure how well that works.

I was pretty surprised at the quality. Usually when an older writer comes back for a modern book, often times I feel like there’s more a struggle in kind of adapting to more modern storytelling while keeping what made their previous writing work, but I was surprised at how well Shooter was able to adapt. I like that he was willing to shake things up and really create some tension and danger for the Legion.

As for the twist, at first I figured that the Legion would full on be considered an outlaw, criminal organization and I was curious as to where they could go from there. Then when the kid swooped in to save the day I was a little disappointed, because it felt a little too convenient. When the other shoe dropped about their tech being sold to a major corporation, that also felt intriguing. I’m curious to see how this will change how the Legion is run at all – though I think by this time the writing was on the wall that the Retroboot was happening and these characters were going away, so I don’t know how much of it we’ll actually see.

I’m thinking the return of Jim Shooter to this comic in late 2007 is why I started purchasing and reading Legion again. I had followed Legion up through the early 1990s, and then stopped, which is one of the many reasons I run this club, lol.

Here’s the comic order I sent the week this came out to Comics for Collectors in Ithaca, NY. My buddy Tim that owns the shop didn’t really do Previews pre orders, he preferred I just tell him what I wanted that came out that week, and somehow that worked.

I’m not even sure what I was reading in 2007. Amazing that you can recall that.

I remember trying to get onboard with Countdown but just couldn’t. This was about the time the Legion appeared in Justice League right? But that was precrisis Legion right? The same precrisis Karate Kid from Countdown right?

That’s about as close I get to remembering my comics from 2007.

Yeah, basically as the Threeboot stuff was ending around this time, we were getting books like The Lightning Saga and Superman & The Legion of Superheroes, which had the Retroboot Legion, leading up to what they would do with Legion of Three Worlds during Final Crisis.

By the way, with the last Legion thread and it mentioned “Legion” and “Final Crisis,” I was really excited for half a second that it was going to be Legion of Three Worlds than did a little “aww.”

So I really missed all that Legion “rebooting” as it was happening. For me, this version of Legion by Shooter seemed very similar to what Levitz followed up with, and then the New 52 Legion stories. I did read the Lightning Saga, since I was buying both Justice League and Justice Society at the time, although frankly the storyline eludes me now. I was just looking it over here, and what I do recall is liking Benes’ artwork and Meltzer’s writing.

As I recall there was a really cool fight scene between Batman and Karate Kid.

Maybe we’ll check it out someday. It seems to have appeared on the Google doc.

Some final parting thoughts on this “final” return of Jim Shooter to the Legion franchise he supercharged as a mere teen in the early '60s:

I can’t help but see a bread crumb trail from this storyline to what Shooter did in the 80s and 90s after Legion. 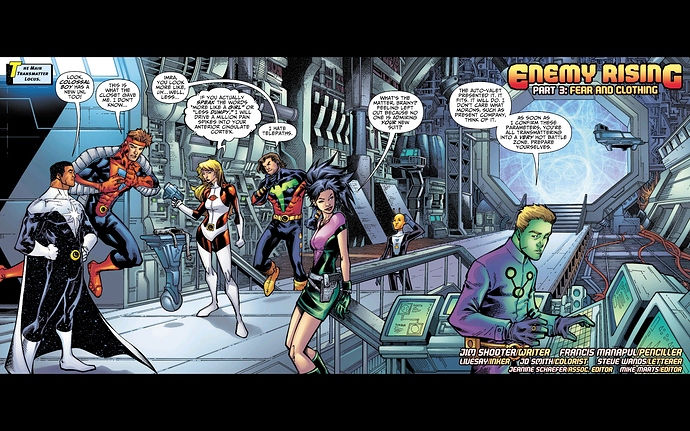 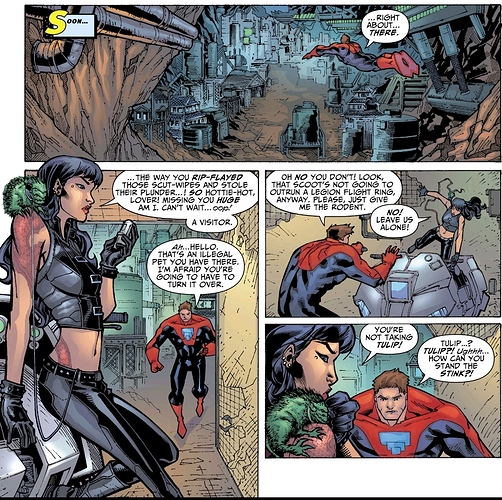 I’ve utterly forgotten what is going to happen during the rest of this Shooter storyline series, but I seem to recall it didn’t disappoint.

Some other favorite scenes this time around: 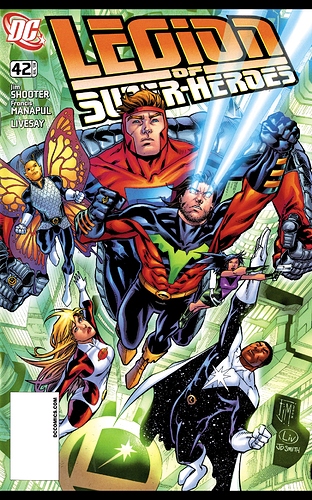 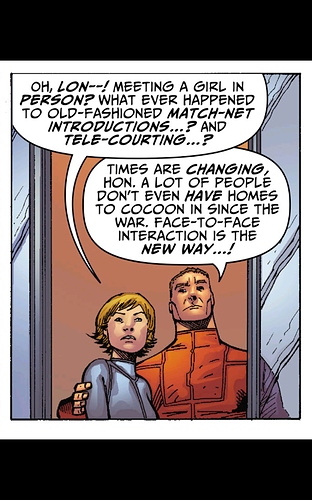 The one thing I could have lived without was Chameleon Boy chasing birds and the basic state of lack of clothing or modesty in the “dorm.” It really went beyond what we’ve seen overall so far in mixed communal settings by either Levitz / Giffen or the Bierbaums. 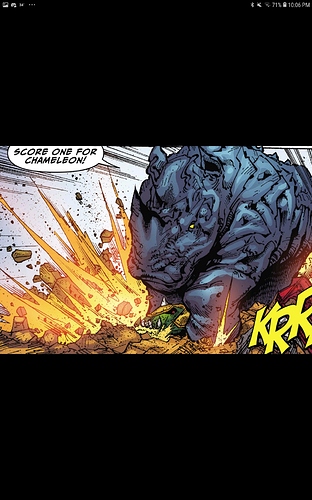 That reminds me of a couple of other good moments with Chameleon: 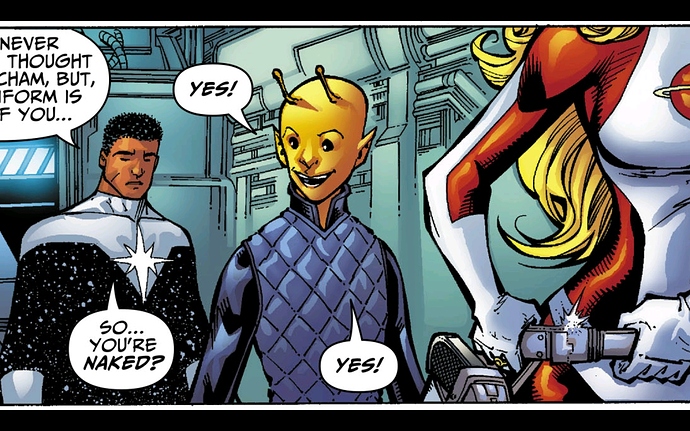 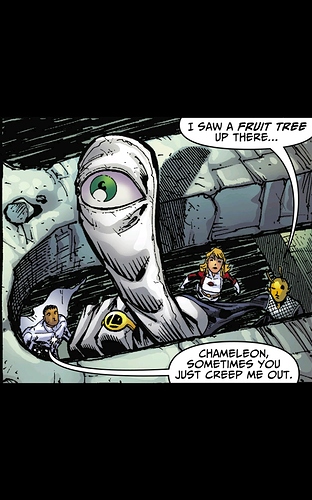